And the envelope: The Nats best clutch hitter is….Max Scherzer! 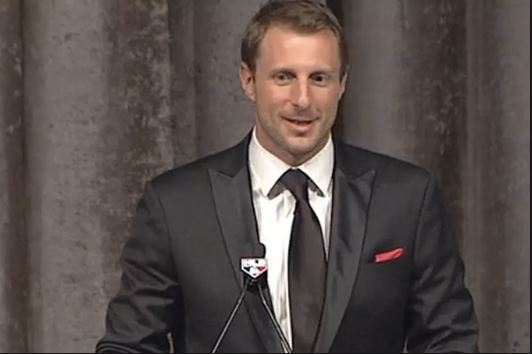 For a batter to hit just every five days, you would expect they would get a little rusty. For Max Scherzer, he has found his groove. While his sample size is very small, his batting average is impressive especially with runners in scoring position. The fourth and final run the Natioanls produced on Sunday night was from an RBI single from Scherzer that stood until the 9th inning as the game-winning RBI until a blown-save ruined the night. Not only is Max Scherzer looking like the man for all seasons, he needs to start getting some pinch-hit appearances.

When Dodgers reliever Pedro Baez came up-and-in on Scherzer and plunked him, it was either an awful pitch that got away or a sign of respect to get Scherzer off the plate. If it was the latter, it was a real sign of respect that ‘real’ hitters get.  Scherzer has no power due to his low launch angle which won’t lend itself to a prolific slashline — but he is getting his hits: .308/.333/.346/.679

The instructions Max Scherzer received from a young fan on how to hit a home run:

Got a book from a big Nats fan.. I now realize in order to hit a home run I have to swing VERRRRY hard! #TurnNBurn pic.twitter.com/xkW6Rut1PB

“Scherzer is only averaging 80.5 mph off the bat this year with a non-fear-inducing -4.1° average launch angle,” Casey Boguslaw who writes for The Medium said.  “You won’t be leaving the yard with those numbers.”

Pitchers who rake is a very small club and Scherzer wants to be on that list. He is not leading MLB in pitcher’s batting average. Vince Velasquez holds that mark at .400 and Shohei Ohtani is unquestionably the best hitting pitcher in the big leagues, but give the 33-year-old Scherzer some credit for making an impact with the bat even if his exit velocity of 80.5 mph won’t light up the radar gun like his blazing fastball or his groundball ratio as a batter at which has a -4.1° average launch angle — but all of that is leading to a very good contact rate with only an 11.1% K-rate which ranks 2nd best on the team trailing only Adam Eaton.

Maybe this is a lesson to batters like Michael Taylor that contact is the key. Scherzer certainly knows that as a pitcher that the probability of a ball in play (BABIP) sometimes becomes a weak hit which is why Scherzer prefers striking out batters and controlling his own destiny.

When Scherzer has runners-in-scoring-position (RISP), he really turns it up a notch and leads the Washington Nationals with a .556 batting average. Sure, the sample size is miniscule, but something has changed in Scherzer’s approach.

Even Fangraphs has Scherzer as a top position player who gets high marks for defense and even baserunning and rated as a +0.4 WAR. He has really turned into the complete player. What is the difference? Last year, the reigning Cy Young was not taking batting practice because of that stress fracture in his knuckle. This year, he takes batting practice daily and studies the opposing starting pitcher.

“He wills himself,” batting coach Kevin Long said. “You know what the other thing is? He works extremely hard at it. He hits every day. He’s pulling one of us — Joe [Dillon], Bob Henley or myself. He works at it. He’s diligent in his work. He’s always asking questions. He wants to know the answers to why this happens or how he can do this better … Stuff you just wouldn’t expect your pitcher to pay attention to, he does.” 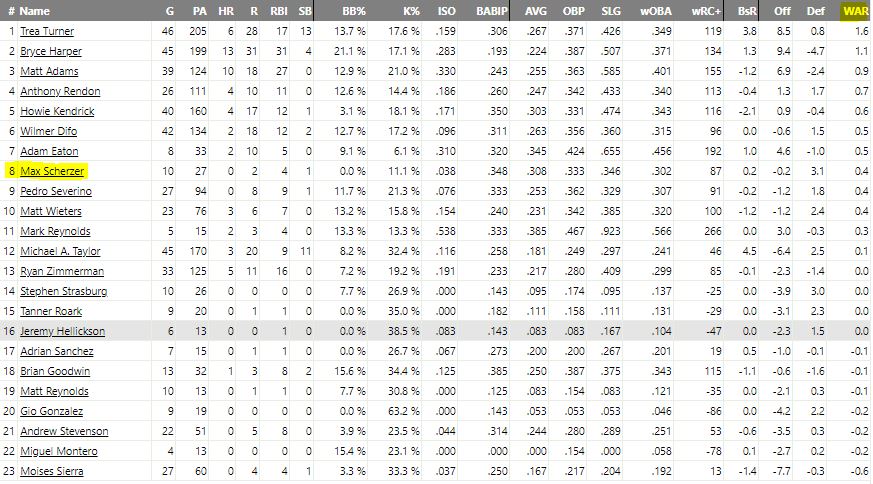 Other teams will begin to take note and pitch Scherzer inside and work on some shifts. Manager Dave Martinez has been batting Scherzer 8th in the line-up but with all of the injuries, is it time to move Max up to 6th or 7th in the order? Probably not as you want that element of surprise at the back of the order when the pitcher relaxes and that is when Max Scherzer pounces. For all he does, Scherzer is quite humble.

“I just want to make the pitcher work,” Scherzer said.

This entry was posted in Scherzer. Bookmark the permalink.
← Previous Article | Next Article →