When last we left the Nats, they had just escaped the first 18 games of the season with a 9-9 record by winning the first two games of a series against the then-division leading Mets at Citi Field.  9-9 seemed like a better record than they deserved after 2-8 stretch in the middle of that set, including a five game losing streak. But they trailed the Mets by only four games.

Eighteen games later, the Mets have come all the way back to earth and then some, losing the NL East lead on May 2 in the midst of what became a six-game losing streak. The Nats have almost caught up to the Mets, and trailed the now-division leading Braves, yes, the Braves, by just a game and a half as of Tuesday morning. They did this by what was almost a Mr. Hyde and Dr. Jekyll performance — 2-7 in the first nine games, including a four-game losing streak, and 8-1 in the last nine games, winning a season high six in a row.  So once again we’ve seen flashes of brilliance and flashes of mediocrity.

The game by game batting summary reflects that:

The Nats scored three runs or fewer in half of the games in this set.  They managed to win three of those games because of great pitching performances. But when you score fewer than four runs half the time, you’re really putting yourself behind the eight-ball. The overall hitting numbers for the set show a slight, but only a slight, improvement from the previous 18 games.

This improvement came despite a big dropoff from the slugging star of the first 18 games – Bryce Harper. Take a look at his numbers:

Overall, he’s still having a great season, but another set like this one and he could be headed for a campaign more like 2016 than 2015.  It looks like the move to the top of the order, often out of the intentional walk zone, might be what he needs to get going again. More on that later.

The pitching in this set was actually pretty good, particularly the starters. In the seven losses in the first half of the set, the pitchers gave up more than four runs only twice.

Jeremy Hellickson has stabilized the back end of the rotation, delivering two decent and one quite good 5-inning starts in this set. (Watch this space in about three weeks for highlights of his best start this season, and in many years.)

And Max was downright brilliant in all four of his starts, though he couldn’t complete the seventh inning in any of them. Check out the summary of the starters’ work in this set.

Note that Helly had the best WHIP of the staters and that Max averaged over 10 Ks per game.  Also worth noting is fine work by Gio and Tanner. They are quietly making a good pitch for the best 3 and 4 starters in baseball. In fact, by fWAR, Gio is having a better season than Stras (7th in the NL vs. 10th after Game 36). Gio doesn’t get a lot of love around here, and he isn’t going deep into games, but his 2.33 ERA through his first seven starts is —

One of Tanner’s best outings came in the first game of the set, and the last game of the team’s series with the Mets. The Nats took a 4-2 lead into the bottom of the 8th. Then what looked like a very satisfying series sweep was ruined by Ryan Madson’s ignominious meltdown in a third straight day of pitching. He sat down for 6 days after that one, so let’s hope Davey learned his lesson. A.J. Cole also made his last appearance as a Nat in that game, giving up a grandslam in the 9-run eighth. Fare the well A.J. Knowing how much Rizzo likes you, you may very well be back.

After an off day, the Nats got back in the win column behind Max in a much hyped, but ultimately one-sided duel against Clayton Kershaw. This year, only one of those superstar pitchers has been super – Max. The superlatives just keep on coming.

But then, without Max on the mound, things fell apart. Four straight losses, two to the Dodgers and two to the Giants. The Nats scored a total of eight runs in those four games and were also shut out for the first and only time so far this season, managing just two hits off of Ryu, Cingrani, and Jansen in a 2-0 loss to the Dodgers.

No reason to dwell on that swoon because with their ace back on the mound, the Nats’ bats woke up. A 15-2 shellacking of the Giants included a number of huge offensive days, including TTO going 5-6 and Andrew Stevenson (!!) going 4-5 with 4 RBIs. But the game was most notable for the breakout performance of Matt Adams, who had a homer and 6 RBIs on the day.

The Nats returned home with high hopes after their “happy flight,” only to run into the Arizona Diamondbacks, who were then, and still are, the team with the best record in the National League and had won eight straight series coming into this one.  They soon had won their ninth straight, as The Nats proceeded to lose two successive one-run ballgames, unable to come up with a big hit when needed, or to overcome a brain freeze by their young manager in a key moment of Saturday’s 4-3 defeat. (Click on that link only if you want to be painfully reminded of what happened in that one.  Can a manager be guilty of a TOOTBLAN?)

There were some harsh words about Davey’s performance in that game around here. Disappointed fans managing from comfort of their couches are geniuses of course.  I know because I can do it with the best of them. As usual, Twitter reaction was a bit over the top. Please excuse the monikers and language of some of these “fans.” 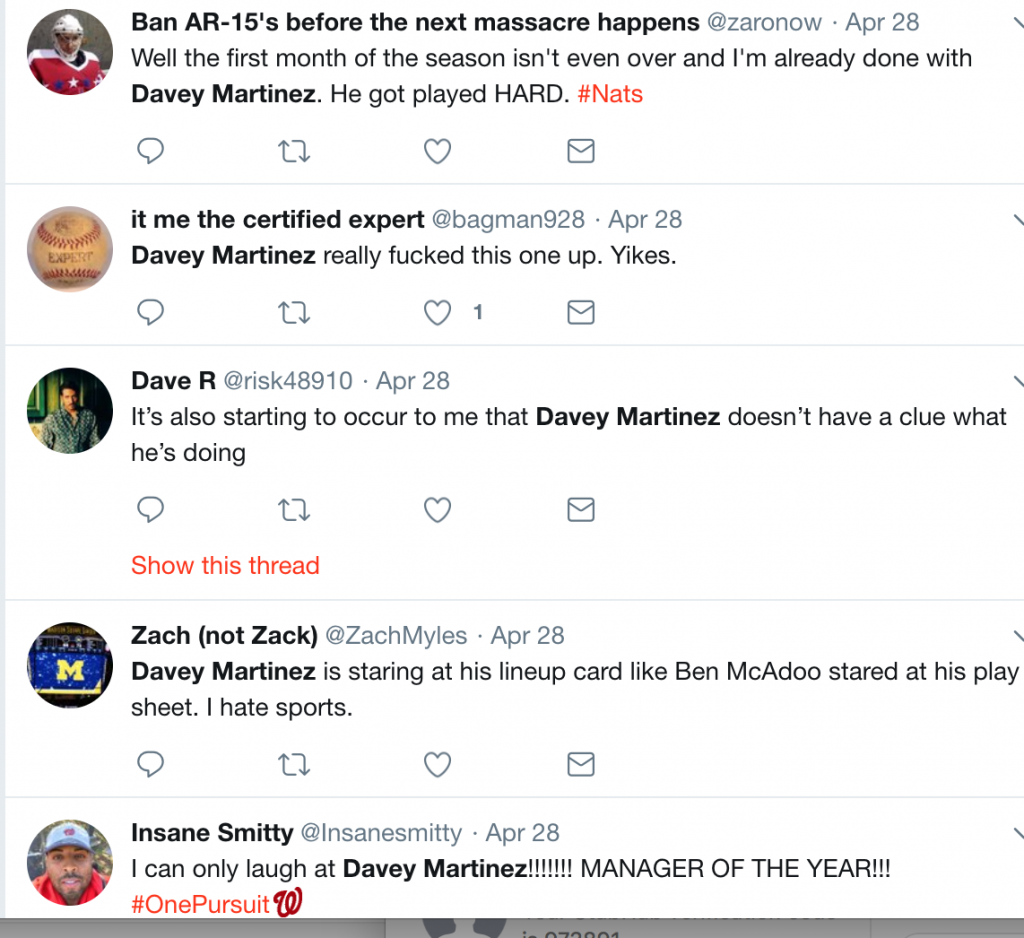 The team did manage to salvage one victory in the series, taking the series finale in a battle of lefties, one of whom the Nats traded for (Gio) and one of whom they traded (Robbie Ray). Sadly for the D-backs, Ray left the game with an oblique strain after 1 1/3 innings and was put on the DL the next day. He still hasn’t returned.  Gio turned in a 7-inning, 6-hit gem, the first time he has pitched seven innings in a start since September 20 of last year.

Little did we know after watching them scratch out that win that the Nats had just started a six game winning streak and their most their most productive offensive stretch of the young season.

Our two rivals from opposite ends of Pennsylvania were their opponents in the next seven games, of which the Nats won six.  The 4-game sweep of the Pirates, a much better team than expected this season, coming in on a 5-game winning streak of their own, was very impressive. Tanner was solid in the first game, going seven innings and helping himself with a keep the line moving RBI hit.

The next night was a completely different ballgame in more ways that one, with Bryce leading off for the first time since 2013 and the Nats mounting another  power explosion to benefit Max in a 12-4 win. That’s 27 runs in support of the Nats’ ace in two games. Come on guys, can you spread the love around a little?

This one’s worth an extended look.

The hits kept coming in the third game of the series. Bryce again batted first in the lineup, and this time he was 3-5, including an actual leadoff homer, the first of his career.  That dinger was followed by another by “Big City” Matt Adams two batters later. Stras struck out 11. Just too much to enjoy in this game to pick one highlight.

The Nats completed the series sweep behind another good outing from Hellickson. In this one, Davey played the numbers, pulling Helly after 5 2/3 innings even though he had given up only 3 hits and no runs. The move paid off, as a rested bullpen came through to lock down a 3-1 win. Doo picked up his sixth save in as many opportunities. His WHIP of 0.44 this year is kind of amazing. And people are starting to pay attention to his advanced stats too. He’s a weapon.

(Make sure to check out the article if you have a minute.)

In the last series of the homestand, the Nats faced the Phillies, who have also been better than expected under their rookie manager and sabermetric guru Gabe Kaplan. On Max bobblehead night, Gio turned in a nice, though short, outing to best former Nats farmhand Nick Pivetta. The story of the night was Bryce, the Nats’ newly minted leadoff hitter.  His chip shot oppo boppo homer to lead off the game and then an absolute bomb to straight away center in the very next inning helped the Nats take an early 7-0 lead and coast to a 7-3 victory.

The winning streak finally came to an end the next night, a 3-1 loss. The Nats seemed to have a shot at mounting a rally in the 9th when TTO worked a LoW. Unfortunately, he followed up with a grade school level TOOTBLAN, which allowed Hector Nerris to lock down the save. At least that blunder gave some solace to a few forlorn Philadelphia sports fans.  They are welcome to watch it again if they are reading here.

I have watched this five times to forget how sad I am about the Sixers https://t.co/fwP0lefOvn

The Nats took retribution against Nerris the next night, however, pulling off a walkoff win for the ages. Max had 15 strike outs in 6 1/3 innings, including 12 straight outs recorded via strikeout, but Solis and Kinzler couldn’t hold the slim lead he left, and the Phillies took a 4-1 lead into the bottom of the 8th.  Then the Nats battled back, with Difo scoring a run in the 8th and walking the Phillies off in the 9th with a perfectly placed flyball to center that Gabe Kapler’s two-man outfield could not catch.

Oh, and welcome back TTB.

With that victory, the Nats won the series and guaranteed at least a .500 18-game set. But they ended the set the next night in San Diego on an even higher note with another power explosion by Matt Adams. That guy is crazy hot and doesn’t seem destined to come out of the lineup anytime soon. This could be causing some tension in the clubhouse.

DRAMA IN THE NATS CLUBUOUSE: Trea Turner says Anthony Rendon has informed him that Matt Adams is now Rendon’s favorite player, not Trea. Rendon disputes this report. More to come.

We’ll see how this tension works itself out as the first third of the season draws to a close at the end of this month.  In the meantime, stay hot Big City!