Bryce Harper Field will be a standing symbol of youth baseball in Washington, D.C. 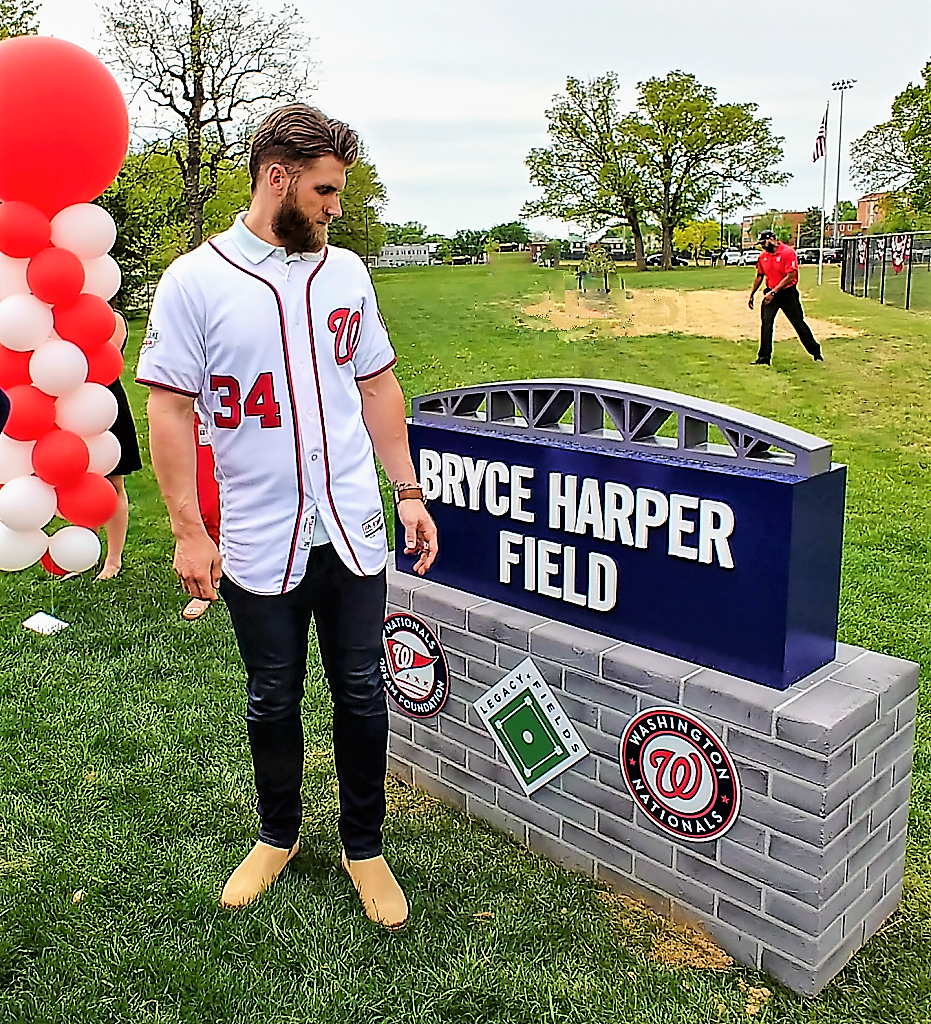 Bryce Harper Field was officially dedicated on Saturday morning and will serve as a lasting symbol of youth baseball thanks to DC Parks, the Washington Nationals Dream Foundation, and Bryce and Kayla Harper’s own contributions. The field is situated in Ward 4 in the  Takoma neighborhood, NW Washington, D.C. in an area that was in need of better baseball fields and now they have one of the best.

This is the third field dedicated by the Nationals Dream Foundation outside of their Dream Academy facility in Southeast Washington, D.C. which is a complex that is second to none. The Legacy Fields projects had dedicated Ryan Zimmerman Field and Ivan “Pudge” Rodriguez Field as their previous fields which are part of a creative vision for the Washington, D.C. area. The Ryan Zimmerman Field is located just off of South Capitol St. and can be seen by anyone traveling to Nationals Park while driving along I-395 towards I-695 as you head to the off-ramp to South Capitol Street.

The Pudge Rodriguez Field is located in Fairfax County Virginia and was dedicated last year in August as part of efforts by the Nationals Dream Foundation, in partnership with Fairfax County, the Fairfax County Park Authority, and the Mason District Little League.

Bryce Harper Field came with all the pomp and circumstance you would expect with a Bryce Harper appearance. There was a ribbon cutting, a ceremonial first pitch, lots of photos, and speeches by local dignitaries, D.C. Mayor Muriel Bowser, Marla Lerner Tanenbaum of the Washington Nationals Dream Foundation, and Bryce Harper.

“It is so important that we continue this to grow for the next generation of all baseball players,” Bryce Harper said. “All kids need to play every sport they can. It is an honor and a privilege to be part of this project.  I feel that this not only adds to the community, but achieves my objective that making sure the game continues to grow and left in a better place than when I entered it.” 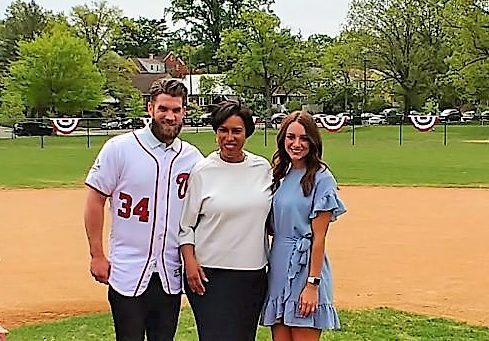 “I hope you all have fun on Bryce Harper Field,” Bryce Harper said as his last words before cutting the ceremonial ribbon.

What we also learned was that Nationals principal owner, Ted Lerner, grew up a few blocks away from this field on 5th Street and Quackenbos Street. Building the field here was just a coincidence, but some could say it was just a wonderful part of the stars aligning as their is such mutual love that Ted Lerner has for Bryce Harper and vice versa.

“It’s incredible,” Bryce Harper said about his field being blocks away from Ted Lerner’s childhood home. “They were talking about it before about Mr. and Mrs. Lerner growing up in this area. To be able to have a field in this area just goes to show how great it is and how good the community is around here. I’m looking forward to maybe seeing a game or two out here but also little kids coming out here to play sports and having fun and being on a baseball field.”

The soon-to-be 93 year old is a builder by trade but a visionary in everything he does. When the Nationals signed Bryce Harper from the amateur ranks with the 1st overall pick, it was a record breaking contract for a position player. Harper was just 17 years old when he was signed to that $9.9 million deal in 2010.

“We are delighted to be here and certainly confirm that Bryce is one of the greatest persons…and a great athlete,” Ted Lerner said in an exclusive one-on-one.

“Never thought it would happen when I was going to school here and it’s fantastic,” Ted Lerner continued on seeing this field so close to where he grew up playing on this very spot as a child. 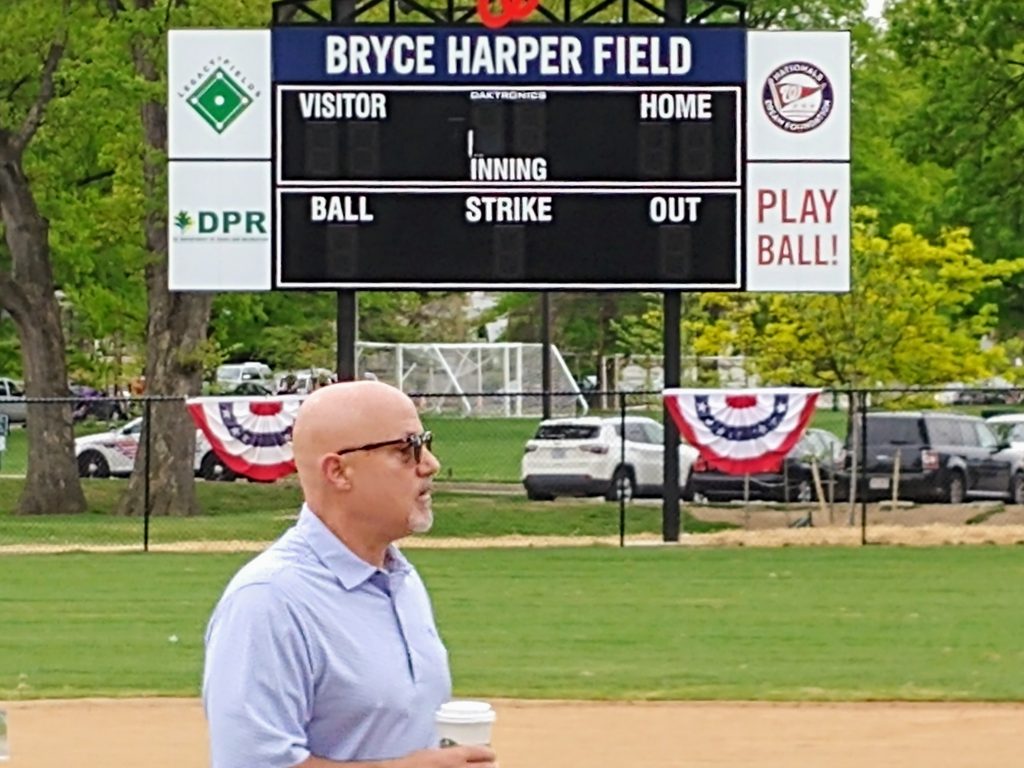 Harper has grown into a man in his tenure with the Washington Nationals, and no matter what the future brings, this field, as Harper said, will last beyond his playing years. Nationals’ President of Baseball Operations and General Manager Mike Rizzo was also in attendance and very pleased with the field and legacy this brings to the area.

“Personally it is gratifying to see the Washington Nationals reach out to communities in such a great way and the Lerner family in cooperation with all these players,” Mike Rizzo said to us exclusively in a one-on-one. “The players really love this city. Bryce Harper in particular has really embraced this town. To have his name on this field with the type of player he is, and the type of personality he is, and the amount of caring he does for this city is something. I couldn’t be happier. This i“s going to be something that will have his name on it for years to come and really brand him as a Washingtonian. To see this field a stones throw away from where Mr. Lerner grow up is amazing.”

When will there be a Mike Rizzo Legacy Field built in the Washington D.C. area is something we hope the Washington Nationals Dream Foundation considers. We asked Mike Rizzo if he could envision his field being dedicated one day.

“I don’t know,” Mike Rizzo said and that was his short and humble answer. “I love Washington, D.C. I’m in town. I live in the city. I’ve lived here for thirteen years and this is my city.”

Washington D.C. Mayor Muriel Bowser is a Washington Nationals fan and a Bryce Harper fan. She wants to see youth baseball continue to grow in the area.

The rush to finish the field was made possible by good weather this past week and a lot of work and finishing touches. It is a natural grass field with infield dirt that is a major league quality blend of 72% sand, 12% silt, and 16% clay known as DuraEdge which is packaged near Slipper Rock, Pennsylvania nearby the home of Matt Adams coincidentally. Most MLB stadiums including Nationals Park uses DuraEdge infield dirt. 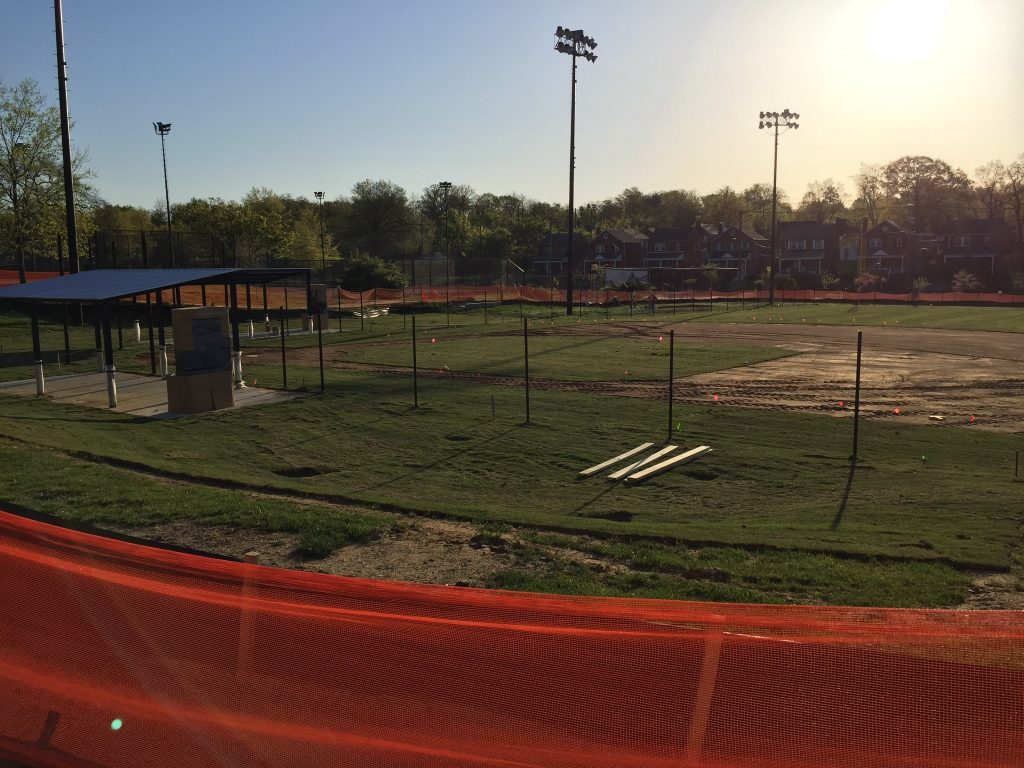 Photo from earlier in the week by Matthew Chambers for TalkNats 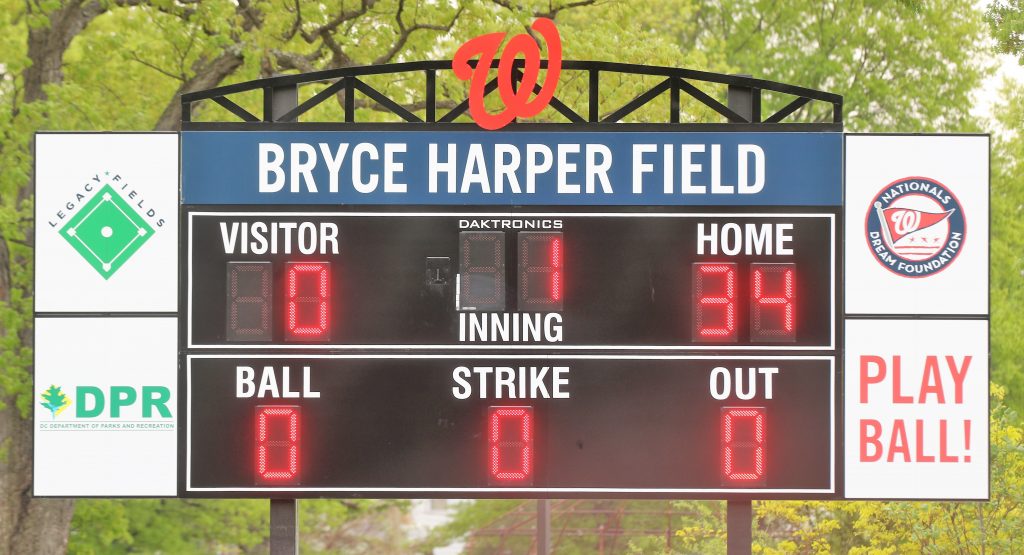