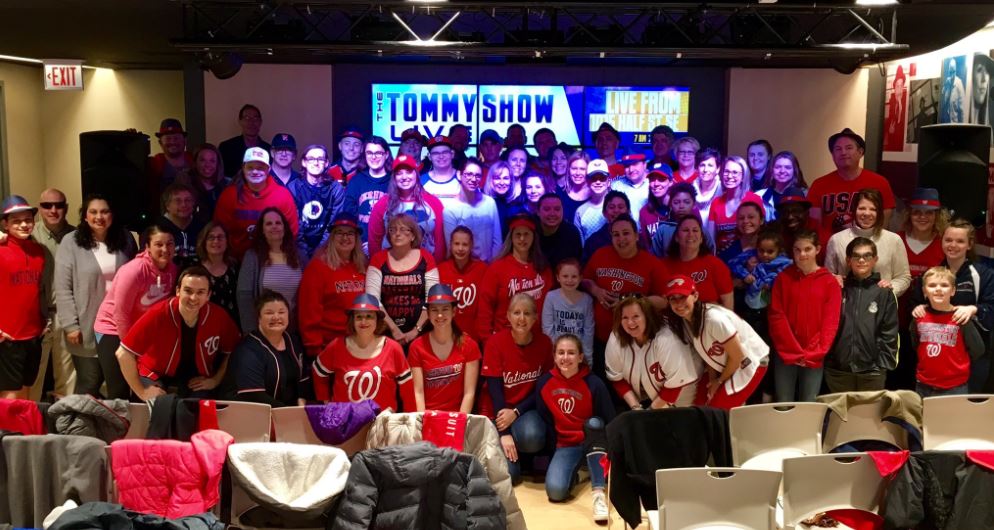 Regular season baseball gets underway this week, and 94.7 Fresh FM’s The Tommy Show got everyone pumped up and ready with a fun studio audience edition of their morning show that doubled as a Nats pep rally. There was a packed house for a lucky eighty Nats fans who packed their District Live studio to talk baseball with Tommy McFly, Kelly Collis, and Jen Richer, and the Curly W was out in full force.

Starting bright and early at 7am this morning, fans entered the studio and enjoyed breakfast from Founding Farmers and much needed coffee from Songbyrd Music House and Record Cafe. In addition to the coffee, the Nats swag was also flowing, as the Nationals marketing department provided The Tommy Show will all kinds of goodies for the fans who came out. Everyone was given rally towels and red Curly W baseballs, and then people got either a Nats fedora, a beer stein, or a Max K snow globe.

“It was a great morning,” co-host Kelly Collis said. “To be surrounded by Nats fans of all ages [was special]! One of my favorite moments was several Nats fans that never met each other in real life but followed each other on Twitter, actually met in our studios this morning. The Nats community is alive and ready for opening day!”

It’s been a long, dark winter, Kelly. We are indeed ready for Opening Day.

Fans had ample opportunity to socialize with each other and the co-hosts, and even got to participate in the show. Frequent TalkNats photographer Marlene Koenig was one of many fans featured on-air talking about her game day superstitions, explaining that she has to be decked out in head-to-toe Nats gear, and even let in on the secret that she has a pair of pink Nats boxers.

“It was a lot of fun,” Marlene said of the morning. “Great to see so many Nats fans up so early. Tommy, Kelly and Jen are awesome in person. I like it when local broadcast personalities support the local teams. The Tommy Show is loud and proud as Nats supporters.”

Kelly Collis could compete as the biggest fan of them all. She loves the Nats and over the winter she upgraded to a half-season ticket plan to attend forty-one games. Her authenticity as a Nats fan has been infectious and it has spread to Tommy and Jen who are also often seen at Nats games. All of this Nats fandom has expanded their audience and turned into an even larger following for their highly-rated morning show.

Fans who attended the pep rally also got to see a lot of the behind-the-scenes action that goes into getting a radio show on the air. David Gaines, who managed to make it to the show after only 1.5 hours of sleep (that’s dedication!) was surprised to learn that most of the talking we hear on the radio isn’t live. He said most of what we hear was recorded several minutes earlier while the radio audience is listening to music, and is then played after the fact.

“It was a lot of fun, super well organized, high quality coffee, a free fedora, and selfies galore,” Gaines said. ”Can’t beat that. And it’s always nice to put faces with names.”

Gaines was one of the many voices of Nats Twitter in attendance that met up with people he has long conversed with on the social media platform, but never had a chance to meet in person.

Lisa Milisa, another strong presence on Nats Twitter as well as the Natmosphere, took advantage of the first day of her spring break to attend the event, and was also excited to connect twitter voices with faces.

“It was so great being around all those Nats fans, meeting some Twitter people for the first time, and getting pumped up by Tommy, Kelly, and Jen,” Milisa said.

Perhaps the most exciting part of the morning show came when a surprise gift was given to Kelly. Most of the year, she flies the American flag outside her home, but on Nats Opening Day and during the postseason, her family proudly displays a Nationals Curly W flag. Fans might remember that a thief made off with Kelly’s flag last year in the middle of the 2017 NLDS. The thief was never caught, and her flag was never recovered.

Kelly said this morning that she feels the missing flag may have contributed to the Nats’ heartbreaking loss in Game 5 (because even radio hosts have superstitions). Two listeners of the radio show, David and Ashley, knew they had to do something to right this wrong when the heist occurred, and today David, who goes by @NavyYardNats on Twitter, presented Kelly with a replacement flag on air. So for any superstitious fans, rest easy. Kelly will have the flag to display when the season kicks off on Thursday. 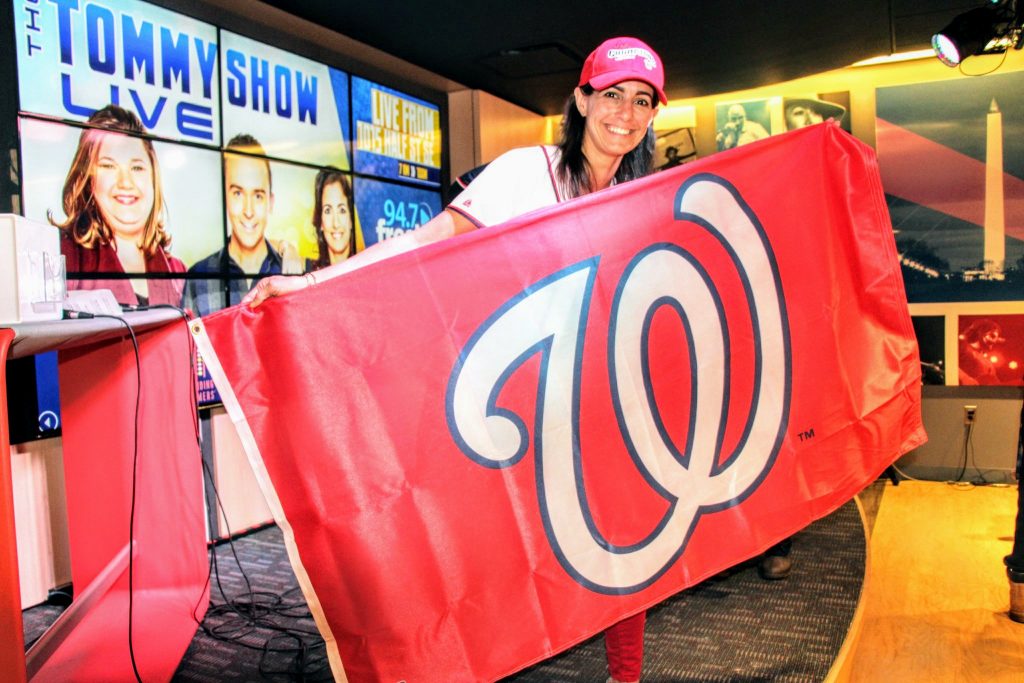 Once again, Kelly will have a flag to display when the season kicks off on Thursday, and if you were listening to the pep rally radio show, Kelly thanked NavyYardNats a few times. This morning’s show showcased the passionate Nats fan community at its best.

The pep rally was exciting, even for those of us who were not personally in attendance — but able to watch on Facebook Live. I could feel the energy of the fans there throughout the broadcast, and I am more ready than ever to get the season underway. Let’s do this, Nats. It’s going to be a fantastic year. Time to enjoy the ride and begin the defense of the NL East title.