Let me introduce you to my new favorite Nationals fan, and I’ll tell you why she should be one of your favorites, too. 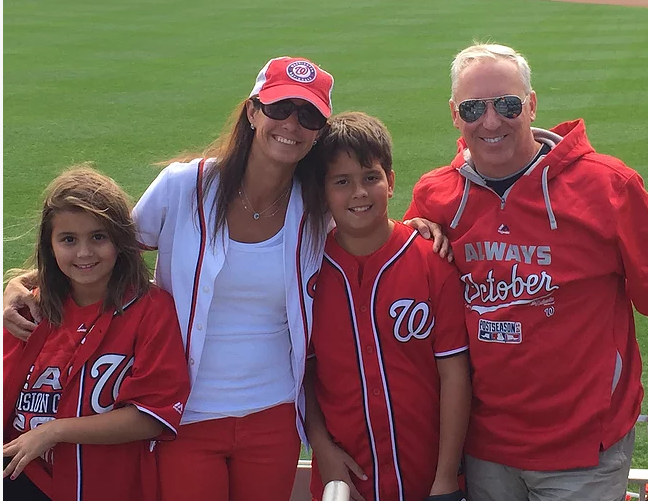 Kelly Collis from the Tommy Show on 94.7 on your radio dial is one of the biggest Nats fans you’ll find. She grew up in the DC area and spent her childhood going to Orioles games at Camden Yards with her dad and brother. She also enjoyed Red Sox games during college in New England, where she lived close to Fenway Park for two summers.

“I always enjoyed the outing of going to baseball,” Kelly told me. “I had just given birth to my first child when I heard the Nats were coming to town, and I just had this vision of going to ballgames with my first-born and really, that triggered the whole thing. I wanted him to have the same experience I did as a kid. He started going to games when he was 2 years old. I really have some of the fondest memories of going to games with him. My daughter, who was not as into it at first and was sort of the stereotypical girl, she’s now 11 years old and is just as much into it – she probably knows more about baseball than I do. And that’s really how I became a fan.”

In addition to being a great family experience with her children, the Nationals were how she bonded with her new husband.

“My husband and I first met in 2012 during the playoffs, and our first date was the day after the game [NLDS Game 5]. We met for coffee, and I was a mess. I was crying. Actually, we met for coffee, and it turned into drinks because I was just a mess. He just sat there and listened to me. I was like ‘this man must think I’m crazy, I’m crying about this team,’ but he was involved and our relationship blossomed out of that.”

I need a tissue… is someone cutting onions in here?? We could all use a person like Kelly’s Steadman in our lives. Kelly, who became a season ticket holder for the first time this year, has enjoyed almost 20 games with her family so far in 2017, and is looking forward to adding to her game tally with postseason excitement this weekend.

Like all good baseball fans, she also has some superstitious beliefs. Drew Storen is her favorite Nat (and is a reason I believe she is my long-lost best friend), and she brings her personalized #22 jersey signed by Storen with her to all the games she attends.

“Drew Storen was really my guy for multiple reasons. When I first started working in radio, he was one of the first players I interviewed in the locker room. My father went to Stanford, he went to Stanford. Turns out he was renting an apartment from one of my friends, so I think I had that kind of weird connection with him. To meet him and to know him and to talk to him, he’s an absolute delight. When I bought my jersey, I got his number 22. I interviewed him multiple times. I was the first one to interview him when he came back up after being sent down [to the minors], like literally him rolling in his suitcases to the locker room to play that night. I also loved his relationship with Tyler Clippard, I think that was a really special time in Nats history.”

Kelly has brought her love for the Nationals to the morning Tommy Show which is a Pop-music format radio show — not sports radio, and the Nats team is a frequent topic of conversation both during the season and during the excruciating horror of the off-season. Her co-hosts Tommy McFly and Jen Richer were not originally baseball fans, but Kelly’s enthusiasm has won them over. Tommy got really into the team during the heartbreaking 2012 NLDS, and has said that despite the loss, he thought it was a wonderful experience. Over the years, Kelly and the Tommy Show have cultivated a relationship with the Nationals that happened organically and naturally because their talk of the Nats was always “real” and have provided listeners with a unique perspective on talking sports that was different from what you find on typical sports stations. The relationship with the team didn’t materialize immediately, however, and had to be developed over time:

“When we first started working, we were out in PG County. The Junkies [from sister station 106.7] had moved into the studio space next door to us. Of course, I had been a fan of the team, talking on the radio about my experiences at the park with my family and whatnot, and I remember The Junkies would get bobbleheads and t-shirts that the Nats would drop off. I always thought ‘I don’t understand, it’s football season and they’re talking about the Redskins all the time,’ and it sort of became this running on-air bit about how the Nats hate me,” Kelly explained to me over coffee. “This was in 2011, and it was this ongoing bit about ‘I love them so much, but they don’t love me back.’ And then we started working with the Nats more and more as far as getting interviews and trying to bring that experience back to our listeners. Not talking so much about batting averages and RBIs and pitching stats, but having this interaction with the team that we love and what that’s like. Now we’re all fans and we have a great relationship with the Nats. They appreciate that we love the team and that we talk about them.”

As a listener, I can say that I certainly love and appreciate how much they talk about the Nats on the show. Almost every time I’ve flipped to 94.7 over the past few days, they were talking about the Nationals. What more could a girl want on her drive to work in the mornings? If you’re out-of-town, they can be heard on the Radio.com app. It’s a much more personal conversation than typical sports talk, focused more on the players and building connections with them, rather than the usual chatter like endless debates about what the batting order should be, or wading through Redskins coverage waiting to hear something about the Nats.

I asked Kelly if it ever got to her that they talk about the team as often as they do, but The Junkies on 106.7 The Fan score a weekly Wednesday call-in with GM Mike Rizzo and players will call in to the Grant and Danny show on the sister-station 106.7 also.

“It does and it doesn’t. We’re a different format. My experiences are about me being at the park and sharing that with 30,000 people at the game. I like being able to share that with other people. When you talk to a player, I’m really the only one talking to them. Our listeners don’t get that same experience. So I go back and forth. We’re currently doing a bit about Bryce Harper…so there are things like that that we try to have fun with.” 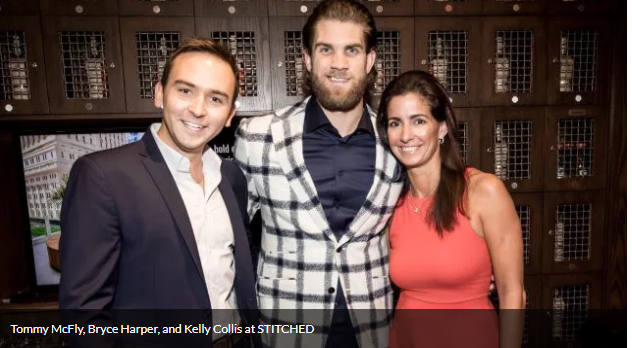 Kelly and co. have been working on getting the Nats star right fielder to call into the show, going as far as to corner him at an event recently to lobby him for an interview, and they have reached out to his favorite Las Vegas CBS radio station that he streams every morning when he wakes up to enlist their help. So Bryce, give my girl Kelly a call. She, Tommy, and Jen would love to talk to you one morning.

Kelly and the Tommy Show will be at the Halloween-themed pep rally at Nationals Park Wednesday night, which sounds like it should be a fantastic time. It will be a fun way to get revved up for Game 1 of the NLDS, and you can get to know one of the biggest Nats fans in the area that uses her platform on the radio to connect listeners with the team. She’ll definitely help get you pumped up for Friday, and will get you feeling pretty confident about the Nats chances of getting that postseason monkey off their back.

“I’m not looking too far ahead, even though I have all the [postseason] dates on my calendar. I think we’re going to clinch the series in 3 games. We’re going to win in Chicago, and it’s going to be an incredible night. It’s going to be one of those nights in baseball that we look back on as Nats fans.”

I sure hope you’re right, Kelly. This team and this fanbase have earned that kind of night. And hopefully it will be one of three this postseason.