My first days at The Ballpark of the Palm Beaches

Posted on February 15, 2018 by ArVaFan aka Laura Peebles 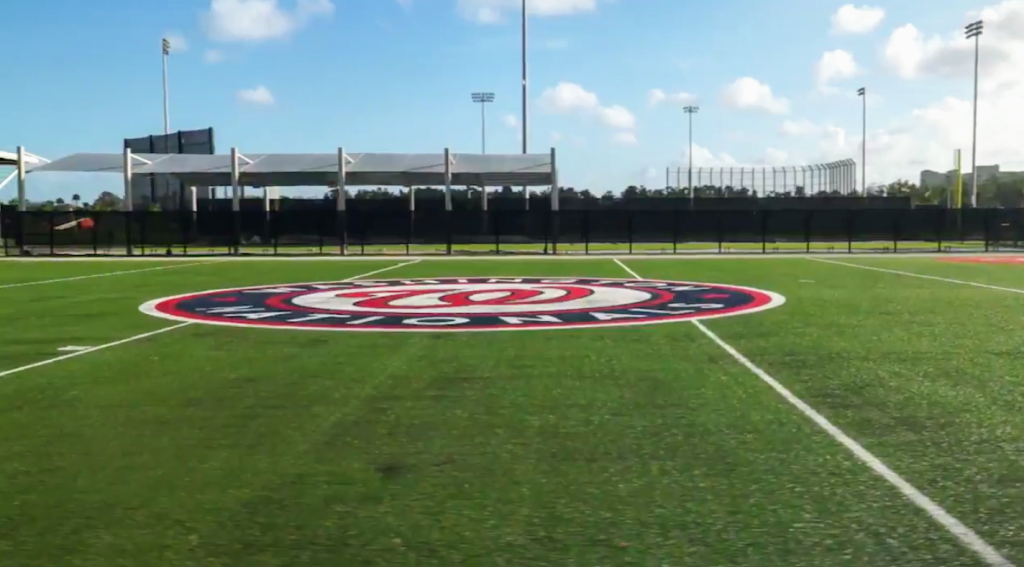 Run ‘til they tag you . . . or how to sneak into Nationals Spring Training a day early.

So, we head off for the Ballpark of the Palm Beaches. We pull into the back parking lot through the same gate we used last year, and park by the entrance we used last year (although last year we were going to games). There was only one car parked there, which seemed a bit unusual, but we were earlier than the workout schedule, and there’s a media/players lot on the other side, so we figured that’s where the official attendees were parked.

No wonder the Lerner’s haven’t signed off on the construction: the sidewalk is already cracking after a year. 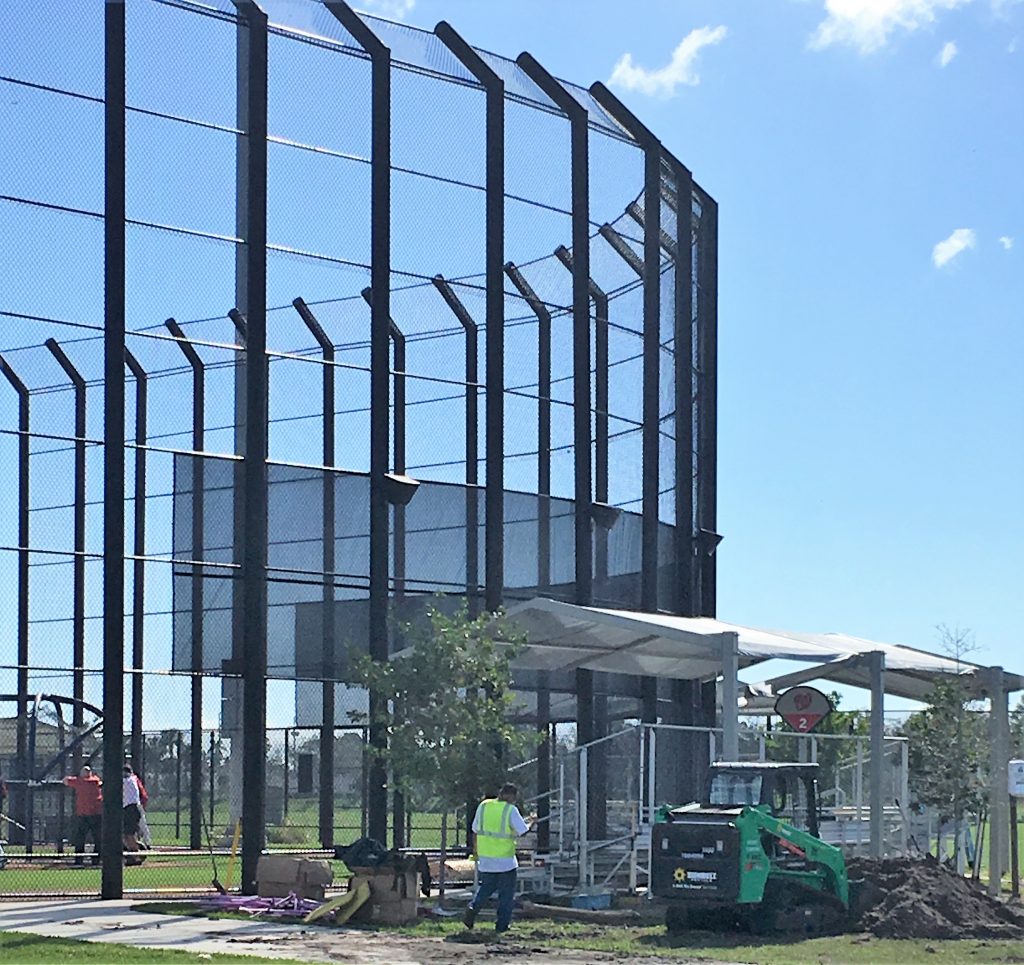 We walked past the construction still taking place on the stands for Field 2 and watched a bit of throwing practice and batting practice by the second string catchers (Taylor Gushue, Spencer Kieboom, Pedro Severino, Jhonaton Solano). 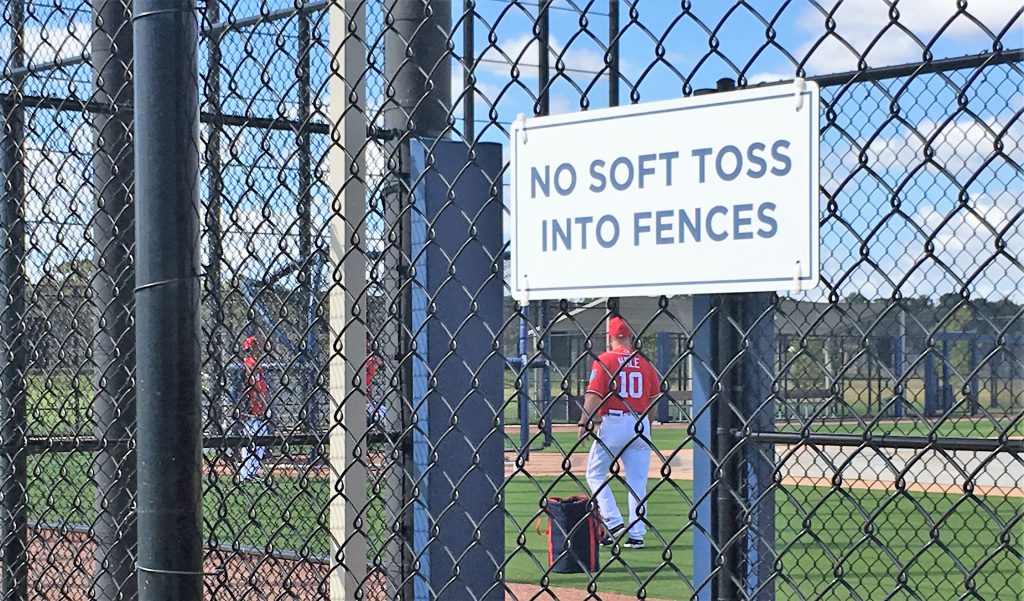 Kieboom was the only one who cleared the fence. Said good morning to a lot of the players and coaches as they walked past (Bob Henley still wears zombie-level sunscreen). When they finished and headed to the Circle of Trust meeting, we drove over to the Astros side of the complex (as directed by one of the security contractors) to get to the team store. There are dozens of turkey buzzards collected on the Astros side of the complex by the parking lot. I hope that’s not an omen (or wait, maybe I do hope that’s an omen). The Astros were running shuttles (those five-seaters used at Wolf Trap) from the lot to the area where the practices were underway. Spotted Brian McCann catching. Noticed that the Astros had a small snack bar set up for the fans on one of the sidewalks.

The driver gave us a ride up to the teams’ store. He told us that the Astros handle the HR matters for the ballpark, so he has a contract with the Astros. As a former baseball player, he got a big kick out of that: he even emailed a copy of his contract to his high school coach. The team store is about 75% stocked; should be completely stocked by early next week. Nice variety of shirts and hats/caps for Grapefruit League in general and for each team. STH 20% discount available. Nats’ photos in the store still showed Dusty.

We knew the second round of workouts were going to be in fields 4, 5, 6, so we went around to that side of the ballpark, but the pedestrian gates were locked. So we just walked up to field 5, but stayed off the warning track dirt and watch the pitchers assemble for PFP (covering first). We noticed that apparently it’s spring training for the guys marking the field, too. 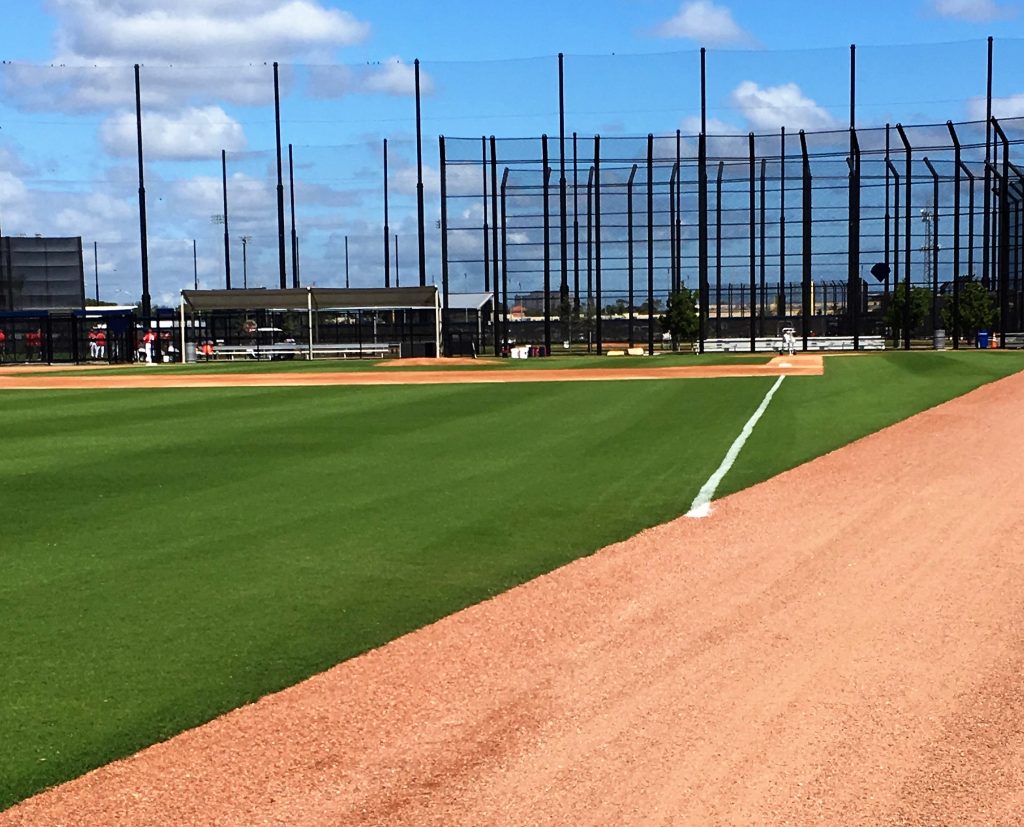 We didn’t get to stay, though, because an official person with the ballpark finally figured out that we weren’t supposed to be there. We chatted about not being able to get media credentials for the blog, and he told us how the landscape contractors had left all the gates open so it wasn’t surprising that we were inside. He then unlocked the closest parking lot gate to let us out, and said “see you tomorrow.”

Yep. We’ll be there.