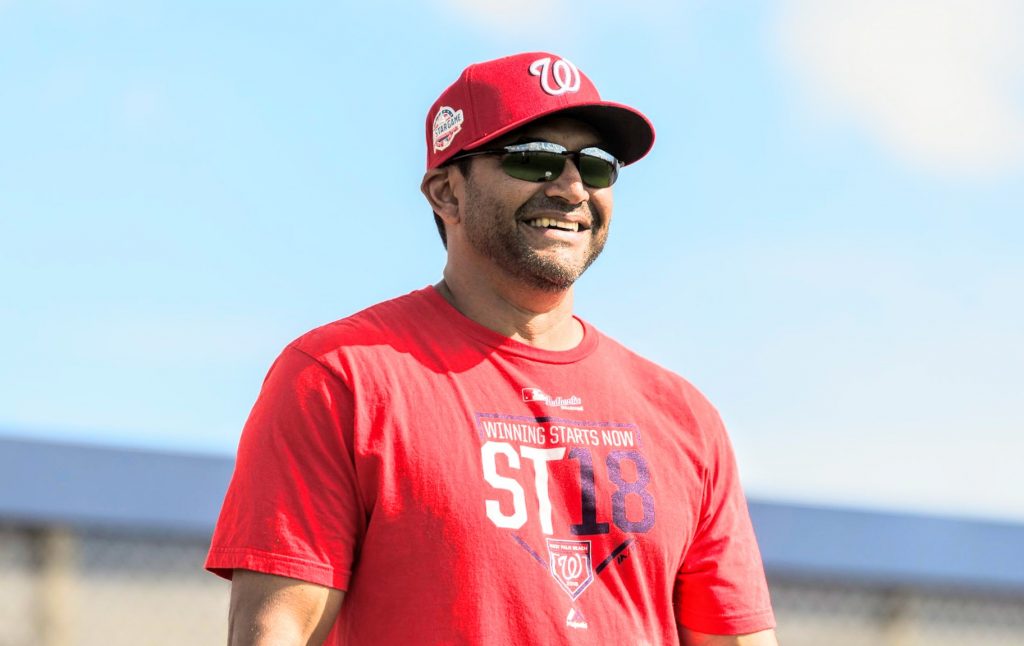 While most of the national baseball media on the east coast of Florida was  on the Houston Astros side of The Ballpark of the Palm Beaches complex that the 2017 World Series champions share with the Washington Nationals, there was plenty of action on the Nats’ side as manager Dave Martinez welcomed his new players. Of note was the apparel that Martinez chose to wear today. He was out on the field in a short-sleeved cotton t-shirt that read,  “Winning Starts Now” with the Spring Training ’18 screenprint.

Martinez had several shirts to choose from today from his closet in his office inside the TBOTPB complex. Maybe Davey was motivated by the 81°F weather after enduring freezing temperatures last week in Washington, D.C. or it could be he wanted to set the message for the players on the first day of Spring Training camp. In fairness, maybe Davey Martinez’s choice of shirts was done with no intent to send a message and had no symbolism.

Many managers around MLB have a similar shirt in their closets with corresponding team colors and logos. On the Astros’ side of TBOTPB complex, A.J. Hinch was wearing an Astros pullover. Maybe Hinch was cold while standing in the shadows where he basked in the glory of being the manager of the reigning champions and the weather motivated his choice of clothing. The Astros already won the last game they played in the post-season. The Nationals did not. Davey Martinez was clear about his expectations in so many of his off-season interviews.

“The camp is going to be loose. It’s going to be fun. We will work diligently… I grinded as a player, and I expect that from all of my players. We are going to compete — compete at the highest level every day. My expectations — and I’ve said this before — is to play the last game of the World Series and win it. We will say that message over and over again.” — Davey Martinez

Maybe Davey Martinez should have had that message printed on a t-shirt or is “Play The Last Game Of The World Series And Win It” too wordy? Some messages when they are repeated too often lose their impact. Leon Jakobovits James coined the phrase “semantic satiation” in 1962 to describe overused phrases. Others say that t-shirt messages become platitudes of words that just become overused clichés.

There are many questions that the media wants to ask. In addition, not every question can be answered on the first day of camp. All of the talk about post-season wins is fun talk. You have to win the regular season before the post-season can become a reality.

Technically, Davey Martinez has never officially won a game as a manager in the Major Leagues, however he has managed in a pinch when Joe Maddon has been ejected from games and has been by Joe Maddon’s side for 10 years in the same dugouts. Asking Davey Martinez about winning as a manager at this point in time is without an official record. The media can ask him more relevant questions after we see him at least manage some games. Even Spring Training games won’t tell us much. So yes, there are questions that cannot be asked with the proper context now. Martinez’s coaching staff were all present today and smiles were all around.

For the players, Daniel Murphy cannot tell you with certainty that his knee will be fully healed in time to play in the starting line-up for Opening Day on March 29th because he just does not know today.  Thom Loverro of 106.7 Radio said that Matt Wieters has forgiven himself for his lapses in the final game last year. Wieters has lost about 15 pounds since that Game 5 of the NLDS, but this was not weight loss due to stress rather that he consciously has worked at it to get into better shape. There is only one way to go for Wieters and that is up. He should improve and all the projection services expect him to return to positive WAR. Wieters also acknowledged that he was aware of the J.T. Realmuto rumors.

“I’ve seen it all [with the rumors], because I’ve just kept waiting to see where guys sign and who’s going to go where, and it just seems like my name’s on the docket more than anything else,” Wieters said.  “But I don’t like to take too much to where that’s my sole motivation to come here in good shape. I wanted to come here in good shape because I felt like it was something that could help my career and help this team. I’m going to do everything I can to be the best player I can and let other people decide on the moves that I don’t have control over.

Adam Eaton told Loverro that he expects to play left field and added that Michael Taylor is in the top-3 best centerfielders. You might remember that Eaton was trying to make it back for a post-season run last year after ACL knee surgery, and now we hear of caution about Eaton being ready for spring training games which are more than four months removed from when the Dodgers and Astros earned their World Series berths.

“We still have quite a bit of time until Opening Day, and that’s been our focus,” Eaton said. “Unless something unforeseen happens, I think that’s easily attainable.”

As the Nationals players arrive, they can’t miss the reminders that it is their neighbors who won every final game at each decisive step of the progression points in each series to hoist that World Series trophy.  If the Astros did not make the tough decisions in Game 7 of the American League Championship Series, it could have been the Yankees playing the Dodgers in the World Series. Most noteworthy, Dave Martinez has been to two World Series as Joe Maddon‘s bench coach dating back to 2008 with the Tampa Bay Rays. The champagne is sweeter as Martinez can tell you when it is at the World Series like he experienced in 2016 with the Cubs.

“It’s all about the win [in the post-season]. [When we played the Nationals in Game 5 of the NLDS last year], we used our closer for three innings. We’re trying to put the best players out there and win to get to the next game,” Dave Martinez said.

This entry was posted in Analysis, DaveMartinez, SpringTraining. Bookmark the permalink.
← Previous Article | Next Article →