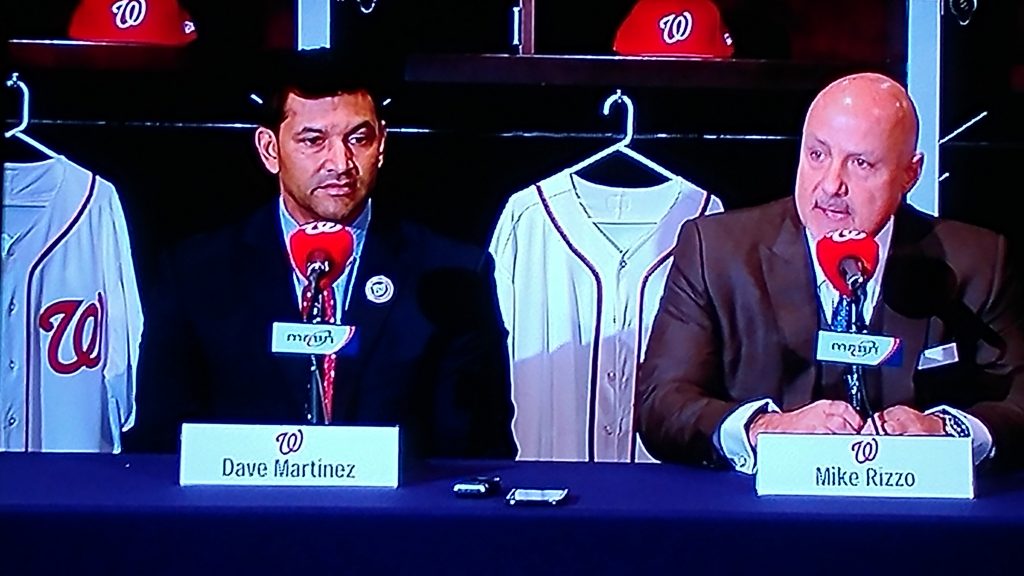 Today the Washington Nationals announced new coaching hires for their new manager Dave Martinez and filled out the rest of the key spots on the coaching staff. They made a concerted effort to hire experienced coaches with MLB resumés, and this group has a combined 41 years as MLB coaches/managers according to Chris Lingebach of 106.7 The Fan radio.

The only coach who doesn’t have prior MLB experience is Joe Dillon, however Dillon is known to many of the Nationals players from his time as hitting coach for the Nats Triple-A affiliate Syracuse Chiefs until 2015 season when he took the job of  hitting coordinator for the Marlins minor league system.

Chip Hale takes over as the bench coach for Dave Martinez and has the most extensive history on this staff in managing in the big leagues with two years at the helm of the Arizona Diamondbacks. At one time, Hale was the PCL (Pacific Coast League) manager of the year as the Diamondbacks’ Triple-A affiliate way back in 2006 when Mike Rizzo was in the front office of the Diamondbacks. Hale eventually left Arizona to take a spot on the Oakland A’s coaching staff as the bench coach under Bob Melvin. In a circuitous route, Hale returned back to the D’backs to manage them in 2015 and 2016 with little success and departed with a .457 winning percentage under a tumultuous situation with the Diamondbacks front office. Hale went back to Oakland last year as a base coach.

The other rub about Lilliquist was after his departure Cardinals GM John Mozeliak stated that he was looking for an analytics pitching coach. Was he implying Lilliquist didn’t embrace analytics? How can you knock the results Lilliquist got with two years that his staff starters with the Cardinals led the MLB in lowest ERA.

“[The new Cardinals pitching coach aka Mike Maddux] has to understand modern strategy, modern analytics, and how we can leverage that to optimize our staff,” Mozeliak said. “Clearly when you look back at the success of our pitching, it’s been good. But I felt like the process was not ideal for future growth. This is a unique spot. We have to get this right.”

Lilliquist actually faced Dave Martinez in the Major Leagues and has ownage on him. Their showdown was during a Red Sox/White Sox game on April 29th of 1995, and Lilliquist entered the game as a relief pitcher and induced a weak popup to first base to retire Martinez in their only matchup of their careers. Lilliquist was born in Winter Park, Florida where Dave Martinez attended High School so they also have similar geography in common and age as they are 2-years apart.

New first base coach Tim Bogar seems over-qualified for that job in some aspects, but it was good timing as Bogar recently became unemployed. His resumé is very extensive and is certainly the most diverse on the staff as he has managerial experience, front office experience, he played in the Majors, and he is the one coach with a clear tie to Dave Martinez as he was on the Tampa Bay coaching staff with Martinez in 2008 so they know each other.  Bogar was an interim manager for the Texas Rangers in 2014 which gives him a unique background as well as he managed in the minor leagues. Bogar spent 2015 as a special assistant to Angels’ GM Jerry Dipoto who was his teammate on the 1995–96 Mets. Dipoto then became general manager of the Seattle Mariners and they hired Bogar as Scott Servais’ bench coach where he held that position for the past two years until the Mariners replaced him with Manny Acta.

“Making change is never easy,” Mariners manager Scott Servais said. “You have relationships with those guys. The guys we let go, Tim [Bogar] and Casey [Candaele], are both very good baseball guys who I certainly respect. They’re friends of mine, but it’s a business, and we’ve got to get better.”

Rizzo said he wanted to surround Dave Martinez with experience. That's exactly what he's done. Between members of his new staff, 41 years of coaching at the Major League level (by my suspect math). pic.twitter.com/xMHUZXUr7O

The last spot Dave Martinez has to fill is a coach for his bullpen which usually goes to a former pitcher or catcher and doesn’t necessarily need Major League coaching experience. Dan Firova held the spot previously as the Nationals bullpen coach.

This entry was posted in Analysis, CoachingStaff. Bookmark the permalink.
← Previous Article | Next Article →