Will the #Nats win a prize in the right-handed reliever derby? 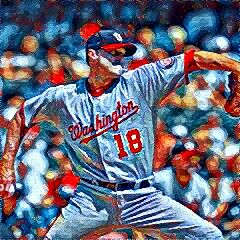 Matt Belisle had a great season with the Washington Nationals in 2016 on a cheap one-year contract. Can the Nats strike it lucky again searching for value in the bullpen?

Like the Great Molasses Flood, while Hot Stove season has been sluggish so far, the sheer concentration of baseball people at the Winter Meetings in Orlando this week is finally resulting in some movement.

In particular, right-handed relief pitchers are beginning to sign. Sidearmer Pat Neshek has returned to the Philadelphia Phillies. Fireballer Brandon Morrow has gone to the Chicago Cubs. Luke Gregerson has reunited with the St. Louis Cardinals. Bryan Shaw has reportedly inked with the Colorado Rockies. The likes of Addison Reed, Tommy Hunter, Seung-hwan Oh, Wade Davis, and former National Brandon Kintzler are also believed to be fielding considerable interest from teams.

Often in Hot Stove season, the relief market develops somewhat later than the rest. But the market began to move last week when southpaw swingman Mike Minor signed a deal with the Texas Rangers, and even though the top closers available this winter have yet to find landing spots, veteran middle relievers and setup men are coming off the board.

So far, the Washington Nationals have only signed one reliever, right-hander David Goforth, and that was to a minor league deal with an invitation to Spring Training. We’ll see whether Goforth, not particularly impressive in the Milwaukee Brewers organization, can turn himself into a viable option for the Nats in West Palm Beach. For now, he joins a list of no-sure-things that includes Austin L. Adams, Wander Suero, Trevor Gott, Shawn Kelley, Koda Glover, and A.J. Cole.

Part of the reason it seems the market is moving so quickly all of a sudden for right-handed relievers is that there are a lot of them available in free agency this winter. While this winter’s market doesn’t feature the star power of last year’s free agent relievers like Aroldis Chapman, Kenley Jansen, and Mark Melancon, it features a list of relievers who ranged from solid to brilliant this season, many of whom have the career stats to back it up.

The Nats haven’t been closely tied to anyone, but they’ve been mentioned in connection with Reed and Kintzler, as well as some others like former Cubs closer Hector Rondon, veteran setup man Sergio Romo, and ex-Nat Matt Albers.

Will they come away from the Winter Meetings with one or two more names in their major league bullpen mix? Or will they continue to wait out a market that may be getting too hot?

One more possibility: The Nats could eschew top free agent relievers altogether in favor of a Moneyball approach. Who might be next season’s version of Albers or 2016 find-of-the-year Matt Belisle, who turned in sub-2.00 ERA seasons after originally signing minor league contracts with Washington?

This entry was posted in Analysis, Bullpen. Bookmark the permalink.
← Previous Article | Next Article →