Thanks for Thanksgiving for our Washington Nationals!

Posted on November 22, 2017 by ArVaFan aka Laura Peebles 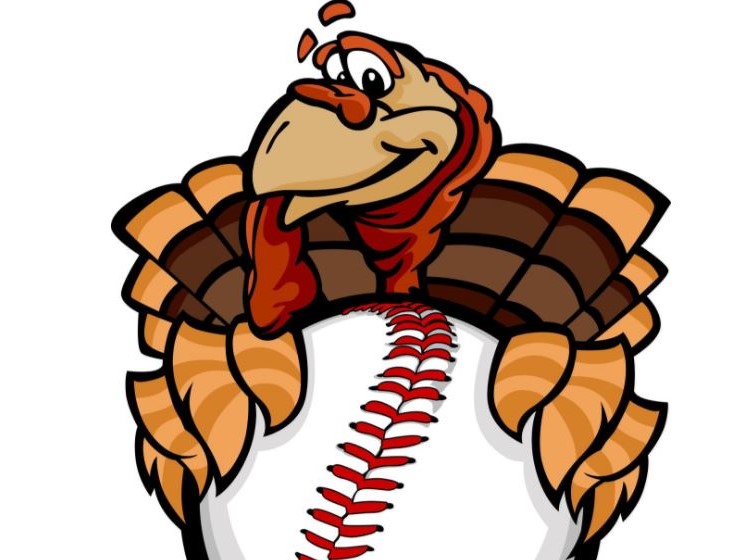 What the Nationals and their fans have to be thankful for:

Max Scherzer:  Family.  Despite what we hear on this blog and elsewhere, there are things more important than baseball.

Stephen Strasburg:  the miracle of modern antibiotics.  And rain.

Joe Ross:  that the percentage of pitchers who return to form after TJ surgery is increasing every year.

José Lobaton:  that his helmet-taking-off skills are so good that he appears in many Nats’ highlight reels. Because that’s the only way he gets there.

Michael A. Taylor:  that he got a third chance, and thanks to Dusty’s coaching, was able to seize the opportunity.

Tony Rendon:  That he finally got a well-deserved award whether he wanted it or not (okay, not MVP, but “best performance” will have to do).

Jayson Werth:  that someone invented gluten free beer so he could drown his sorrows.

Victor Robles:  that Pedro Strop didn’t have a chance to pitch to him.

Adam Eaton:  Miracle of modern medicine. And that he has a really cute kid who already knows that he has to run out a grounder.

Ryan Zimmerman:  that Mike Rizzo and Dusty believed in him when pretty much no one else did. Also Mike Rizzo easily won the bet with Tom Boswell on Zim’s production.

Bryce Harper:  that home run in Game 2.  Because whatever else happened or didn’t after the DL stint, that HR was pure Harper, and said “I’m still here, and still Bryce.”  And Michael Morse—because if Samardzija had connected, it might have been Bryce on the DL with a career-ending concussion.

Daniel Murphy:  I’m sure he has a lot to be thankful for—but we can be thankful that we get to watch someone who loves his job and does it so well.

Wilmer Difo:  that he had a chance to prove that he belonged in the Bigs with regular playing time.

Grant Green:  that unlike 99.8% of the people reading this, he has a Baseball Reference page with major league service time.

Pedro Severino:  that he didn’t hurt himself, or the Nationals, during his brief appearance.

Raudy Read:  that he didn’t hurt himself, or the Nationals, or his chances, during his brief appearance.

Sean Doolittle:  that the Nats fans embraced the Doooooooooo, even though it’s a lot like the former Druuuuuuuuuuu.

Matt Albers:  that whatever else happens in his career, or his life, he’ll have 2017 to look back on with pride.

Ryan Madson:  that Rizzo has a great working relationship with the A’s.

Blake Trienen:  that Rizzo has a great working relationship with the A’s.

Koda Glover:  that between DL stints, he was able to show his potential.

Sammy Solis:  that Dusty gave him so many chances this year.

Adrián Sánchez:  that the opportunity finally came, and he was able to make the most of it.

Andrew Stevenson: that whatever else happens (or doesn’t) in his career, he’ll always have that game-saving catch on highlight reels.

Mike Rizzo: That he has a great working relationship with the A’s. And that his contract didn’t end over the “keep or replace Dusty” dispute.

Me:  That Steve keeps this blog going so we have a place to celebrate, commiserate, speculate, and do all the other things that fans do in all four seasons:  Hot Stove, Spring Training, Regular Season and Postseason (what‽ those aren’t the ones on your calendar?).

This entry was posted in Awards. Bookmark the permalink.
← Previous Article | Next Article →