The 2018 #Nats roster and the free agents, options, and salary projections

“One thing I’d like to read would be your expanded take on possible off-season moves for FA and players with options. Particularly Lind, Kintzler and Howie. The team was so strong most of this 2017 season, especially after Rizzo built the bullpen up with KMD.” — NavyYardNats 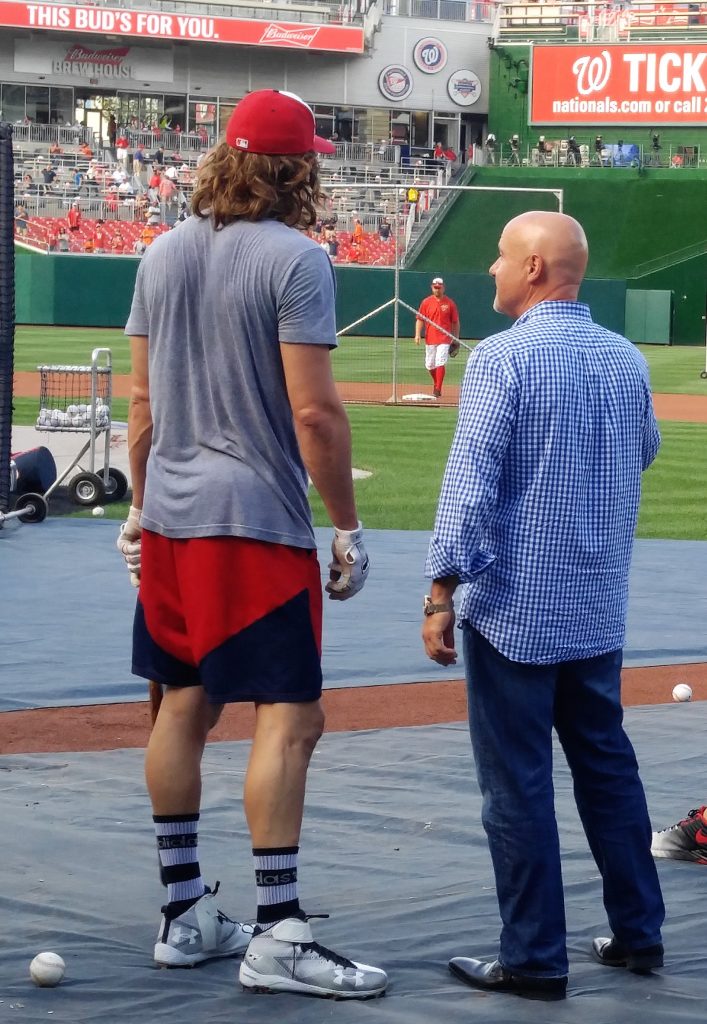 That was a great suggestion from NavyYardNats for an off-season analysis.  Here is a look at player statuses with projected 2018 salaries (below) using MLBTR estimates for arbitration-eligible players.

You will note we have input Matt Wieters in the projections as he will almost certainly take his player option, and Nationals fans can hope he chooses free agency which seems very unlikely. There is a mutual option for Adam Lind meaning both the team and player have to pick up his $5 million option, and you can expect the Nationals will want him back however common sense says Adam Lind will want to test free agency after having a very good season and seek a multi-year contract.

There are players who the Nationals will be interested in bringing back like Lind which will be a long-shot on the mutual option. Matt Albers who was excellent this season and would be due a sizeable raise is set to be a free agent and still would fit well. On the other hand, Brandon Kintzler becomes a free agent for the first time, and he will be looking to cash-in on his All-Star season and would require a multi-year deal and the Nationals continue to be a match with him also. The situation is more complicated with Adam Lind, Jayson Werth and Howie Kendrick.

By our projections, the Nationals are already looking at $173 million for their 2018 payroll (cash basis not tax basis) if they retained both Lind and Wieters, and before any trades or free agent acquisitions. Even if Lind does not return, his salary would most likely be replaced with another back-up first baseman at a similar compensation level.

While the Nationals reduced payroll with Jayson Werth coming off of the books, they had many raises due to players eligible for arbitration and 2018 contract increases. Bryce Harper will earn over $21 million which is the highest amount of any player aged 25 or younger and by the way, Happy 25th birthday to Bryce Harper.

“Though Jayson Werth is 38 years of age and has dealt with injuries in recent years, the well-respected veteran doesn’t appear to have any inclination to call it a career after his seven-year, $126MM contract with the Nationals expires this season. Per Jon Heyman, Werth has stated that he’d like to play another three or four years, at the least, before retiring from the game. Werth struggled in his return from a left foot injury this season but had hit .262/.367/.446 with eight homers, five doubles, a triple and four steals through 196 plate appearances before landing on the shelf in early June.”

The Nationals wish list most likely includes acquiring one veteran starting pitcher. Lance Lynn would be a great fit on this Nationals team if he is not given a Qualified Offer. He is valued at $16 million a year but could cost more than that.  For the Nats bullpen, they need a healthy Koda Glover back and could use Matt Albers who was a perfect fit in 2017. Mike Rizzo could also be in search of a 5th outfielder who is right-handed, and you never know if they will go after Howie Kendrick or Jayson Werth. The unknown of course is whether Adam Lind returns which is doubtful on the mutual option, and he fits perfectly on this 2018 team which could happen in free agency. The last need would be an upgrade for the back-up catcher who the Nats could acquire via trade or free agency and as we have pointed to for months is J.T. Realmuto as a perfect fit if a trade could be worked out with the Marlins who are looking to slash payroll.

Now for the jolt of reality — Major League Baseball does not have a salary cap rather they have their own version of a luxury tax called the “competitive balance tax” with deep penalties for team’s that exceed the “cap”. The “cash” payroll is very different from the “tax” payroll. The cap is based on the average annual value (AAV) of all contracts to properly account for salary deferrals as well as upfront lump-sum payments and not the actual annual player paycheck plus you add player benefits and bonuses plus all 40-man salaries that the big league club must pay for. The add-on to the AAV salaries will add approximately $16 million additional.

That AAV as computed by Cot’s Baseball has factored into Scherzer’s contract ($28.69 million) plus Strasburg’s $7 million differential and Zimmerman’s $2 million as well as a $5 million deduction for Murphy which adds up to $10.5 million that must be added to the actual payroll. The 2018 tax begins at a dollar over $197 million. The Nats appear to have exceeded the 2017 competitive balance tax for the first-time depending on the math —and— it will be close. If they in fact exceed the cap,  there is a first-timer’s 20% penalty. And since it will be close again for 2018, the Washington Nationals could easily exceed it which would have a 30% penalty for a second consecutive season. This is all speculation and we await a final accounting.

We never know what Mike Rizzo can spend in any given season, and we also have no clue when the MASN lawsuit will be settled. The good news is the team was willing to spend big bucks last year after the trade deadline. The Nationals will most likely be in the top 5 of payroll spenders in 2018 and could be top 4 if the Blue Jays cut payroll as teams like the Tigers and Giants fall behind the Nats in spending. We also do not know what the Yankees will do with their expiring veteran contracts as well as the creative Dodgers.

Here is what the Nationals 2018 roster would look like today:

The Nationals have 20 of the 25 opening day 2018 spots already penciled in. Much can change over the next 5 months as we know. There is certainly room to look at bringing back Albers, Kintzler, Lind, Kendrick, and Werth. In order for players to return who are no longer under team control, it goes back to “it takes two to tango”. There has to be a willingness on both sides to start with — and a fit. The Nationals best fit is for Adam Lind as that spot is wide open, but it is a bench spot and Lind could most likely find a starter’s spot on a multi-year deal.

Would Mike Rizzo surprise us and find a way to acquire Marlins catcher J.T. Realmuto? Could Mike Rizzo find a way to sign Lance Lynn or another high profile free agent? Most likely Lynn will receive a qualified offer making him less attractive because the Nationals would lose draft picks. There will be other names that will emerge. Realmuto has not been mentioned as a trade candidate, but Mike Rizzo should check in on him as he is a game changer.

We will most likely revisit these subjects dozens of times this year and through the Hot Stove period and into Spring Training and into the final days until the Opening Day 2018 roster is set!