Game #156 is all about Bryce Harper returning (sometime this week) 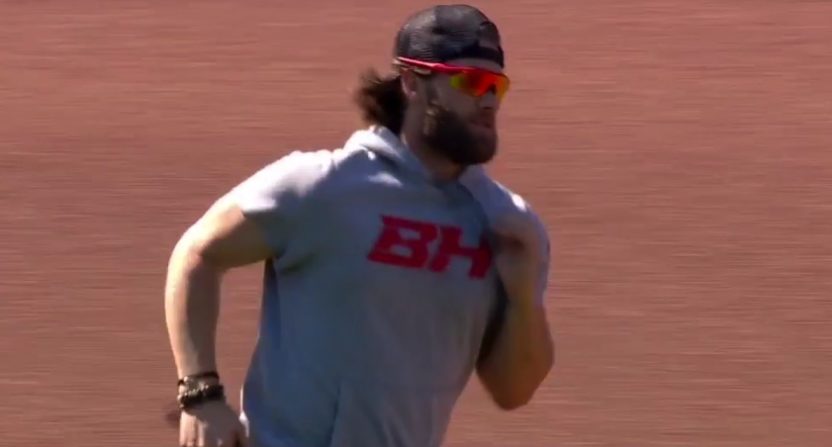 On the early evening of August 12th, the rain was falling hard in Southeast Washington, D.C. at the scheduled start time of 7:05 pm for the Nationals and Giants game after a rainout the night before. Rain had turned to a drizzle and misting when play began after 10 p.m. — totaling almost a 3 hour weather delay. The Washington Nationals were already banged up, and the line-up that evening resembled a split-squad line-up with Brian Goodwin leading-off, Wilmer Difo playing shortstop and batting second, Adam Lind getting “reps” in leftfield batting seventh, and Edwin Jackson as the starting pitcher trying to resurrect his career — again. Only this was not a split-squad game as the facts were that Trea Turner, Jayson Werth, and Adam Eaton were all on the disabled list. It was so bizarre that Adam Eaton’s replacement, Michael Taylor, was also on the disabled list at the time.

What happened in the bottom of that first inning stunned the baseball and sport’s world when Bryce Harper had a slip and fall making contact with first-base as his knee awkwardly contorted and he tumbled to the ground writhing in pain that caused a reaction from Dusty Baker that looked like shock and grief all rolled into one. There was indignation at the design of the base — exasperation at Major League Baseball as they had the full authority on that day to cancel the game or “play ball” in the inclement weather. There seemed to be a foregone conclusion from many that Bryce Harper’s season and the Nats chance at the post-season would be over in that instant as tweets, texts, blog comments, breaking news on sports shows were all showing video footage of the accident and fearing the worst. When the going gets tough, some turn to negativity and self-loathing. Fortunately, there were a few positive thinkers who emerged with an alternate ending to that horrifying video that the injury could just be a hyper-extension and a bone bruise.

We all saw that Harper was carried off of the field, but after the game there was some optimism among the thorns as news spread that Bryce had actually walked with a slight limp to his car after the game. How could that be? It sounded like a miracle. The next morning there was an 11 AM press conference with Washington Nationals general manager, Mike Rizzo, and there were no leaks beforehand as to Bryce Harper‘s condition. Mike Rizzo delivered some very encouraging news on Bryce Harper that there was no ligament, tendon or structural damage to Bryce Harper’s leg. The official diagnosis was a “knee hyper-extension” with a severe bone bruise, and they didn’t mention the calf strain but that may have not been known at the time.

“There is no ligament or tendon damage, which is pretty remarkable in my mind, seeing the type of injury [Bryce Harper] had,” Mike Rizzo said. “There is a significant bone bruise when he hyperxtended the knee. We felt we dodged a bullet with no long-term ligament and tendon damage.”

“The bone bruise is something of significance. We’re going to treat him cautiously. We’re optimistic that he should be back by the end of the year. We have no timeline. We’ll treat it day to day, treat it cautiously and will continue down that road.”

“It’s on my timetable,” Bryce Harper said to the media later in the day after Mike Rizzo had delivered the encouraging news. “It’s whatever I feel. We’re not going to rush or anything like that. So if I feel good, I’m going to play. If I don’t feel good, I’m not going to go out there and play.”

Mike Rizzo and Dusty Baker would not give a timetable even this past week for Bryce Harper’s return — and now, here we are fast-forwarding to 44 days into the future from when the injury happened.

The Nationals “held serve” and then some while Harper was on the DL. The team actually went an impressive 25-and-16 during that timeframe doing slightly better in the winning percentage then prior to Harper’s DL stint, but the Nats did not do it with an improved offense — they did it with better pitching, particularly in the bullpen, and winning a slew of one run games going 12-and-6 in those games in the 9th inning when one run was the difference.  Even with the Nationals getting back Trea Turner, Werth, and Taylor after the Harper injury, the Nationals saw a noticeable drop in runs scored by almost 20%.

Some of that drop in offensive run production could be attributed to the competition faced like the Astros, Angels, Brewers, and Dodgers in playoff-style baseball and part of it could have been the “dogs days” of August and much of the rest chalked up to not having those 23 run games and actually the Nats haven’t scored more than 11 runs in a game since Harper went on the DL which they did 10 times before Harper was injured. Those games certainly skew the numbers, but it also got us looking at the highest period of production which was when Adam Eaton was in the line-up and the “band” was together scoring 6.26 runs per game with Eaton and only 4.89 runs after he went on the DL. The conclusion — this team can really score runs with Eaton, Turner, Harper, Zimmerman, Murphy, Rendon and a productive catcher and leftfielder. The one “band” member who won’t be back any time soon is Adam Eaton and the Nationals are still hoping for Matt Wieters to turn back to his April form along with some improved play from Werth and Taylor.

What we don’t know is what to expect from Bryce Harper in terms of his performance on the field, and we expect that he will be very conservative during this final week of the season. These next few days are like a condensed Spring Training before the real season begins on October 6th.

“That’s somebody that’s super special [to have in our line-up],” a Nationals player said about his teammate. “We know what we’ve got in him. Having him at the top of the lineup, there’s nobody like him. It’s a lot of fun to be a part of, a lot of fun to watch. He’s going to grow and grow into a greater ballplayer than he already is.”

That’s a great quote, but it was actually said about Trea Turner from Bryce Harper a year ago. The same can be said about Harper today. He’s a difference-maker and still only 24-years-old. Greatness indeed.

“Having the lineup being left-right-left again like we were doing earlier in the year,” Ryan Zimmerman said on Harper’s return. “Just his presence in the lineup, the depth it creates, it gives the other team another big person to worry about. It definitely makes us better.” You’re just so happy to have a chance to get back and contribute, that kind of takes over. Just having his presence in the lineup is huge. But he’s also one of those guys where you wouldn’t be surprised if, when he comes back, he goes crazy.”

Aside from the line-up construction and righty-lefty-righty- etc., today’s test in the final 7 games of the season begins in Philadelphia tonight. These teams know each other very well even though both squads have some new exciting prospects on their current roster like Rhys Hoskins for the Phillies and Victor Robles for the Nationals.

The pitchers feature the Phillies top-of-the-rotation righty starter Aaron Nola against Nationals spot-starter A.J. Cole. What’s interesting having Cole in the line-up at his point in the final week of the regular season is the Nationals rest schedules and seeding for the NLDS rotation.