At the end of the 7th 18-game set, the Nats were 26 games over .500 and stood atop the NL East by 12 1/2 games. The division title seemed assured: the question was not if, but when. But few thought the big moment would occur in the next 18 games. After all, the magic number at that point was 24, and the Marlins had won 7 of their last 10 games.  Was it possible that the next 18-gamer would include this?

Well, yes.  (Sorry to spoil the suspense if you’ve been living on Mars for the last week.)

You will recall that some surprisingly good starting pitching led the team to a 12-6 record in the previous 18-game set.  This time the starting pitching had much less to do with team’s success. Let’s take a look at how it stacked up against previous sets. 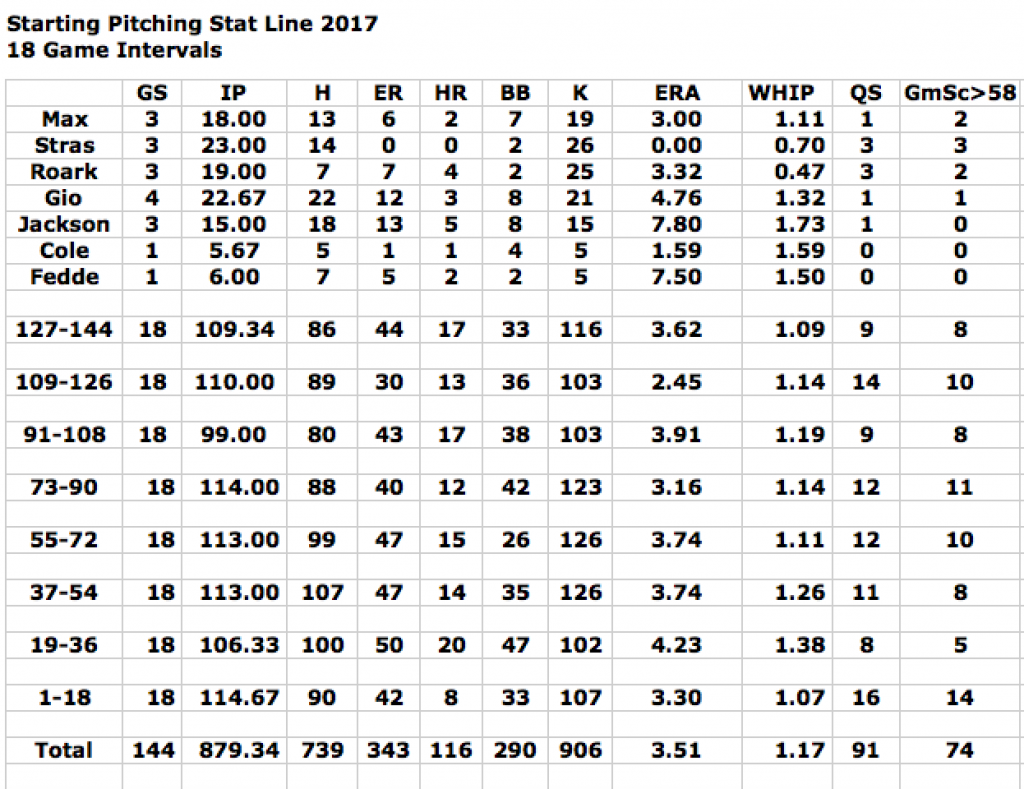 Stras was on fire and Tanner very good, but otherwise the starters were inconsistent to say the least.  Only nine quality starts compared to 14 in the previous set, yet we managed to go 12-6 just the same.

I count five wins when the starter’s Game Score was 55 or lower.  So with the starting pitching serviceable at best, it was up to the hitters and bullpen to step up.  Both definitely did.  Here’s a hitting comparison of the last two sets:

Only one more home run in the set and the same number of men left on base, but 19 more runs, 23 more hits, and an OPS 82 points higher.  Apparently, averaging 4.9 runs per game instead of 3.9 runs per game gives you a fighting chance of having the same record, even with markedly worse starting pitching.  Oh, and 20 fewer Ks probably helped.  Here’s the batting summary for these 18 games:

The set began with the Nats taking two of the remaining three games to split a four game series with the Mets.  Robert Gsellman, old friend Tommy Milone, and Seth Lugo were definitely not Jacob DeGrom, who had beaten the Nats in the first game of the series.  In the first game of this set, a 9-4 Nats victory, MAT seemed to be auditioning for their rotation.  97.5 mph?  Really?

Sanchez had a big day with two RBI singles, including one of the most inspiring knocks of the season after being hit by a pitch in the chest on a missed bunt attempt. The video at this link has the entire sequence, with Charlie and Dave’s radio call.  Skip past about 3/4 of it for the hit and the crowd’s ovation. Pretty cool.

The next day, for third time in a month and the fourth time this season, the Nats split a doubleheader by winning the nightcap after dropping the first game.  Then it was on to Miami for the first of two series with the Marlins that would put a stake through the heart of the Marlins’ hopes for the postseason.

In the first game, Jayson Werth celebrated his return after 75 games on the DL with a broken toe.

Enjoy that one because JW would hit just .042 in the remainder of the set.  Max’s 7-inning, 1 run, 10 K outing was a relief after he had missed two starts.  What he does when he’s right is pretty darn impressive. Truly one of the best in the game.

Max Scherzer had 10 strikeouts tonight- has nearly avg'd 1 such game per every 2 starts since joining the @Nationals (now tied for 7th here) pic.twitter.com/ohc8dv2RiD

The next night marked Trea Turner’s return from the DL after missing 51 games with a broken wrist.  Though his debut was not as auspicious as JW’s, he had a double and scored a run.   And he would make significant contributions in the rest of the set as we will see.  E-Jax was on, after giving up the obligatory early game homer to Giancarlo Stanton, and TTB broke the game open with this well-timed, well-placed bases clearing double.

The next night we saw a gem from Stras, who has quietly put together a stretch of excellence rarely seen in baseball.  His 6 hit, one BB, 8 K  complete game shutout on just 110 pitches was a thing of beauty.  Oh, and he also scored the winning run with a homer.

As we’ll see he was only getting started, as were the Nats when it came to putting the Fish in their place.

The Nats then jetted off to Milwaukee for Labor Day weekend, where they ran into some starting pitching from Zach Davies and Jimmy Nelson that they just couldn’t solve.  The bats pretty much went to sleep, scoring just eight runs in the four games, of which we lost three.

The winning run in the only victory came on a TTO RBI-double, but it was the speed he flashed repeatedly in the first game of the series, a 6-3 loss, that probably warmed the hearts of Nats fans the most.  Check out this highlight reel.

TTO seems to be ready to be that ODM (October Difference Maker) that we very much want to see.  His statline in the 14 games he played in this set after returning from the 51 game layoff was very encouraging.  Would we take 24 bombs, 47 steals, and a .952 OPS over 162 games?  Um, yeah, I think so.

A bit deflated after their disappointing weekend in Brew Town, the Nats headed to Miami to complete their destruction of the Marlins.  Daniel “Hits” Murphy led the way in the first game with a homer and an RBI-double.   I couldn’t find a video of just those hits so you’ll have to also endure a 2-run blast by TTB, and a nice catch for the final out by Alejandro De Aza (in as a defensive replacement!), robbing old friend T-Mo.

Murph had a fantastic set, his best since early in the season.  Take a look.

Sometimes he’s so consistent, you forget how great a year he’s having.

In the next game, Stras pitched six shutout innings with 8 Ks, but had to leave with a cramp in his calf.  Solis, Albers, and The Doctor finished off the tense, hard fought game, which the Nats won 2-1.  And in the final game, Gio didn’t give up a run, but he made 100 pitches in 5 innings. So he gave way to four relievers from the B bullpen, who held the line giving up only one hit in the last four innings.  Meanwhile, the offense, led by Ryan Zimmerman, piled on with some monster home runs.  Check out TTO’s great diving catch too.

A sweep at home is one thing, but a sweep on the road is punishing and that last game was an exclamation point.  The Nats won the season series with the Marlins 13-6, scoring 99 runs to the Marlins’ 58.  And the huge reduction in the magic number from those six head to head games really set the stage for the early clinch.  Remember the days when the Fish had our number?  No longer.

Recalling Zim’s big day is a good time to highlight his excellent 18 game set, after a long slide from his amazing start.  Could he be getting back to “comeback player of the year” form just in time for the playoffs?  We sure hope so.

The Nats returned home for a four game weekend series against the Phillies, and they took care of business, winning three of four. The first game was a textbook second half of the season 4-3 Nats win — a quality start from Tanner, a late inning, go ahead 2-run single from TTO, and shutdown work from The Firm.

Speaking of The Firm, the three-headed monster plus junior partner Matt Albers did a spectacular job in this set. In a total of 26 appearances and 22 1/3 innings pitched, the four of them gave up just 3 runs for a 2.02 ERA and a 0.94 WHIP. That’s the nucleus of a very scary bullpen for the playoffs.

The second game was very different –not textbook at all.  Max was not sharp, giving up 4 runs in 6 innings, including a 3-run homer in the first inning.  Ollie and Kelley also gave up a 3-run jacks, but somehow the Nats managed to out slug the Phillies.  They won 11-10, mostly because of this guy.

All told, he went 4-5, with an inside the park grand slam, an RBI triple for what turned out to be the game-winning run, and yet another fantastic outfield assist.  Have a night, MAT!  TTO also hit a home run, and The Doctor, who came in in the 9th to bail out Kelley, struck out the side for the save, his 5th of the set in 5 tries and 17th since becoming a Nat.  He hasn’t been perfect, but he has yet to blow a save in a Nats uniform.

In the final game of the Phillies series, Dusty started a lineup featuring Difo, Sanchez, Robles, Bautista, Stevenson, Lind, and Severino. That’s seven players who did not start on Opening Day, and four who weren’t even on the 25 man roster.  Stras pitched his best game of the season in a 3-2 win — 8 shutout innings, 2 hits, 1 BB, and 10 Ks in a game that lasted just 2 hours and 16 minutes.

The national press is starting to take notice, as it should.

The game also featured Ryan Madson’s first save as a Nat, albeit a shaky one,  a solo homer from TTO, which turned out to be the game winner, and Victor Robles’s first hit and RBI.

And so all that was left before the champagne bottles could be popped was for the Braves to walk off the Marlins about an hour and a half after the final out of the Nats’ game.  The celebration was epic, in the clubhouse, on the field, and in the stands for the hearty souls who stuck around.  Enjoy a two minute recap, and let’s hope for several more of these before the long, cold, baseball-less winter.