You may recall that the 6th 18-gamer was essentially the Bryce Harper show.  With six homers, five in the first inning, Bryce led the way to a 10-8 set with a lot of help from the revamped bullpen. (By the way, all the videos have been fixed in that post if you had trouble viewing them before.)

So it’s not surprising that Natstown did a collective “Oh Sh$&” when Bryce slipped on the first base bag trying beat out an infield single in his first at-bat of a rained delayed Game No. 114.

Some predicted the worst for the team.

Bryce Harper's had 2 other lengthy injury absences and as this shows, the #Nats have been pedestrian without him at 1 game over .500 (45-44) pic.twitter.com/RcXMo3RZs9

How’d they do it?  Well, as usual in baseball there are many answers to that question, but it’s fair to say even though there were quite a few key hits delivered by not the usual suspects, it wasn’t the hitting that carried the team through this potentially catastrophic period.

The Nats had 16 fewer homeruns and a team OPS that was 91 points lower than in the previous 18 games, when they won only 10 times.  Check out the game by game summary and note that in 13 games in the set, including the last 10, the Nats managed less than 10 hits, and yet they won eight of the 13.   In comparison, in the last 18 gamer, they had only 10 games with less than 10 hits, and lost all but four.

That’s a lot of wins in games where the bats were hardly on fire.  So pitching was the key, as it has been so many times this season, but there were several unexpected heroes, particularly among the starters. Here’s the summary.

You may have noticed that the names Scherzer and Strasburg once again made limited appearances in the pitching summary.  Two each in fact.  Yet the starters had one of their best overall showings of the year. Check this out: 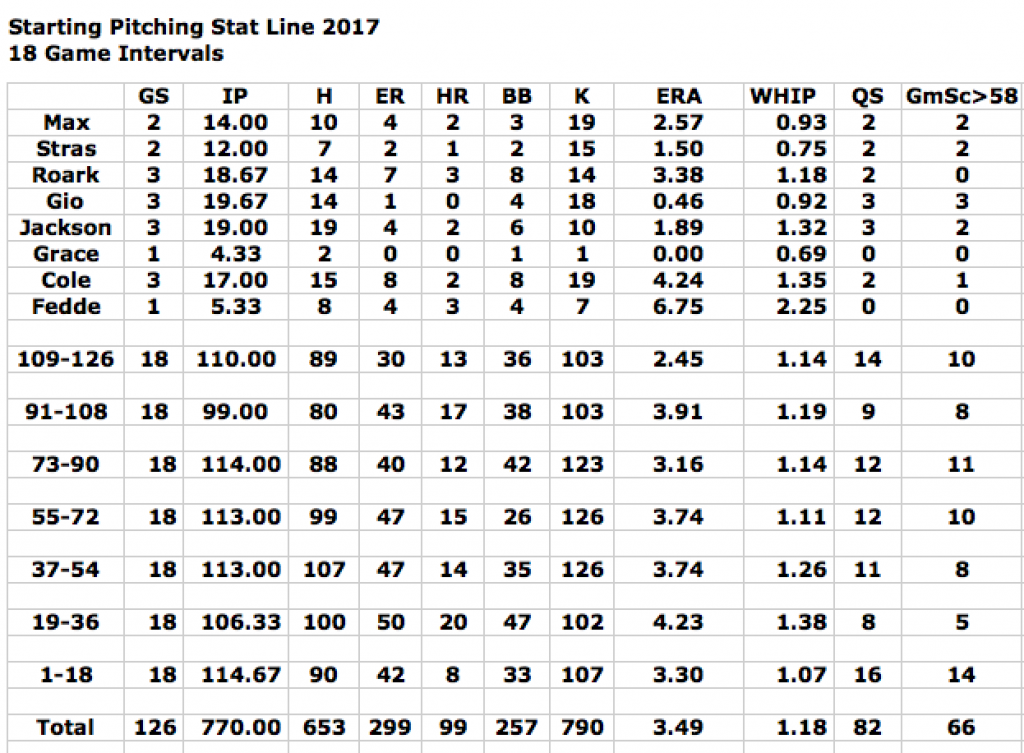 Using eight different starters, the Nats rotation had its best ERA over 18 games by far, along with an excellent WHIP, and more quality starts than in any set other than the first one.  It was an amazing showing by a starting rotation under a lot of stress, with Gio, once again, leading the way. Look at the numbers in the three games he pitched.  Stunning.

With that overview, let’s take a look back at the games themselves.  The set started with the Nats winning the rubber game of the series at Wrigley Field, assuring home field advantage over the Cubs in the playoffs if the two teams have the same regular season record.  Dusty called on The Firm even though the Nats were down 4-3 going into the 8th inning.  He was rewarded with a  grand slam by Matt Wieters, the first of our unexpected heroes.   Good stuff in any language.

The Firm, plus Ollie, threw 3 2/3 innings of scoreless relief, a sign of good things to come in the set.

Kintzler got the win in that game, and he got his second win in as many games the next night when the Nats returned home to face the Marlins.  Bryce hit his 29th homer of the season, and 150th of his career.  (Unfortunately, it was his last that you’ll see in this recap.) But the big blow was struck by another unexpected hero — Adam Lind, once again coming through as a pinch hitter.

The next night the Nats couldn’t solve Vance “CY” Worley for the second time in less than a week.  But they won the next two games, the first a 10-1 laugher behind Gio, and the second a tense 3-2 comeback win, with Brian Goodwin hitting a home run to put the Nats ahead in the 8th, and defensive replacement Andrew Stevenson saving the save for Dooo and the game for the Nats on a diving catch in left field.  That’s two more unexpected heroes in one of the most exciting games of the season.

Next the Giants came to town for a rain soaked weekend, with the new Skittles tarp getting plenty of action. 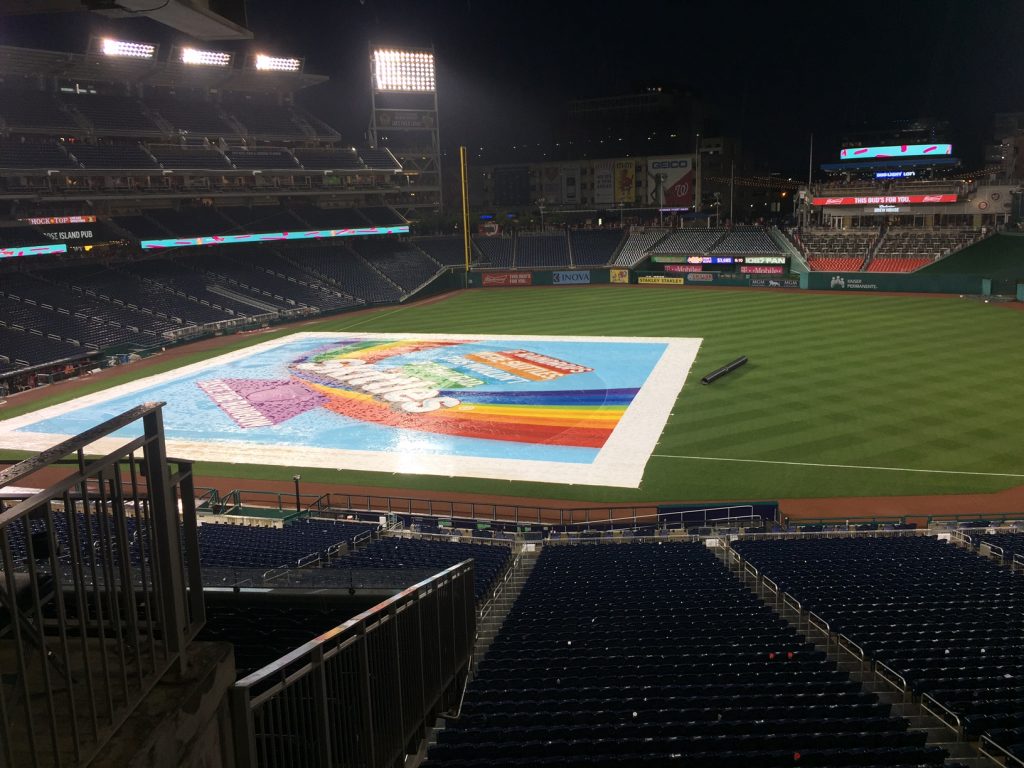 Friday night was a washout, and Saturday’s game was delayed for three hours before finally getting underway.  Unfortunately, the first base bag was still slippery and in the bottom of the first inning, Bryce sustained his scary injury.  The 18-game set was over for him after only 6 games.  He was having a pretty good one so far, and we’ll just have to hope he can add to his fantastic numbers before the season comes to an end.  For the record —

Behind E-Jax, the Nats took that first game of the series, with The Firm giving up just two hits in 3 innings.  That outing would turn out to the best last time we’d see Ryan Madson pitch in this set, as he soon would head to the DL with a sprained finger.

Then the teams were back on the field just a little over 12 hours later to play a double-header to make up Friday’s rainout.  But even before the first game got underway, Mike Rizzo announced that Bryce’s knee injury was less severe than most expected.  This article nicely captures the drama of that announcement, and Bryce’s importance to the team, and the sport.

After all that, the first game of the doubleheader, a 4-2 loss, was kind of an afterthought. But the nightcap gave us a memorable ending from another unexpected hero — Howie Kendrick.  This “in the moment” video by Andrew Lang, including Mike Rizzo’s celebration with his team in the Lerners’ suite, is worth a look if you haven’t watched it yet:

Rizzo has every right to be proud of his handiwork. #ThisIsHowieDoIt had quite a set, starting 12 of the games, and playing in 16, with four homeruns and an .872 OPS.  Wowie!

After that excitement, the Angels and Mike Trout came to town for the second half of a home and home series between the teams this year.  As they did in Anaheim back in July, the teams split the two games.  In the Nats win, Gio pitched six innings of shutout baseball, allowing just two hits, and The (reconfigured) Firm of Albers, Kintzler, and Doolittle finished off a 3-2 win, though Kintzler finally gave up a run in his eighth appearance since joining the team.  The key blows were two homers by Howie against his former team– numbers 100 and 101 of his career. Watch for two appearances of Draz’s son in the video.

I’m proud of the composition of this pic I took that night of Zim chatting it up with the best player in baseball, framed by Gio and a beer guy, so I’m putting it here. Poster’s prerogative. 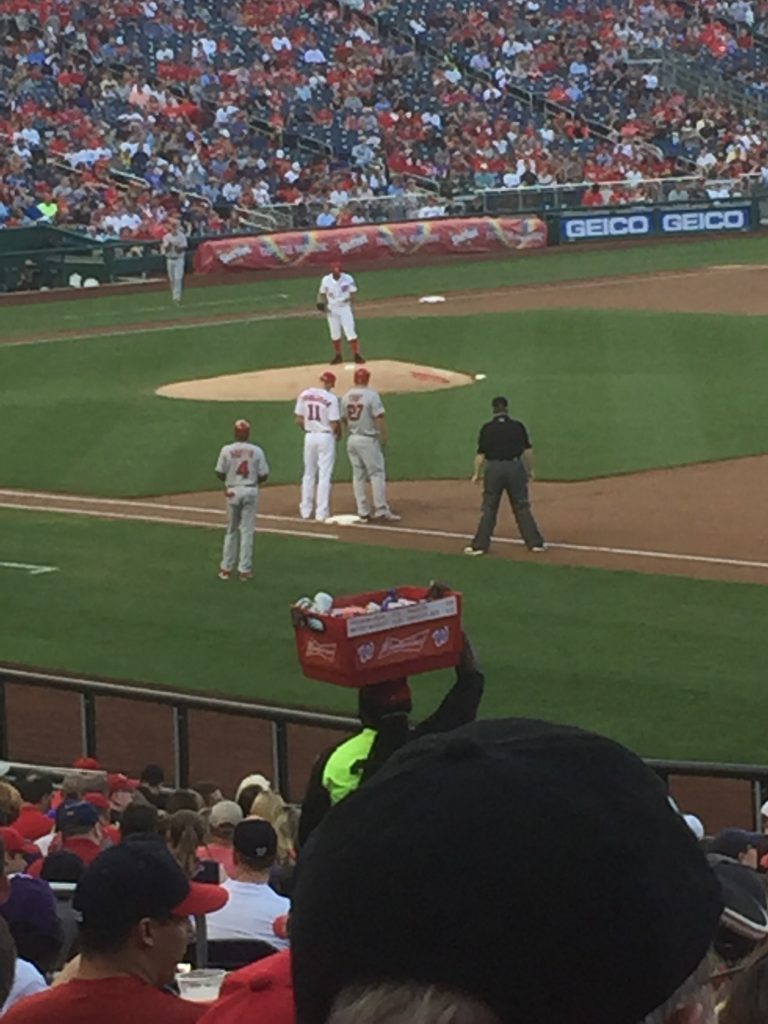 After the mini-series with the Angels, the Nats headed west to play one of the worst teams in baseball, the Padres, before facing one of the best, the Astros.  Winning both series, they completed another very successful road trip with a record of 5-2.

In the first game against the Padres, E-Jax pitched a strong seven innings and Ryan Zimmerman got him the 2-1 win with a homer in the 8th.  Zim didn’t have a great set, which is one of the reasons all the unexpected heroes were so welcome, but he did come through in the clutch several times.  Here’s how his overall set looked — an uptick from the last one with, once again, five homeruns, and, encouragingly, nine walks compared to just two in the previous 18 games.

The next game featured a truly unexpected hero when Max was scratched as the starting pitcher only a few hours before game time.  A real live “bullpen game” ensued, and the surprise starter was a guy whose ability to pitch multiple innings had been forcefully questioned on this very blog just a few weeks ago.  But Matt Grace proved equal to the task, hurling 4 1/3 scoreless innings while giving up just two hits and one walk.  Dusty had nice things to say about “Gracey” in this clip, which also shows some defensive highlights, including a sensational, home run robbing catch by Michael A. Taylor.  MAT was rushed back to DC after Bryce’s injury and although he has taken a while to get his hitting stroke back, his defense shined right away.

The next night was notable mostly for Stephen Strasburg returning to action before his hometown crowd.  Stras gave up a first inning two-run homer, which eventually was the difference in the game, but allowed only four hits and one walk in 6 innings. Mission accomplished there, despite the 3-1 loss.

In the final game, Gio tossed a 6 2/3 inning gem, allowing only five hits and one run, striking out eight and walking only one batter.  The offense was led by Daniel Murphy, who drove in two of the Nats  runs in the 4-2 victory, and scored one.

You may have noticed that Murph hasn’t figured prominently in this recap.  That’s because he had by far his worst set of the season so far, with an OPS of just .585.

Murph has been definitely been dragging and one can only hope with Howie on board and Difo freed up to play second when Trea Turner returns, that he gets alot of days off in September.

The series in Houston, between the two teams that shared a spring training facility in West Palm Beach back in February and March, was significant.  Both teams were missing some of their most important players, but should they finish with identical records (and they were tied before the games last night) and meet in the World Series, the winner of this series would get home field advantage.

In the first game, the Nats took a 4-3 lead in the top of the 4th inning on a Wieters home run.  Tanner Roark only went 5 2/3 innings before being pulled after making 115 pitches, and it fell to the bullpen to get through the final 3 1/3 innings.  They did just that, with Ollie, Blanton, Kintzler and Doolittle bringing home the win.

Doolittle, by the way, had an outstanding set. He appeared in 10 of the 18 games and had an ERA of 0.90 and a WHIP of 0.70, while converting all seven of his save opportunities.  And that to the five saves he had in the previous set, and, well, the Nats twitter account does the math.

Since joining the #Nats, Sean Doolittle is 12-for-12 in save opportunities.

The next night, the Nats could do nothing with Mike Fiers, and while E-Jax provided a quality start, Shawn Kelley and Matt Grace fell prey to the long ball and Nats lost 6-1.

But they came back the next night to take the rubber match in a thriller.  Stras faced off with Astros’ ace Dallas Keuchel, and the Nats built a 3-0 lead behind his six inning, no run, 3 hit effort.  Dusty then turned to The Firm, but in an unusual order and with, unfortunately, unusual results  — Doolittle pitched the 8th, giving up a run, and then Kintzler blew the save in the 9th, giving up two.  Thankfully, in the 11th inning, the Nats put together kind of a bizarre rally, keyed by this play shortly after what looked like a HBP was overturned in New York.

The extra inning game made a brutal travel schedule even worse and the next night the team was dragging when it faced, and lost to, Jacob DeGrom and the Mets.  But that loss did little to tarnish a really fine performance in these 18 games, thanks to solid pitching and timely hitting from some unexpected places.  The lead the team has built will serve it well as it welcomes back players from injuries and prepares for, we hope, a long run in October.