Yesterday, Dusty Baker promised a different line-up for today as he rests many of his veteran players who have ground out 20 games in 19 days up until today. Monday is a team off-day.  This will give many players essentially two days off before they return on Tuesday. The Braves then the Los Angeles Dodgers are coming to town.

“We have some young players who are going to play [on Sunday],” Dusty Baker said. “They’re not afraid or intimidated by being in the big leagues. That’s how you want your young players to be.”

There are a few hours before the line-up is officially posted. We have heard that Victor Robles will get his first Major League start today. The plan is to also have Pedro Severino catch Stephen Strasburg today.

This “showcase” line-up will give Dusty Baker and the front office staff a chance to evaluate some of these players for the remaining one or two spots that could be open on the NLDS roster.

Philadelphia will start right-hander Ben Lively in his 12th start of the season. The 2013 draft pick has made two good back-to-back starts against the Mets and Marlins going 13 combined innings and 3 earned runs, but he has also struggled with control as he walked 4 and had 2 hit-by-pitches. 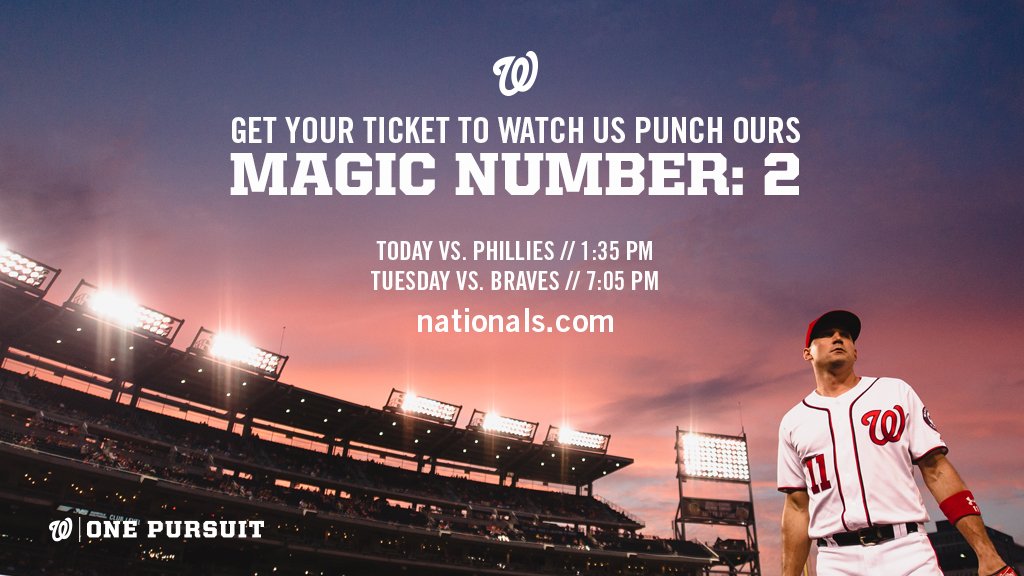 It’s beginning to look a lot like #Clinchmas! Today is a definite possibility that the Nationals can clinch the NL East crown if they win and the Marlins lose. One of the side stories to watch will be what Bryce Harper has planned to cover his noggin when the celebratory beverages will be sprayed and poured on his head. In 2014, Harper wore a custom fireman’s helmet, and in 2016 he had the Katie Ledecky swim Speedo cap. Some nominees for Bryce would be a DC police motorcycle helmet or a Las Vegas Raiders helmet.

Nats' magic number is 2. What will Bryce Harper slap on his head to celebrate this time? pic.twitter.com/DOrVyLmTgj

Here's how we're lining up this afternoon. pic.twitter.com/3rJVQSwRC7