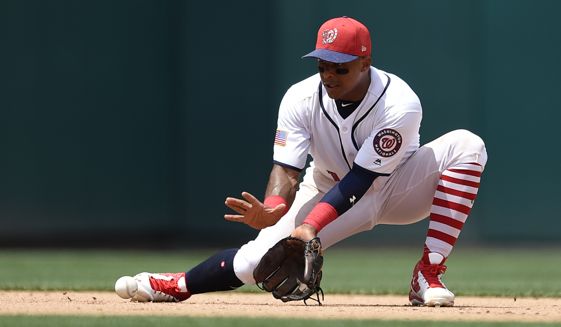 For all the discussion of lineup construction and Wilmer Difo’s proper place in the Nationals lineup, analysts have failed to realize one tiny, but important detail: Wilmer Difo might be the best defensive shortstop in baseball.

There are two mainstream statistics used to try and determine how much a player does to help his team on defense. Both of these are “counting” statistics, which means they count up factors, like RBI’s counts up the number of runs a player has batted in.

Ultimate Zone Rating (or UZR for short) is, according to Fangraphs.com, an “advanced defensive metric that uses play-by-play data recorded by Baseball Info Solutions (BIS) to estimate each fielder’s defensive contribution in theoretical runs above or below an average fielder at his position in that player’s league and year.” In non-sabermetric talk, it assigns a number of runs (or partial runs) to a given play a defender does (or does not) make, with the league average in any given year being zero. 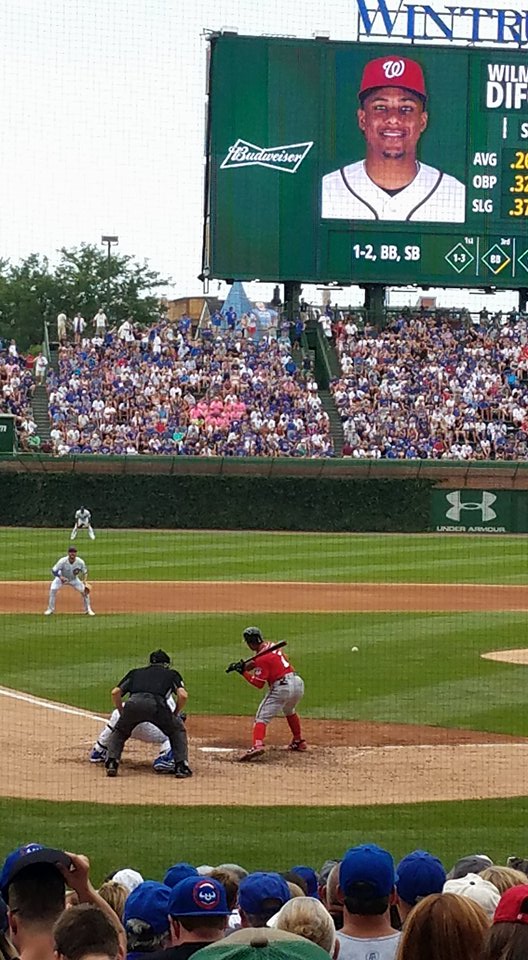 Photo by Michael Daalder for TalkNats

UZR/150 is the rate statistic for Ultimate Zone Rating, that is, expected UZR per 150 games, to compare a players defensive skill with another if they have not played the same number of innings. An example of a rate statistic would be batting average, as you can compare players production regardless of the number of at bats.

Defensive Runs Saved (DRS for short) is another similar counting metric that “tells you how many runs better or worse that player has been relative to the average player at his position.” So a shortstop with +4 DRS is four runs better than the average shortstop.

Wilmer Difo has played just 281.1 innings at shortstop this year, and most of them have come since Trea Turner has been on the disabled list. When you browse the defensive stats section of Fangraphs the lowest number of innings for a “Qualified” shortstop to appear is Erick Aybar’s 641.1.

Under the “Qualified” number of innings, all the names one might expect come up. Andrelton Simmons has 19 DRS this year, a UZR of 10.3, and a UZR/150 of 16.9. Addison Russell has a 14 DRS, but a UZR/150 of just 8.9. Nonetheless, no matter which way you slice it, or how you prefer your stats, there is a clear top tier of players.

Yet, adjust the minimum number of innings to 200, and a new name appears on the list.

That’s right, Wilmer Difo has the fourth most Defensive Runs Saved at shortstop in all of baseball. In fact, his 8 DRS in 281.1 innings would balloon to 27.4 had Difo played as many innings as Simmons, 8 more than the current leader. He ranks 11th in UZR, but fifth in UZR/150, which equalizes playing time.

Difo has been better on defense than Brandon Crawford, with more than twice Crawford’s DRS in almost a fourth of the playing time. In fact, just doubling Difo’s innings and DRS gives him more than Russell and Iglesias in 166 fewer innings.

So you see what I’m getting at when I make the outrageous claim that Difo could be the best defensive shortstop in baseball.

Part of what makes Difo so good on defense is his speed. He is able to get to the ball quickly, which means he can get to more balls in play, increasing his range. Lots of people know Difo is fast, but few know just how fast he really is.

The good guys over at BaseballSavant.com have a sprint speed leaderboard. Sorting by position to shortstop, you can get the following chart.

When we look at Difo’s Range Runs Above Average statistic (another counting statistic) he ranks 4th, again in many fewer innings on defense. Double the innings, and Difo has the best range of any shortstop, 6.8 RngR to 6.4 RngR for Simmons.

Keep in mind that, while impressive, Difo does not have a long history of playing at shortstop. In fact, he has just over 300 innings at short in his career, which is a very small sample size, just about a third of a full season. That being said, the metrics see him as an elite shortstop, made even better by how few innings he has played.

So where does Difo fit in on a team that already has an elite (though not defensively elite) shortstop? With Trea Turner returning from the disabled list soon, the Nationals will find themselves with a logjam at short. 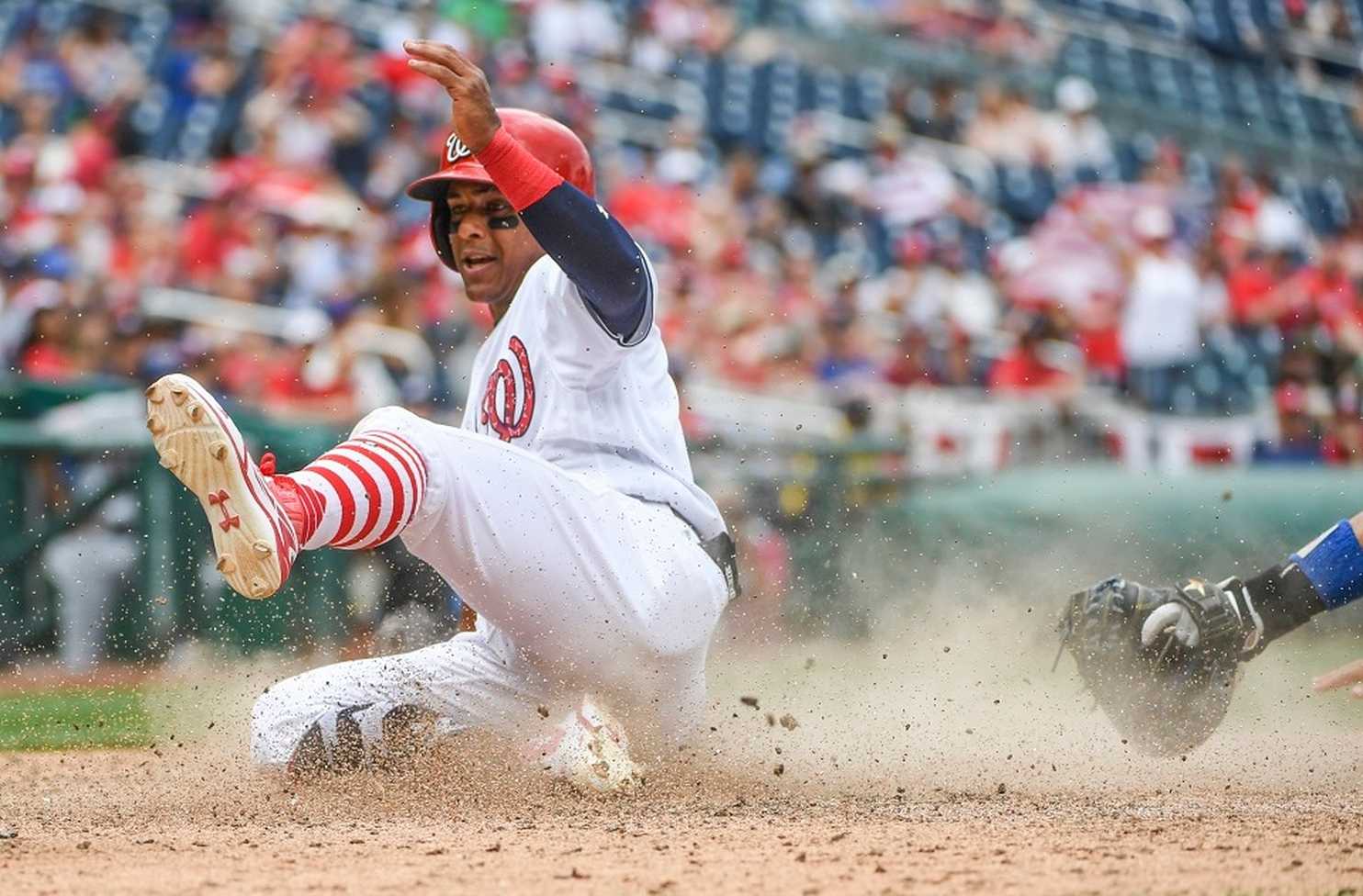 I am an advocate that Turner, who is above average on defense at shortstop but not in the elite category with respect to his defensive at shortstop, could move back to the outfield. Many players who were not very good, or at least not great, have moved to the outfield and had tremendous success.

Shortstop is well known to be the hardest position to play, and center field is somewhat easier. Thus, an average shortstop moving to center field becomes above average in the outfield. According to Baseball Between the Numbers by writers at Baseball Prospectus, a SS moving to CF tends to be about 4.6 runs better than at short. So while Turner may be good at shortstop, he is likely to be even better in the outfield.

A perfect example of this is Billy Hamilton. While Hamilton was a passable shortstop in the minor leagues, once he made the transition to the outfield he quickly became one of the games elite defensive center fielders. Who knows, the same could happen to Trea Turner.

Or perhaps not, and why mess with a good thing going with Turner at short? He isn’t bad, in fact he is above average. Yet when a team is given extraordinary defensive talent, that player isn’t supposed to be on the bench, even if the bat skills are not there.

An outfield combination for next year of Bryce Harper, Adam Eaton, and Trea Turner would be one of the game’s elite outfields, and the Nationals may have one of the games best defensive shortstops trotting out each day. Much of this depends on Michael Taylor and Brian Goodwin and other factors. Mostly it is dependent on need. Positional flexibility is a definite plus for the Nationals.

Who could possibly say no to that?

View all posts by Michael Daalder →
This entry was posted in Difo, Feature. Bookmark the permalink.
← Previous Article | Next Article →