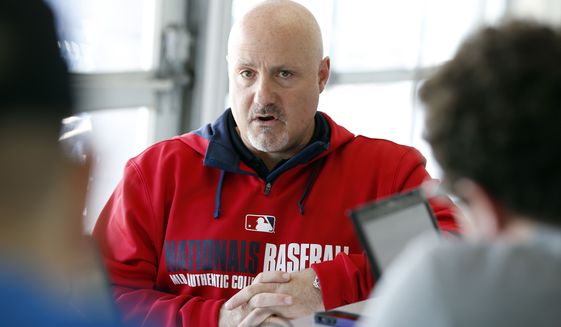 Today is the first day of the 2017 MLB amateur draft. The Nationals first pick is at number 25 which some believe never gets you top talent. Au contraire, Mike Trout was a 25th overall pick and so was Joe Ross. There’s Matt Cain and Matt Garza too, and a guy named Chuck Knoblauch. In all, there have been over 20 draft picks from that 25th spot that have contributed positive WAR to their teams.

The Nationals are looking for the highest impact players in their spots in the draft. It usually involves a player who was overlooked or a diamond in the rough or players who Mike Rizzo feels are undervalued. Most scouts believe Carter Kieboom who was chosen 28th overall last year has been a pleasant surprise and on Baseball America’s mid-year report they moved him up in their rankings, and he is now ranked number 98 in all of baseball.

With all that said, expect Mike Rizzo to draft a lot of pitchers this year and don’t be surprised if he takes a chance in the third round on a high school arm who is fully committed to college. Rizzo has done a great job of convincing college-bound kids to sign with the Nationals. The Nationals have been tied to Seth Romero who was twice suspended from the University of Houston.

Will the Nationals draft Darren Baker who is Dusty Baker‘s son on Day 1 of the draft? It could happen but it would be a wasted pick. Darren Baker did not even crack the Baseball America Top 500 and when you divide that out it means he wouldn’t make the Top 15 rounds. But, there have been youngsters like Baker who have baseball and athletic ability who fill out their frames with age and become good MLB players. Expect the Nationals to draft Darren Baker at some point in the draft. He will probably still go to Cal State where he has committed to for college.

We really need to go back in time to a reality that few will want to remember because it is far easier to complain about the Nationals poor bullpen and general manager Mike Rizzo and Nationals ownership.

Here is the reality — the Nationals made an organizational decision to acquire a young closer named Kenley Jansen and put all of their off-season resources into acquiring him as a Free Agent after Mark Melancon signed with the Giants.  Mike Rizzo had ownership’s support to spend the money to go for Jansen after Mark Melancon signed early in December in an extreme overpay by the Giants and while the Nationals were “on” him, they weren’t going to top that price which put them in position to go 100% after Jansen.

Jansen’s agent at the Wasserman Media Agency confirmed the Nationals made the largest bid for Jansen which was a staggering offer of $85 million with only $5 million deferred. News broke in mid-December that Jansen had agreed to a $80 million deal to stay with the Dodgers. All indications were that Jansen would go to the highest bidder, and as we know that turned out to be a rare time that it was not the case. Jansen stayed with the team he signed with as a youngster for less money because he realized that a few million dollars wasn’t going to make him happier to change teams. It is commendable for Jansen even though some believed he “used” the Nationals to get a higher bid from the Dodgers, but it was water under the bridge at that point as the bigger picture had caused a big dilemma for the Nationals who were without a proven closer.

Those that deal in hindsight say but but but the Nationals could have had Greg Holland. Well sure they could have and almost did until the price escalated and in risk/reward there was no way they were going to do that. Colorado not only had the cash to risk but had no closer to elevate and if the rumors were correct, part of the deal to acquire Holland was to name him the closer. Holland at a showcase in the off-season after returning from surgery, was described by several scouts at his showcase as underwhelming. His fastball had little zip on it and he looked a shadow of his former self. While possibly true at the time, he is now the best closer in baseball. The Rockies risk has paid off so far.

The Nationals kept shaking the tree in the trade market and a trade could not be finalized for David Robertson. It became clear that Dusty Baker‘s closer would be promoted as an internal candidate from a pool of Blake Treinen, Koda Glover, and Shawn Kelley.

It has not worked out with the current configuration. The bullpen has blown some tie games this week. It wasn’t necessarily wins that were blown, but if you really delve into what happened in these losses there is plenty of blame to go around such as Koda Glover pitching on Saturday while he was actually hurt. Then you have Shawn Kelley giving up a 3-run homer as the loser of the Saturday game. Yesterday’s game was lost by Max Scherzer and the bullpen couldn’t save him, but let’s be real that you aren’t going to win many games when you score just one run from your offense.

The media has made the bullpen the target and the fans need someone(s) to blame. While the Nationals bullpen has some of the worst statistics of any bullpen, they were actually the best bullpen in the month of June until Saturday’s game. They had a nice streak going of being unscored upon in 12 of their last 15 games until the Saturday debacle.

Few want to talk about it as it is easy to point fingers and say they should have signed Greg Holland or Mark Melancon or Kenley Jansen. Don’t look now but Mark Melancon is not doing well in San Francisco with his 3.12 ERA and his sub-par 23% blown save percentage. He is blowing just about 1 out of every 4 games for the Giants.

Of course hindsight wishes upon a star that Greg Holland was closing for the Washington Nationals, but dealing with reality is where we are right now and that means working with what you have.

What if the script went the right way yesterday or on Saturday and Koda Glover told the truth about his back and Anthony Rendon fielded the grounder? Who knows. The Nationals probably win the game on Saturday that they should have won anyway if Wilmer Difo sprinted home on Trea Turner‘s bunt. The fact is not every issue is on the bullpen. Max Scherzer left that game with one out and two speedy runners on base. Scherzer walked a batter hitting .114 and that can’t happen.

Max can’t walk away blameless in yesterday’s loss nor can Dusty Baker for the losses over the weekend, and neither can the bullpen.

“Hug ’em. Love ’em. Maybe chastise ’em some, too,” Dusty Baker said. “But you don’t kick ’em when they’re down. They are getting kicked enough by [the media] and the fans.”

Zimmerman has made these proclamations before, and it is better to be cautious which will be the “party line” if Zim doesn’t play tonight. Back issues are nothing to take lightly, and with Zimmerman’s injury history the fanbase has a right to be nervous. Zimmerman is having the best year of his career, and the stats back that up. He is needed back in the line-up only if he is 100% healthy otherwise stick with Adam Lind or Daniel Murphy at 1st base.

It could also be time to shift Daniel Murphy to 1st base with Stephen Drew at 2nd base and Adam Lind in leftfield. Just make sure of one thing, keep Ryan Zimmerman out of the line-up until he is 100% pain-free.