Nats select a closer; Opening Day is getting closer and Strasburg will start; More cuts make it clearer 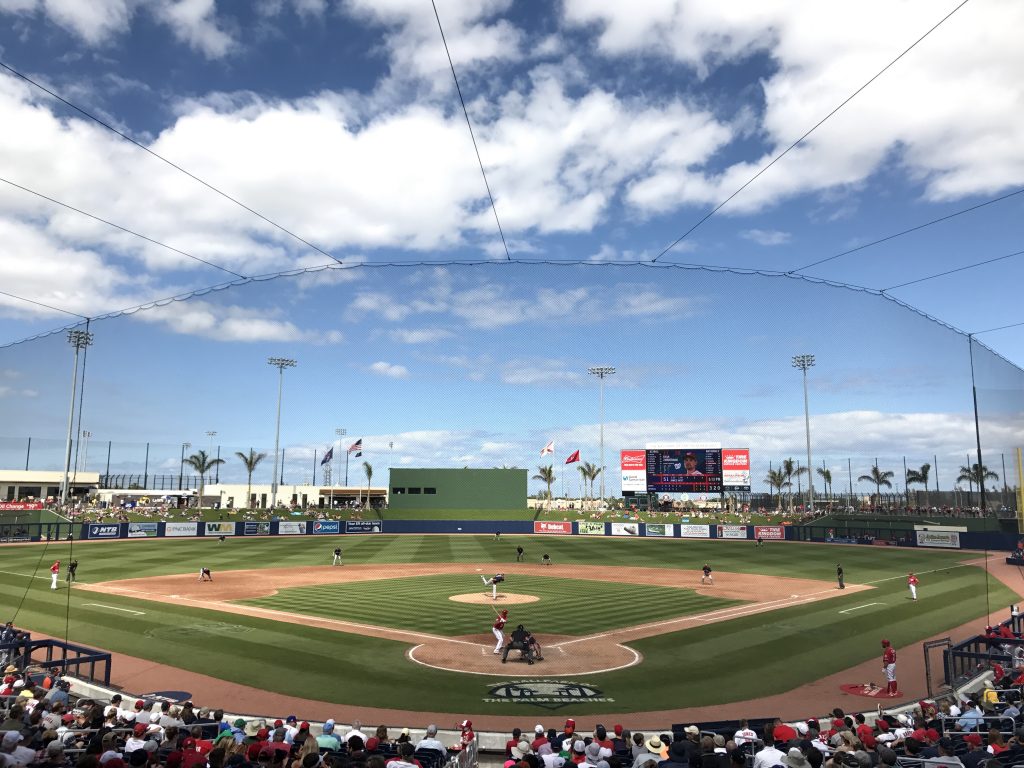 Today at 1:05pm at The Ballpark of the Palm Beaches, the Nationals square off with their stadium neighbors, the Houston Astros, once again, and today the Washington Nationals are the home team. Gio Gonzalez gets the start against right-handed pitcher Joe Musgrove.

There was a lot of news that came yesterday before, during, and after the game. News before the game broke that Dusty Baker has chosen his closer, but he is not publicly disclosing who that is. Jon Heyman of FanRagSports.com says Nats leaning towards Koda Glover as the closer, but since the name has not been disclosed, it would be fair to mention the other candidates are Blake Treinen and Shawn Kelley.

During the game, Tanner Roark built upon his last outing which was in the World Baseball Classic as Roark threw a total of 71 pitches yesterday which was at the high-end of our 65-70 pre-game estimate. In this start, Roark went 5 1/3 innings allowing 3 hits, no walks, and 1 earned run which will allow him to get into the 80’s in his next start and ready for his first start of the regular season. Daniel Murphy did not show as much rust as most expected including Murphy himself who returned from the WBC with limited work. Murphy went 2-for-4 in yesterday’s game but had two strikeouts including a three-pitch strikeout in his final at-bat of the day.

“I wouldn’t say smooth as usual, but I felt pretty good in there,” Daniel Murphy said after the game. “I saw the ball okay. I wanted to get deep into counts today, see as many pitches as I could. I had two punch-outs, too, so I would prefer to cut down on those. But it was nice to get in there and get four [at-bats], and play defense as well.”

Also in yesterday’s game, there were other standouts including Ryan Zimmerman and Matt Wieters who both tallied two hits each in the game. That was Wieters best offensive game so far for him.

After the game, Dusty Baker announced five more cuts on the roster which included Brian Goodwin and Pedro Severino. By cutting Severino, it all but named Jose Lobaton as the back-up catcher to Wieters and gave more clarity to a bench which should have Lobaton, Stephen Drew, and Chris Heisey.

After Saturday’s game, bench players left in camp who are vying for the remaining two bench spots are Adam Lind (.171 BA), Clint Robinson (.214 BA), Brandon Snyder (.276 BA), Wilmer Difo (.304 BA), and Michael Taylor (.390 BA). Last year, it was Clint Robinson and Michael Taylor who made Dusty Baker’s opening day bench. Of the bench potentials, only Adam Lind is on a guaranteed Major League contract for 2017. Clint Robinson has no remaining minor league options, and the other three players could all be optioned to Triple-A Syracuse.

Brandon Snyder is clearing out his locker. Effectively leaves Difo, Taylor and Robinson in camp and contention for that final bench spot.

For the bullpen, Joe Nathan is still in camp and even though he has an opt-out, he could be part of the depth the Nationals need in the minor leagues if he would accept the assignment since he signed a non-guaranteed minor league deal. Even if Nathan goes past today’s opt-out date, he could request his release. The chance of Nathan making the opening day roster is slim to be quite honest. 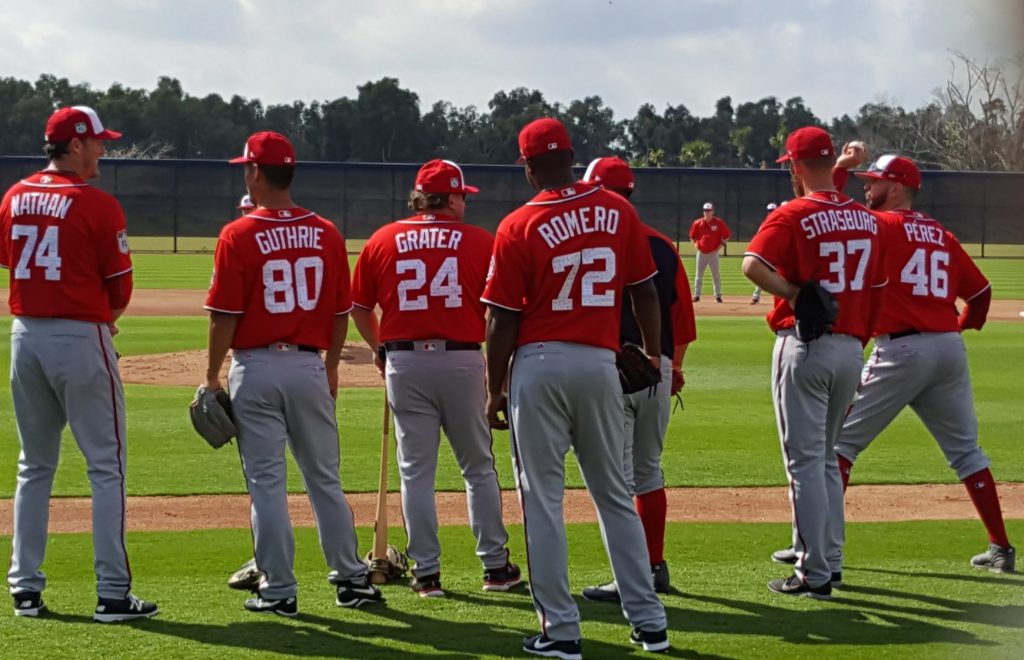 Photo by Stan4Nats for TalkNats

The bullpen looks to be complete at the moment with three lefties and four right-handed relievers. The lefties are Sammy Solis, Oliver Perez, and Enny Romero. The righties are Joe Blanton, Shawn Kelley, Blake Treinen, and Koda Glover. The issue with this bullpen is no discernible long-man for Dusty Baker.

There is also the possibility that Joe Ross could start the season at extended spring training as the 5th starter is not needed until the 6th game of the season and Ross could conceivably start the 4th or 5th game of the season. Is it worth it for Baker to carry an 8th reliever for the first 5 games? You never know. The schedule usually has a few days off early in the season where the Nationals could carry an extra reliever for 10 days or more, but unless there is an early season rain-out, that won’t be the case this year.

We have always expected the unexpected from Mike Rizzo, and Dusty Baker surely seems to enjoy keeping his secrets as aforementioned about the closer but Baker just announced that Stephen Strasburg would be the opening day starter. It is not much of a surprise given that Max Scherzer had the issue coming into camp with his knuckle on his right ring finger. There is plenty to grapple about, but the starting rotation seems set. The line-up construction on the other hand has not been what many thought it would be. The other source of consternation has centered around the Nationals newly acquired centerfielder, Adam Eaton, who has spent most of spring training batting either 6th or 7th in the batting order.

“General Manager Mike Rizzo has insisted that hitting three lefties in a row is not a strategic problem if the trio is Eaton, Harper and Murphy ‘because their splits are basically the same against both left and right-handed pitching’.”

The line-up construction becomes debatable, and disagreement between the manager and the GM is never good. They can both probably be happy though with Ryan Zimmerman’s production since March 15th.

The other exciting news is that the Talk Nats Podcast is LIVE for the 2nd episode! We were able to arrange for Trea Turner‘s high school coach, Larry Greenstein, to come on the show. We’ve interviewed Coach Greenstein before for the blog and you read some of their high school stories like the Jose Fernandez playoff game. The cracked aluminum bat story is a great one! You will also get to hear Kevin Nibley and Bryan King debate the Ryan Zimmerman stats with Draz and JCCJohn.

We do have a game for today, and here is the starting line-up: