The New York Yankees made this trip to Palm Beach County as a true road trip. If you were to drive from their stadium in Tampa to The Ballpark of the Palm Beaches, it is over 204 miles and it would take you almost 3 1/2 hours. If you were to fly by a charter, it would take about 30 minutes. The Yankees stayed in a hotel overnight in Palm Beach County as they played the Astros yesterday in front of a sell-out crowd dominated by Yankees fans.

The Yankees will have a few regulars in today’s line-up plus an impressive glimpse into their farm system as they play top prospects like Gleyber Torres (.444 BA), Greg Bird (.400 BA), Clint Frazier (.343 BA),  and Aaron Judge (.275 BA). You might also see a few veterans like the nefarious Pete Kozma who is in Yankees camp competing for a bench spot.

The scheduled starters today are Vance Worley for the Washington Nationals and Michael Pineda for the Yankees. The game time is 1:05pm and will be televised on MASN and on MLB Network out-of-the-area.

Dusty Baker chose Vance Worley to start today over A.J. Cole (10.22 ERA). Cole started five days ago for Dusty Baker against the Astros and was torched for 7 earned runs over 3 2/3 innings. If Dusty Baker goes with a long-man in the bullpen, that competition is wide open and a pick ’em presumably from Worley, Cole, Jeremy Guthrie, Matt Albers, and Jacob Turner. There is always the possibility that Mike Rizzo could sign a veteran pitcher released by another team to fill a long-man role. There is another twist that Dusty Baker could forego a typical long-man’s spot in his bullpen and use former starter Oliver Perez in a mop-up role although he has not been used in long relief.

The hottest hitter in camp over the weekend was Ryan Zimmerman who clubbed two doubles and a home run and is 7-for-his-last-10 raising his spring training batting average to .259 with an .819 OPS, and Zimmerman has lowered his Groundball to Air ratio to 1.14 which is almost identical to his career spring training ratio of 1.11.

Mike Rizzo has put a lot of faith, as well as his own reputation, on the line in backing Ryan Zimmerman as Rizzo did not seek a front line first baseman this off-season rather a complementary piece to Zimmerman as Rizzo acquired left-handed Adam Lind.

“I’ll bet you the best dinner in Chicago at Joe’s Stone Crabs and Steaks that Zimmerman will hit at least .275 with 20 homers and 75 RBI,” Mike Rizzo said.

Rizzo made that bold comment to Thomas Boswell of the Washington Post on the same day that Dusty Baker told Boswell that Zimmerman was “his pick to click” this season. Both Rizzo and Baker are firmly on the side of Zimmerman who is coming off of an awful 2016 season and his worst statistically where Zimmerman admitted he became too predictable and defenses took advantage of that. 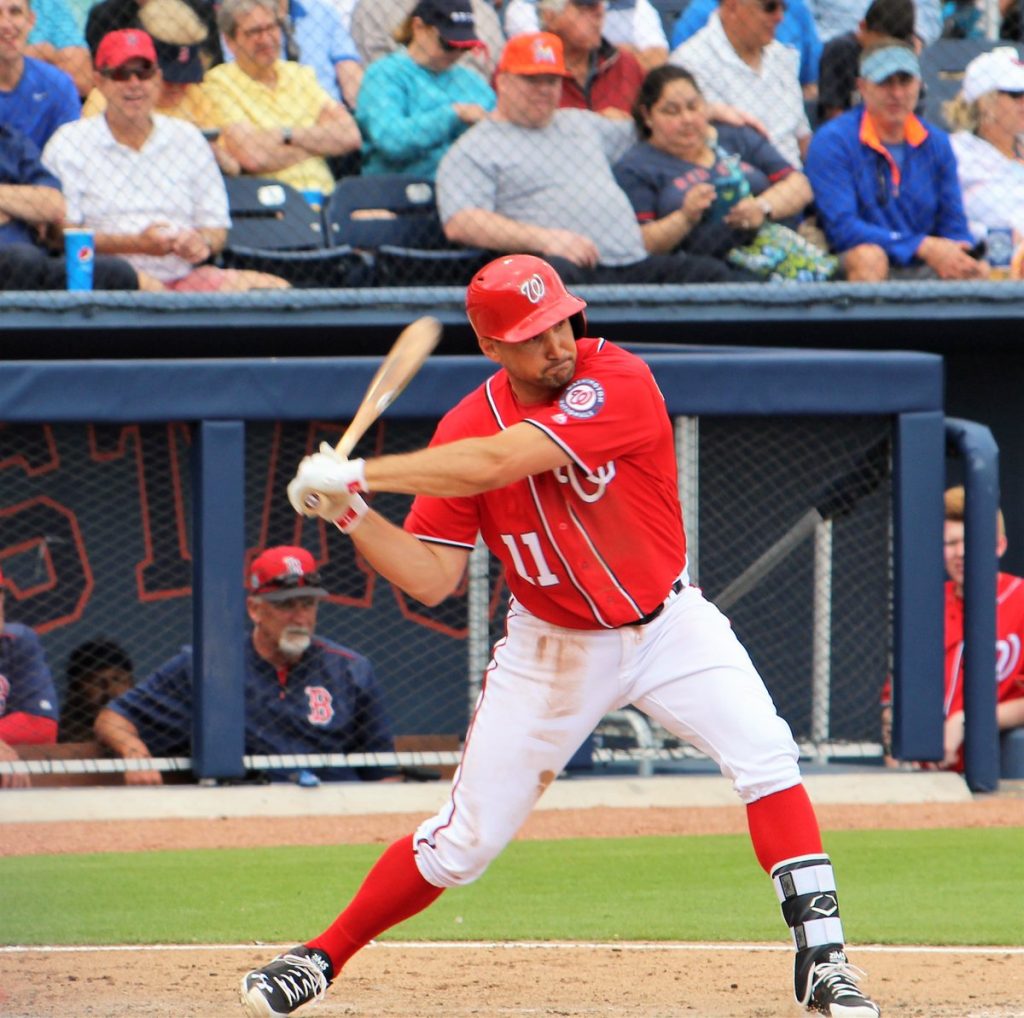 Zimmerman has been moving all around the batter’s box this spring. One game he was up on the plate, another he was on the outside extreme edge, but mostly in the middle as he may have found his comfort spot. He has been working his hands lower which seems to be helping his launch angle.

“[Ryan Zimmerman] stayed off some tough pitches, hit a ball to right; that’s a great sign that he’s staying behind the ball and timing it,” Dusty Baker said. “Yah, come on Zim, because we’re counting on him.”

Daniel Murphy early in camp had also been very supportive of Ryan Zimmerman and was by his side before leaving for the World Baseball Classic. The support for Zimmerman has really been felt throughout the clubhouse, but it has been up to Ryan Zimmerman himself to change.

Those words seem like a true confession on reality. Ryan Zimmerman’s first hits of spring training came on the Ides of March last Wednesday which might have been a sign of things to come with a little St. Paddy’s weekend luck sprinkled in, and whatever it is, Zimmerman wants more of it!

Some game notes, both Jayson Werth (knee) and Jose Lobaton (wrist/forearm) return to action today as expected as both had been dealing with ailments. Lobaton was sidelined with that wrist/forearm issue which landed him on the DL last year.

Dusty Baker was supposed to have the pitchers batting for themselves, but pitching Vance Worley changed that plan. Adam Lind gets the start today as the DH, and he has much to prove in what has been a lackluster spring.

This entry was posted in Analysis, RyanZimmerman, SpringTraining. Bookmark the permalink.
← Previous Article | Next Article →