What Does Statcast’s New Catch Probability Metric Tell Us About the Washington Nationals? 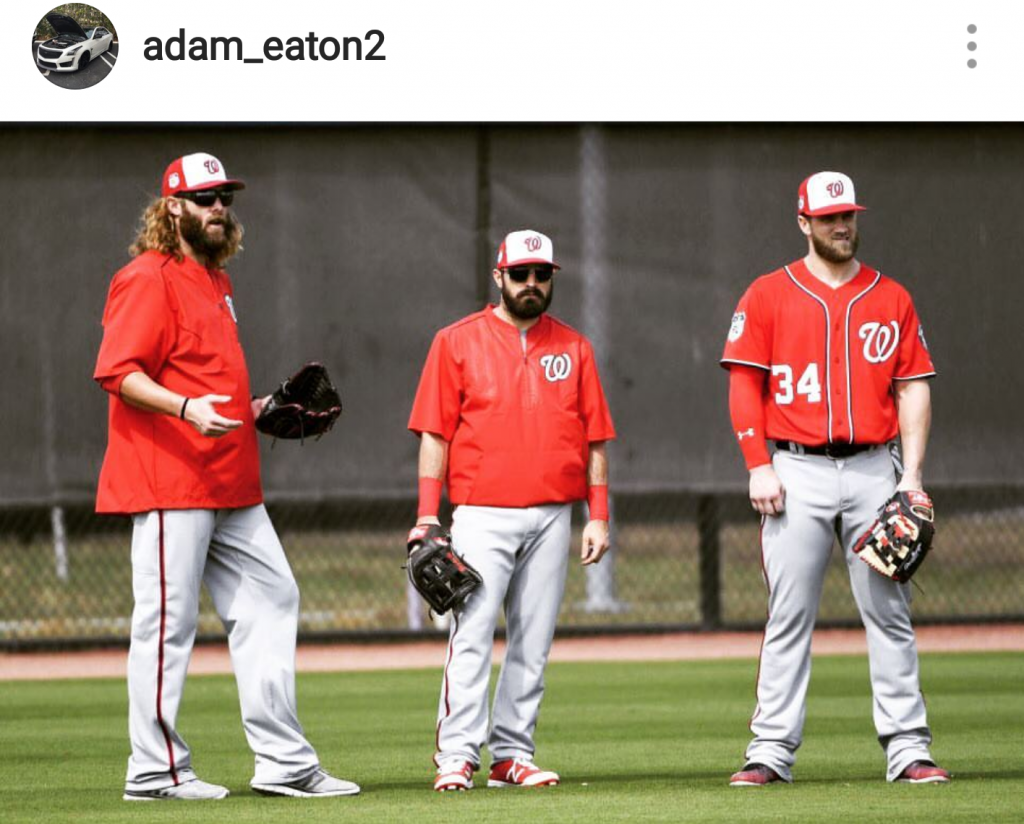 The acquisition of Adam Eaton in the Washington outfield will provide a new look in 2017. Will he help last year’s below average defense?

I helped introduce MLBAM & Statcast’s new Catch Probability metric at RO Baseball on Friday. Take a look through the article to get up to speed on the new metric, and let me know if you have any questions on the particular study I attempted.

But today I will be looking at solely the Washington Nationals and what the new data can tell us to expect in 2017. The posted chart of all 30 teams’ change in catch probability placed the Nationals as one of the biggest “drops” in the statistic from 2015 to 2016. Whether it was due to the loss of Denard Span, less playing time for Michael Taylor, or more playing time for Jayson Werth, the unit appeared to regress.

Obviously the 2017 Nats outfield will look different than the 2016 version. Bryce Harper and Werth will still be patrolling the corner positions, but Mike Rizzo didn’t mortgage the future for just anyone — the front office is hoping Adam Eaton is the key piece to a World Series-caliber outfield.

If you read through the RO piece, you can see I already dove into Eaton’s numbers quite a bit. It’s well known Eaton made highlight reel catches all season in 2016, but the probability numbers show he regressed a bit on the easier catches.

I brought up in the piece about not being able to separate by what position Eaton was playing at in each opportunity — he played 48 games in center along with his 121 in right in 2016. I also can’t pull which outfielders were out there with him, which I postulate may have made a difference.

We do know — or can at least assume — Eaton will start in center field for the 2017 Nationals, and be there to stay for the long haul. The data does allow us to go back to 2015 to look at Eaton’s numbers, where all 145 of his games played were in center field, so that may give us a better idea of what to expect this upcoming season.

While there has been some trepidation — from myself included — about Eaton regressing with a return to center, these Statcast numbers portray an excellent outfielder. But how much of an improvement will it be over the Nats’ 2016 center fielder numbers?

Last season, Ben Revere, Michael Taylor, and Trea Turner started 156 games between them in center field. Revere started 14 in left as well, but we’re going to pull his season numbers as a whole here.

The improvement may appear small by these numbers, but it is apparent Adam Eaton will help the DC center field situation. Enough to be able to swallow the large price of the trade that brought him here? Potentially.

You all are probably interested in Washington’s two staple corner outfielders as well. Let’s take a glance at where they rank in the two years of data available.

It’s not exactly a pretty picture — nearly across the board, both Werth and Harper showed below-average numbers. Werth hasn’t made a single 5-Star catch in the last two years in 54 (!) opportunities.

Harper has made one 5-Star catch in each of the last two years, and although I’m not 100 percent positive (Statcast does not yet list the play data for each catch), I believe this was the highlight grab in 2016.

Could Eaton’s presence in center raise Harper and Werth’s play like a tide lifting ships? It’s possible and with the cost Eaton came at, the front office certainly hopes as much.

Washington was one of several teams to attempt to improve an area which has been overlooked across the league over the years. Werth is the perfect example of where the game was — in contrast to where it’s starting to go. It was once a commonly held belief the left field position was somewhere to “hide” a power bat. However, now we can see with the advancements in technology how many runs are lost to poor defense, and if the sacrifice is truly worth it.

But Taylor is still around to sub in for Werth in the late innings, plus the soon-to-be 38-year-old isn’t getting any younger, and may need more days off in the upcoming year.

In 2016, Fangraphs had Werth worth (sorry) 3.4 runs offensively, while taking away 12.4 runs defensively. Taylor, on the other hand, was worth 2.2 runs defensively while costing 5.9 runs on offense.

I believe adding Statcast’s data would push their value even further apart on defense, giving Taylor an even bigger upper-hand by comparison.

But we’ll see, I’m not calling for any benchings, and baseball is not played on paper. Werth’s veteran presence, added power, and his ability to hit at the top of the Nationals lineup are all variables that need to be considered.

We do not have metrics to calculate all of those things yet — and may never. But now we have new methods to examine defense, which will continue to grow in the near future, and we will continue to find new ways to analyze this wonderful sport.

This entry was posted in Feature, Sabermetrics. Bookmark the permalink.
← Previous Article | Next Article →