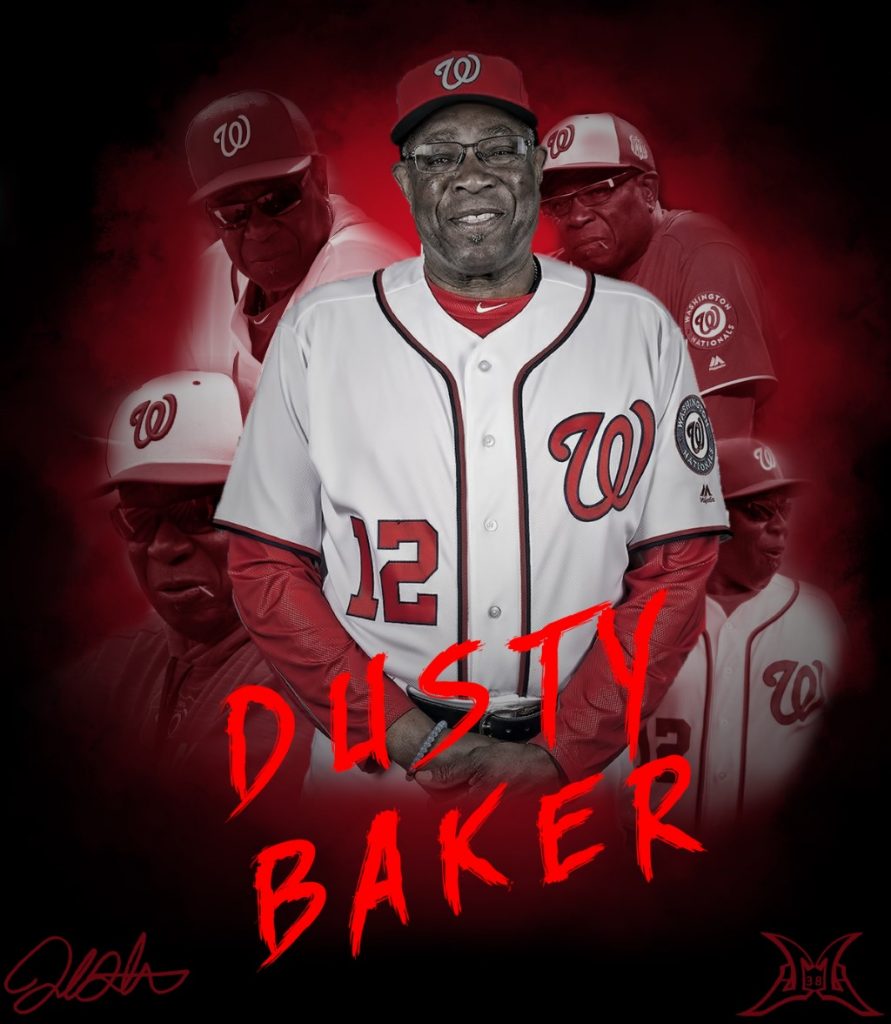 You most likely have heard that Dusty Baker is in the final year of the two-year contract he signed early in the off-season after Matt Williams was let go after the 2015 season.  The 67-year-old Baker is a cinch for the Hall-of-Fame if he can hoist a World Series trophy as a manager and would then join the pantheon of great managers as a shoo-in if he gets that World Series hardware. But Washington, D.C. has not won a World Series since 1924 when Walter Johnson was the MVP  of that season at the age of 36. Dusty Baker just got his 36-year-old pitcher less than two weeks ago when the Nationals signed Joe Blanton. Whatever the magic formula is, Dusty Baker plans to get it.

Dusty Baker was well versed on the current events and history of Washington, D.C. sports successes and failures before he sat for his introductory press conference in the autumn of 2015 at Nationals Park. The Redskins’ 1992 Super Bowl XXVI  is the last D.C. championship other than DC United’s four MLS titles from 1996-to-2oo4, but cities are still mostly judged by their conquests in the top 4 sports of baseball, football, basketball, and hockey. One of Baker’s contemporaries that he has called upon in the past has been Joe Gibbs who knows about winning in Washington, D.C. as he had 3 Super Bowl championships with the Redskins. Gibbs also could share with Baker what it is like to be running an elite sports venture well past the age that you become eligible for social security as Gibbs runs Joe Gibbs Racing on the NASCAR circuit at the age of seventy-six.

“I think about unifying a town and it would put the Nationals on the map,” Baker said. “I mean, rightfully so, it’s a Redskins town. … They’ve been there a long time and they got a history of success. Heck, I called Joe Gibbs last year when I got here and asked him some questions about some things. You can just have the whole city start thinking positive.”

Like Gibbs who won 3 Coaches of the Year awards from the Sporting News, Dusty Baker has won 3 Manager of the Year awards. They are almost kindred spirits by geography, philosophy, success, wisdom, faith, and chronology. What separates them are those elusive World Championships that Gibbs has attained.

There are 72 different managers who have won at least one World Series championship, and Baker begins the 2017 season with 1,766 managerial wins in the regular season and wants to become the 73rd manager to join that elusive club. If all goes near the plan, Baker will end up the 2017 season with the 15th most wins as a manager in MLB history, and Baker will once again return to the post-season. Many baseball people feel once you make it to the post-season, the rest is a “crap shoot”. The best team does not always win the World Series.

A year ago, Dusty Baker said his 2016 Nationals roster is the best team he even inherited. That team exceeded all the pre-season estimates for the regular season. For this year, it is a case of déjà vu, Baker has been in this exact situation before in a contract year trying to figure out what he can do to further his tenure in the same city—with the same team, and he would like to replicate what Tony LaRussa accomplished in winning the World Series and retire as a winner on his own terms which would change Baker’s history where he has not left a managerial job on his own terms. Baker has been fired as a manager by every team he has worked for prior to the Nationals. Baker’s resumé shows 3 firings ending his employment with the Giants, Cubs, and Reds. In fact, Dusty Baker is the only manager to be fired after taking his team to a Game 7 in the World Series which happened with the San Francisco Giants in 2002.

We don’t know the genesis behind, “Managers are hired to be fired”, but that cliché has been around for over 30-years, and was the subject of an article in Sports Illustrated back in 1981 and overused so much that it has become a platitude even though it is so true. Dusty Baker knows that cliché all too well. The banalities of contemporary baseball manager firings is so commonplace, but for an elderly manager, second, third, and fourth chances usually don’t come along often and Dusty Baker might be at the end of the line where it is “D.C. or Bust” for Dusty like it was for Davey Johnson in Washington. You don’t have to be a genius to know that it is a “what have you done for me lately” life in baseball.

Speaking of geniuses, baseball has had their share in the new age of sabremetrics but it might not have helped Brad Ausmus who was an Ivy League graduate at Darmouth. Hall-of-Famer Whitey Herzog won a World Series as a manager, and he never claimed to be a genius, but said if your bullpen is good you become a genius. Herzog’s philosophies on being a good manager start with having good players, a good bullpen, and a sense of humor.

“The three things you need to be a good manager are: players, a sense of humor and, most important, a good bullpen,” says the former Cardinals’ manager Whitey Herzog. “A manager doesn’t necessarily win games, but he can lose a lot of games. If you make all the right moves and your bullpen isn’t worth a damn, you’re not any good anyway. If the bullpen is good, you’re a genius.”

Does Dusty Baker follow those Whitey Herzog philosophies? Dusty has made several comments the last three weeks about his bullpen, and the lack of an acquisition of an elite closer.

“I ain’t have no choice [about my closer],” Dusty Baker said. “You know what I mean? Would I have liked to have gotten a Jansen or a Chapman or somebody like that, kept Melancon? That would’ve been our first choice. As a manager, you have to figure out what you’ve got and try to make it work.”

Yes, good managers figure out how to make their rosters work, and many analysts are confident that the Nationals bullpen will be better than last year’s opening day bullpen which had Jonathan Papelbon as the closer to start the season.

One thing Dusty Baker is known for is creating unity inside his clubhouse and building on team chemistry which is one of the intangibles of teams that win championships. Dusty Baker would also like to change the attitudes in D.C. to what Gio Gonzalez called ‘positivity’ which is the power of positive thinking.

To that thought, Dusty Baker has only been in Washington, D.C. physically for about 100 days in 2016. Dusty’s market research is good. He got out to speak to the people, but is it win at all cost for Dusty?

Would Dusty Baker make decisions in this 2017 season in an all or nothing move like a gambler does when he knows his last chance is a series of bold moves and pushes all of his chips forward into the center of the table. Dusty Baker could decide Erick Fedde gives him the best chance of winning now, and maybe the same for Koda Glover. The Nationals have always had the organizational philosophy to never go “all in” as slow and steady wins the race. The Adam Eaton move was as close as the Nationals have ever been to pushing their chips into the center of the table.

But baseball really is an all or nothing game as there can only be one eventual winner, and we ask, “Why not Dusty Baker”?

This entry was posted in Analysis, Awards, Dusty. Bookmark the permalink.
← Previous Article | Next Article →