Dusty hinted that Turner will hit leadoff. Then wondered if 3 straight lefties would be a problem and suggested Werth could hit 2nd again.

That tweet by Jorge Castillo (above) regarding Dusty Baker‘s comment that Trea Turner will hit leadoff with Werth batting 2nd for the 2017 Washington Nationals led to nearly 100 comments on TalkNats.com and the TalkNats Twitter feed.

Based on the comments, there is a division between those who think Eaton should bat leadoff versus Trea Turner should leadoff, but outside of Ron Darling, you would be hard pressed to find anyone who thinks Eaton would bat anywhere except 1st or 2nd in the batting order. Isn’t this why as Steve Mears wrote, “This is why Rizzo traded the farm for Adam Eaton.”

Jamey Carroll in an interview on TalkNats a few weeks ago compared the combination of Trea Turner and Adam Eaton atop of the line-up as wreakers of havoc reminiscent of Juan Pierre and Luis Castillo for the 2003 champion Marlins. Jack McKeon worked both players in the leadoff and 2nd in their line-up. The article can be found here.

Throughout the minors, Trea Turner killed LHP vs RHP. In the majors it has been the opposite, he has hit RHP better than LHP. That may not continue, but it was true last year. It’s a given Trea needs to walk more, and you would think that will happen as he gains experience. But his walk rate may not increase very much because MLB pitching has been forced to go right after him to hit because the last thing they want to do is walk him given his SB success rate of over 81% (editor’s note: We know that SB success rate could be higher with more stringent video replay rules).

Eaton’s splits are very even over his career if not leaning the opposite like Trea. He hits LHP well. For 2016 Eaton’s BB% (8.4) and K% (16.8) very in line with his career. Eaton’s career P/PA is 3.91, Trea’s is 3.81. Eaton has never stolen more than 18 bases with a career success rate of 67%. Why would you put Trea behind him if it suppresses Trea’s SB total? Trea’s career OBP is slightly higher than Eaton, .361 to .357, a wash in my mind. Maybe Eaton steals more bases in Dusty’s system. LHH Eaton hitting behind Trea covers up the catcher the way Dusty wants it.

The “experience” edge that Eaton may have is overblown to me. Trea is wise beyond his years and lead off in high leverage situations, including a playoff team in Washington last year. I don’t know if Eaton has been in the playoffs and too lazy to look it up to address it.

Maybe you don’t think you should have the three LHH in a row (Eaton, Murphy, Harper) as that is totally crazy (or is it?). As pointed out, Eaton hits the lefties well, and we know Murphy does too. That leaves Bryce who realistically can’t have a worse year than last year. If teams try to line up lefty starters for those three, which they may regardless, it can only benefit the rest of the RHH line-up that follows in the order.

This analysis might be able to go on, but that’s enough. Share this with Dusty.
Disclaimer: IF you trust that this math and logic makes sense.

Bryce Harper, by the way, posted this photo (below) of Trea on Instagram with his dog Wrigley. Last year, Bryce posted this nice Instagram message referring to Trea as, “My favorite player! #TBE” and many believe TBE is the acronym for “The Best Ever”. 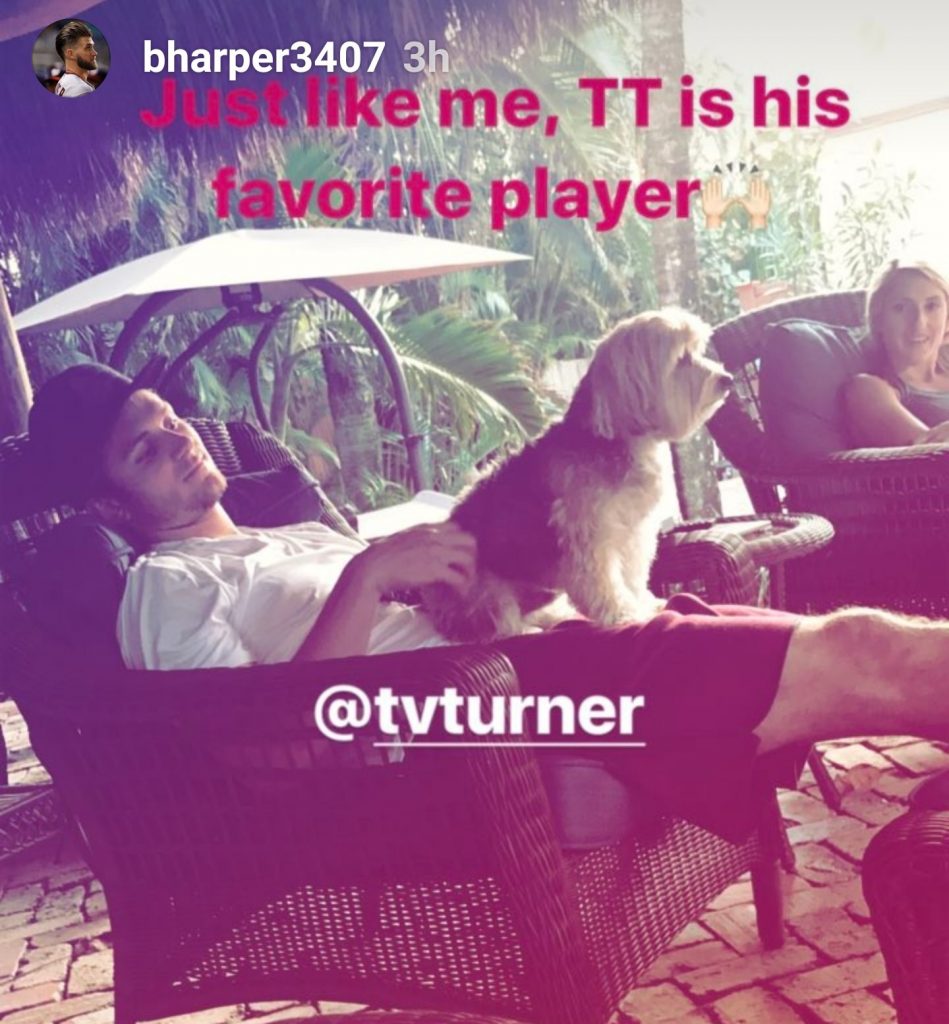 The other big conversation piece of the day was from this tweet about Daniel Murphy discussing Ryan Zimmerman:

This comment from Daniel Murphy not only shows leadership and initiative, but also compassion. You hope the articles that Daniel Murphy read was this one written in October of 2016 about Exit Velo and this one on Barrels.

“He hit the ball extremely hard last year,” said Daniel Murphy of his teammate Ryan Zimmerman. “It’s really hard to hit the ball on the barrel in this league, so he’s already kind of doing the hard part. I don’t think he needs to make big adjustments, either.”

Did it really take this long for someone to notice that the issue really isn’t Exit Velo but is launch angle? You hope not, but we appreciate that Daniel Murphy is trying to help. Will Ryan Zimmerman embrace the help from Daniel Murphy? We hope he does.

This entry was posted in AdamEaton, Analysis, Turner. Bookmark the permalink.
← Previous Article | Next Article →