What we also learned about Adam Eaton was that he changed his approach at the plate in mid-2015 where he was getting frustrated with “caught looking” strikeouts, and he took a more aggressive approach in two strike counts where he was swinging at close pitches.

“Not trusting the umpire to be honest with you [in 2015, I changed my approach],” Adam Eaton said to Mike Vorkunov in mid-2016. “If you went and looked at [the 2015 season there was] a lot of suspicious third strike calls.”

We looked at some strikeout charts from mid-2015 to test what Adam Eaton said, and the very first chart we loaded at random had a mistaken called third strike looking on June 30, 2015 against the Cardinals. 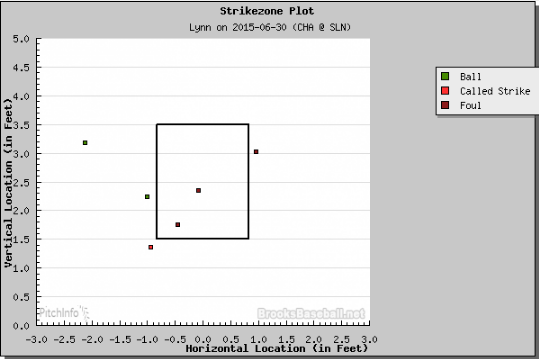 We checked through other charts, and Adam Eaton was on to something that there were several questionable 3rd strike calls.

“It might just be because I’m short,” the 5 foot 8 inch Eaton said. “Umpiring is difficult. It’s very difficult for them. Guys are throwing harder than they’ve ever thrown. There’s more movement on the balls than there’s ever been. So for me, I trust myself to put the bat on the ball than putting it in the hands of the umpire.” 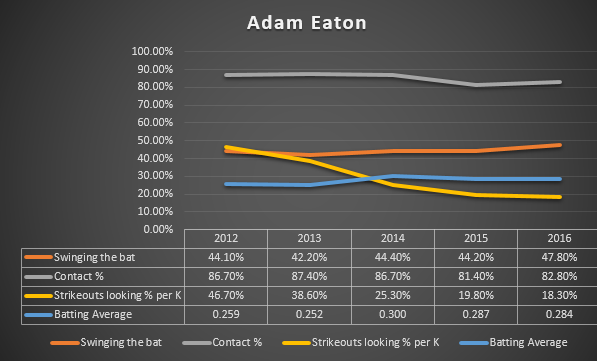 Adam Eaton was a part-time player in 2012 and 2013 with smaller sample sizes. Eaton set a record for plate appearances in 2016 while lowering his K% from 2015 and increasing his contact %. You could probably surmise that the reason for the slight decrease in batting average was because Eaton had an unlucky BABIP which dropped from .345 to .329 last season.

If Eaton can turn around his BABIP like FanGraphs are projecting, then we can expect a slight uptick in Eaton’s batting average.