The #Nats have agreed to terms with INF Stephen Drew. https://t.co/0RcbLpCu6H pic.twitter.com/eO6T6cXViz

The Nationals added some much needed Major League depth by signing Stephen Drew to a reported one-year deal for $3.5 million with a $1.2 million incentive package which is now official as of 2:00pm ET. Drew was the star of the Nationals 2016 bench and was on a one-year deal last year. Scott Boras shopped Drew around as a starter, but there appeared to be no takers. If Drew at least meets his full incentives package he will earn $4.7 million which is fairly close to what Danny Espinosa will earn as a starter this year as Espinosa is set to earn $5.425 million with the Angels.

The Nationals 40-man roster is now at 38 players, and the cashflow payroll is now just under $150 million before any incentive bonuses.

Drew gives the Nationals additional flexibility in the infield as Drew can play every infield position, and could also platoon at 2nd base if Daniel Murphy has to play some 1st base.

Last season, Drew put up some impressive stats versus right-handed pitchers with a .910 OPS, however he struggled in his extremely small sample size against lefty pitchers which could limit him to a bench and platoon role. Drew had three pinch-hit home runs during the regular season tying him for the fifth most in the Majors with teammate Chris Heisey who actually finished with four pinch-hit home runs with the one he had in the playoffs.

Drew was striken with a case of vertigo which limited his games played during the 2016 season, and that issue was one of the major negatives about Stephen Drew. 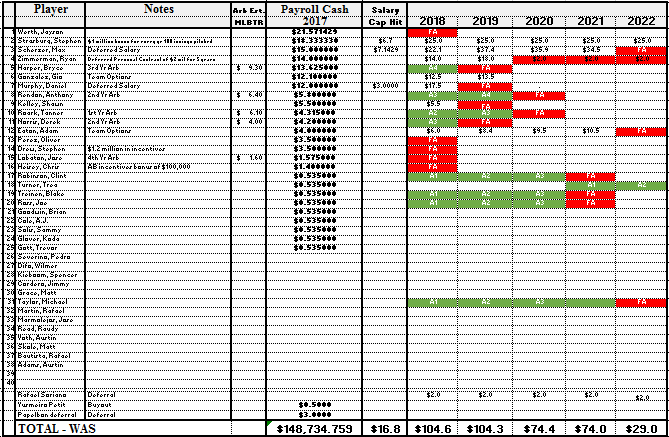 The 2017 Nationals bench will include Stephen Drew, Chris Heisey, the back-up catcher and a pick ’em of two players from the group of Brian Goodwin, Michael Taylor, Wilmer Difo, and Clint Robinson if no other player is acquired or emerges during spring training.

This entry was posted in Analysis, Drew. Bookmark the permalink.
← Previous Article | Next Article →