A fun night at the #Nats #HotStove! pic.twitter.com/uxBddl4v2m

While I enjoy hearing all of the changes coming to Nats Park and getting a sneak peek at some of the giveaways, the second half of the Hot Stove event is always my favorite. The second half is the Rizzo half. Admittedly, I would sit around and listen to Rizzo narrate paint drying, but … that’s a story for a different time. Hearing Rizzo talk about baseball and the State of the Nats is definitely the highlight of my offseason.

This year started off with FP Santangelo asking Rizzo a few prepared questions, while peppering in his own thoughts, before it was opened up to the audience. It ended up as a good mix of both, and I liked the addition of FP.

Of course this was a big topic, and FP addressed it with Rizzo right out of the gate. Rizzo said not to rule out any late deals, but also indicated that the best of the best are gone, so in-house is a huge focus. FP asked if this was going to be a competition in Spring Training, and Rizzo said it most definitely was. Rizzo also pointed out how good of a bullpen we had last year, and how he still thinks it’s pretty awesome. “We had the number 2 bullpen in all of baseball. I think we’re a top 10 now.” Rizzo doesn’t seem worried, and thinks someone in-house will step up.

This. This right here is why I love Rizzo. FP mentioned the “window to win” concept that pretty much the entire baseball world is talking about in terms of the Nats ability to win a World Series title. Rizzo said “we have the ingredients to win,” but also indicated that he doesn’t entirely buy this whole “window” concept. “We always have a 1, 3, and 5 year plan in place.” Rizzo is always working to win a World Series right now, but also keeps an eye to the future to assure we remain competitive down the road. Praise hands emoji! I don’t want to end up like the Phillies or Braves and make a huge push, maybe win, and then just fall apart. It looks pretty awful to be either of those teams right now. This leads us to…

This trade came up more than once – the evening started off with FP asking Rizzo about Eaton, and later a question was asked by someone in the audience about trading Lucas Giolito. Generally Nats fans are upset that Rizzo holds on to prospects, but many of them sure didn’t like Rizzo trading a handful of them away for Eaton (the guy who asked this question was definitely not thrilled that Giolito was gone). Rizzo said “we dealt from our depth,” and indicated that there were guys down on the farm that the team feels are as good as, or better than, Giolito. He also said “we should know our players better than the White Sox know our players.” I’m… just going to leave that quote right there and yall can do what you want with it. He did spend time dazzling us with some of Eaton’s stats (which I must admit are amazingly sexy), and said he was hopeful that Eaton is the player that he and his staff think he is. He also said that Eaton “is going to be a fan favorite… he plays 100 mph with his hair on fire.” In terms of batting order, he said “that’s a Dusty Baker decision, but I’d go Eaton-Turner,” indicating that he would break up the lefties in the batting order.

Other Odds and Ends

Someone asked about the whole mess with MASN and Peter Angelos, and of course Rizzo wouldn’t comment on that. He stated that after really getting to know Dusty over the course of the season, “he’s been under sold… my impression of him is he’s better than advertised.” Of course Trea Turner came up, and both Rizzo and FP had nothing but glowing things to say about him. Rizzo feels that Ryan Zimmerman will bounce back and be fine, and he said Stephen Strasburg was feeling great as we head towards Spring Training. Oddly absent tonight was talk on Bryce Harper. Someone finally stood up and said “I’m going to say one word. Harper.” Rizzo simply responded with “love him.” When slightly pressed, Rizzo said that Harper would for sure be with the team for the next two years, and it was left at that.

My favorite moment of the night was FP commenting on how we should all be excited that we get to watch a team that has won the division three times in the past five years, pointing out that in his career, he only got to play postseason baseball once. While he knows the ultimate goal is to win a title, he wants everyone to appreciate the success the team has had. Rizzo nodded, looked at him, and said “that’s all great. It’s bulls—t.” Rizzo’s goal is to win a World Series. Period. And, while I agree with FP and I try to soak up every moment of our guys’ successes, it’s really all about winning that ring.

Let’s start with what I consider the most interesting announcements, and then I’ll just list them in order for those who want all the details.

For many folks, the most important announcement from her was that the Lime-a-Rita bar would be replaced with a Devil’s Backbone balcony.

For other fans, the update to the WiFi would be the most important. They are adding access points into the middle of each section as well as at the ends, to try to double the WiFi access throughout the park.

In the “we want input” section, they need a name for the Nats Fan Club (something cute like “Teddy’s Cabinet” except that name wasn’t particularly well received). Please send suggestions.

New beverages:
Goose Island area to be renovated, but the beer is staying
DMV Distilleries added on the 1st and 3rd base side
Spiked Water (alcoholic water) in 4 flavors available throughout the park
Mojito bar

The following are the promo items/dates that are announced so far. Other bobbleheads and their dates will be released on Feb 8. All promos will be announced on Feb 16. 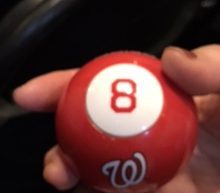 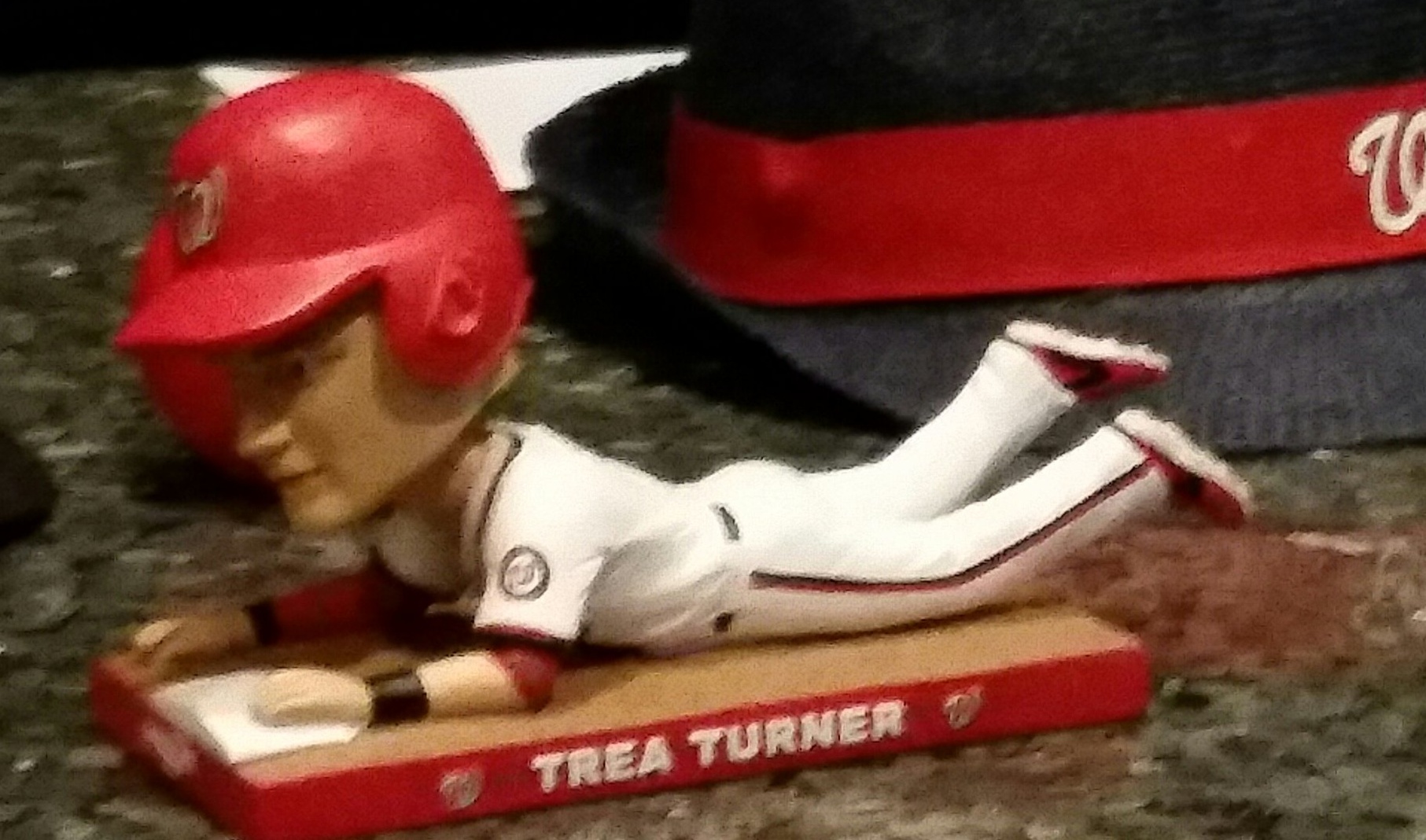 July 26 blue fedora
May 27 Star Wars Day. Based on past experiences, expect a heat wave that day.
Octoberfest Sept 29. New stein, more theme food options.
Aug. 11 90s night (instead of 80’s)
July 8: Taste the world. Embassies provides free food
July 29: Ladies night July 29 more substance, less cute. Trying to work in something around women in baseball (i.e. the team doctor).
May 28 and Sept.10: yoga. Expect it not to be hot, based on past experiences.
April 16: Easter egg roll and hunt for kids. Giveaway is a wooden egg.
There will be six college days with co-logoed hats
May 14: Mother Day brunch
Valentine’s Day contest: tell the Nats how you met at the ballpark and win custom jerseys
More runs at the ballpark, maybe a comedy fest.
Pet calendar in progress.

New ways to earn points: get a code at the END of the game at the ballpark. She specifically mentioned the players liking when people stay, so this is an additional incentive.

New ways to use points: more merchandise, more experiences, trying for a tie-in with Delta.

No gnome or Chia Pet this year

Audience request for “something for Jayson for the end of his contract” was met with (1) how do you have a going-away party for someone you don’t know is going away and (2) the problem with doing a Jayson anything is dealing with Jayson down to the last T.

New merchandise:
Sweatshirt by Jimmy Fallon (logos in the armpits so people can see it when you’re cheering)
Full line of kids clothes from infant to teen (author note: toddler clothes! Just in time for the grand-nephew!)
Swim trunks
More plus size merchandise
Starter Jacket

Miscellaneous announcements:
She promised that WPB would be ready. First workouts open to public on Feb. 19. She suggested staying at the PGA Club ($189/night when she checked) or in CityPlace (where Rizzo told her to stay) because that’s where all the restaurants are.
10 new eateries opened around Nats Park
One Pursuit will continue to be the theme (author note: good—I can wear the t-shirts for another year).

Information of interest only to Season Ticket Holders:

New this year: for “special ticket” days, you’ll be able to keep seat and still get the special tickets (and not have to sit in the “special section”).

The bars in the club are being renovated with a focus on better, faster service. To help cope with the sun there will be new blinds in the NS Club.

The SPH lounge will be more like a bank with separate areas for meetings with reps rather than the current open counter which makes it hard to have a conversation with your rep. There will be a storage area for the giveaways (see below).

The STH giveaway this year is a box covered in brown not-leather. Valerie didn’t know exactly what it was—the audience suggested “alternative leather” to much laughter.

STH will have option to buy all the giveaways on Feb. 12, so they don’t have to go to all the games to get all the stuff. (author note: Sounds as if they’ll be picking them up at the STH lounge.)

Will still have print at home tix and the black cards. However, they are moving toward the use the Ballpark app to enter the park, send tickets, buy food and earn/redeem points. All those functions should be ready on opening day. By show of hands, about 1/3 of the STH attending had the app.

One additional footnote: the party zone across the street from the ballpark is gone and is now a construction zone. I hope that means no more music drowning out the National Anthem. And one more step towards being ready for the All-Star Game in 2018.

There was so much information passed around and side conversations that we will follow-up with more information as we can get it all in writing.

This entry was posted in Analysis, RizzoForADay. Bookmark the permalink.
← Previous Article | Next Article →