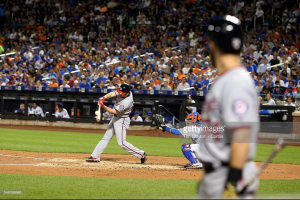 It was a year ago that Daniel Murphy’s market was going nowhere in free agency, and he instructed his agents at the Aces Agency to get a deal done before Christmas.

The only inkling that there was even interest in Murphy was a piece by Bill Ladson a week earlier ( link here) which mentioned interest in both Brandon Phillips and Daniel Murphy.

As we know, Phillips wouldn’t agree to waive his no trade clause without an extension and Rizzo wisely moved on to finalize a deal with Murphy that seemed to many to be a Plan C move. Au contraire!

Most thought Ben Zobrist was Plan A and Phillips Plan B, but some inside the Nats braintrust say that is not the case as Murphy was a target from the start. Murphy had a qualified offer attached to him, and a higher price tag earlier in the off-season.

The star of the 2015 postseason had told his agents to finalize that deal with the Nationals on a three-year deal at what appeared to be a team friendly below market deal.

Murphy was not the perfect fit at second base due to his below average defensive metrics, but his positional flexibility where he could play first base coupled with his left-handed bat and superior offensive potential made him look like a great fit upon further analysis.

Most of Mike Rizzo’s big impact free agent deals have been the ones that have needed ownership blessings and lots of cash like the deals for Jayson Werth and Max Scherzer. Rizzo has either done the big deals with Boras or the small deals for bench players like Stephen Drew, but never a Daniel Murphy type of deal before and it was transformative to the 2016 team.

For those panicking that the Nationals have not done enough this off-season, there is that reminder with Mike Rizzo and the Nationals that it isn’t over till it’s over. For all we know there is another Plan C in the works that really has the makings of a Plan A. Adam Eaton could fit that billing, and there could be more.

The bullpen and the bench still need some final Plan A – C work, and Mike Rizzo is still hard at work.

Even if there were not any other impact deals made by the Nationals, FanGraphs still believes the Nats are a first place 90 win team.

This entry was posted in Murphy. Bookmark the permalink.
← Previous Article | Next Article →