Regardless of the size of the budget, each team allocates their payroll to the different positions based on many factors.  I thought it may be instructive to look at how payroll is allocated on a percentage basis by team.

Note, I used Cot’s Baseball Contracts as the main source and I pulled the data for each team into a spreadsheet and then made some educated guesses as to which bucket each player’s salary belonged to.  There can certainly be some variations in how others would assign the buckets, but I believe that most of the questionable calls were for lower-salary players, so I was comfortable on a percentage basis.

The following is the average payroll percentage that each team spent in 2016: 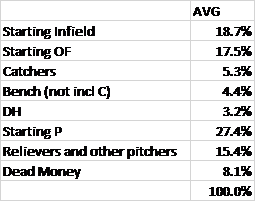 At first glance, these numbers match well with what I would have guessed, with perhaps the Reliever/Other Pitchers and Dead Money categories feeling a little high and the Bench category feeling low.

Digging into team-by-team, I then noticed that the starting player categories were generally consistent among teams, while the non-starting categories had much more variability among teams.  Here is a distribution of the categories among teams (ranked most wins to least wins): 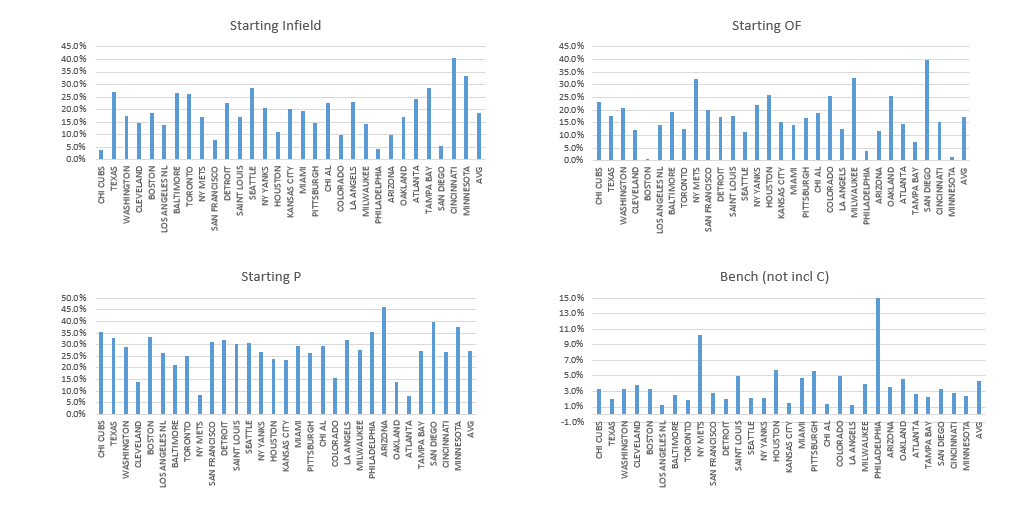 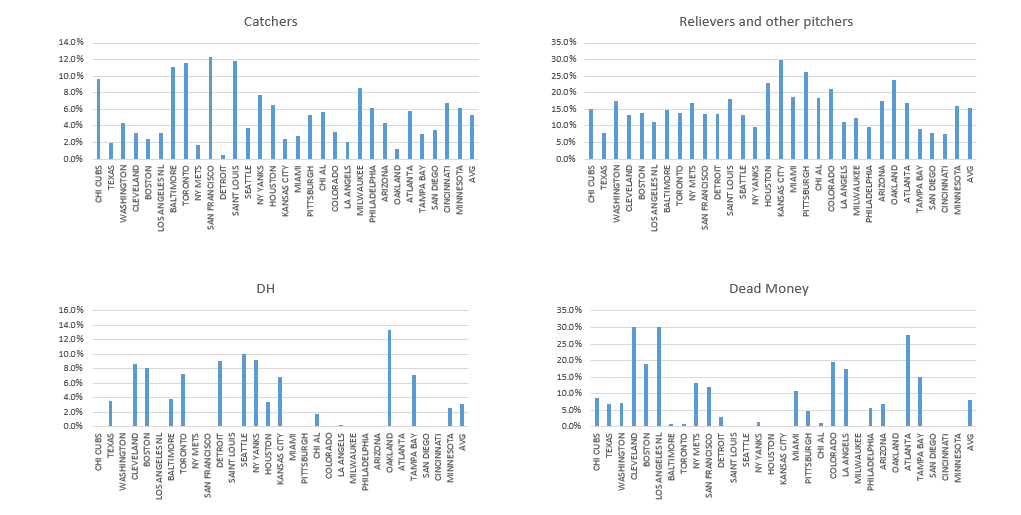 So, what makes the best teams win and the worst teams lose?

The Orioles were the only team in the Top 10 who had no Cheap Stars (ha!) and I’d argue they overperformed and are ripe for regression next year.  The Cubs (Bryant, Russell, Hendricks, and Baez) had 4 and could have had more (Schwarber, Contreras and Soler didn’t make my cut, which offsets my questionable Baez call).  Texas overperformed as their two Cheap Stars were questionable (Odor and Mazara).  The Nats had 3 with Roark, Rendon and Turner.  Miami had 4 Cheap Stars, but a few I picked were questionable (Conley and Ozuna to go with Fernandez and Yelich).

However, I was surprised to see that the best teams were more likely to have Dead Money than the worst teams.  The Top 6 teams each had at least $10MM in dead money.  One could argue that only Big Market clubs can afford to write off dead money, but the Indians managed with nearly $30MM of dead money (Swisher, Bourn, Chris Johnson, and Michael Brantley) because they had Cheap Stars ready to take their places (Bauer, Salazar, Lindor) and made some smart trades as well.   Cleveland actually underinvested in each category compared to their AL Central competitors because of the Dead Money. 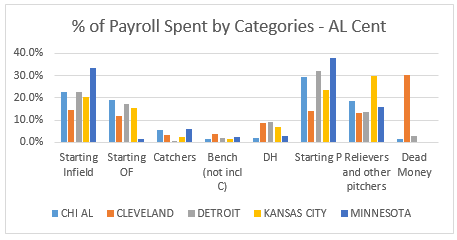 The teams with the highest paid benches – Philly (Ryan Howard, Blanco, Burriss) and the Mets (Loney, deAza, Johnson, Lagares) – both underperformed.  I would argue that those teams should have dropped their high-priced bench guys and tried to develop young players on the bench who could potentially have become Cheap Stars.  As a result, Philly underinvested in their starting position players while the Mets were lucky as they had a young talented starting rotation. 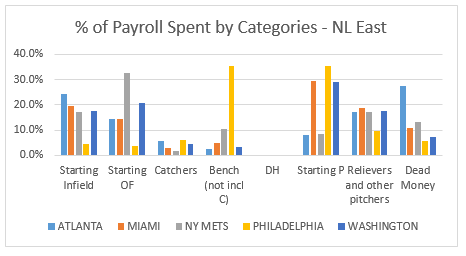 So, what is the ideal way to spend payroll and what should the Nats do for 2017?

The Nats had a distribution very comparable to league average in 2016: 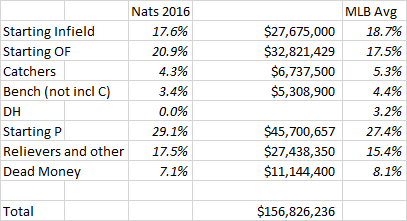 Note: You can see my source work at https://drive.google.com/file/d/0Bx3rIcR7Tac2eDJwOGVfOEdkeGs/view?usp=sharing and please feel free to share comments.  Most of this analysis was done late night, so there could easily be some errors.