There has been a new evolution in baseball closers it would seem with the multi-inning saves as well as being inserted into high leverage innings in the middle of the game where the save is not given out. The Cleveland Indians have actually used Andrew Miller in the middle innings and Cody Allen in more of a traditional closer’s role which has allowed the Indians to shutdown games. 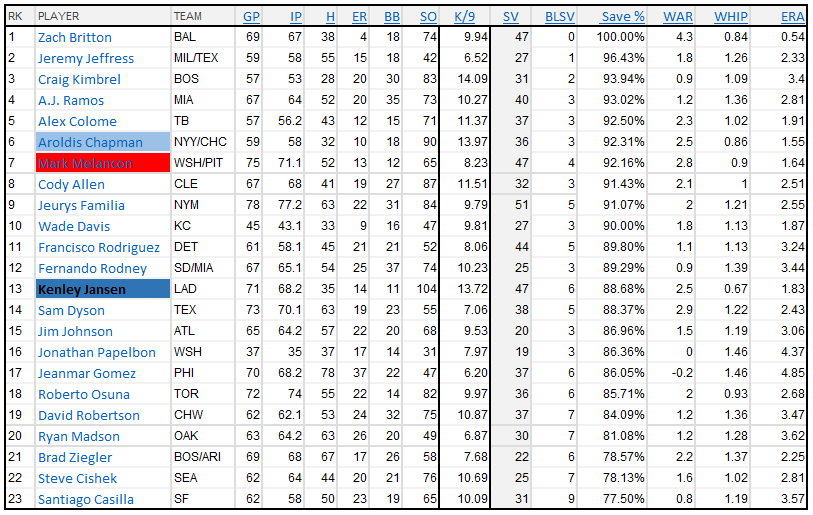 Last night it was Aroldis Chapman‘s turn to shine in the World Series and show everyone that he could top what Andrew Miller had been doing, and Chapman went 2 2/3 innings of scoreless baseball to secure the win for the Cubs.

This new hybrid closer thingie is becoming en vogue now, and we saw Kenley Jansen do it in the NLDS against the Nationals where he also went multiple innings. The question is that with a traditional bullpen, is this really necessary to have your closer take on multiple innings and will it stop when a big-name closer falters?

Mark Melancon had three relief appearances of greater than 1.0 inning in 2016. Is that significant? Kenley Jansen had six. Aroldis Chapman had four. Melancon had more appearances and more innings pitched during the season than both Chapman and Jansen. All three relievers are set to be free agents this off-season, and there is much debate on who is more valuable.

If you go by Save % it is almost a tie between Chapman and Melancon who are separated by .0015, and both are ahead of Jansen by over 3%.  Melancon is a much different type of pitcher than Chapman and Jansen. Melancon won’t ‘wow’ you with his fastball or dazzle you with his strikeout rate, but statistically speaking, Melancon is one of the best closers in the game.

One of our sources has told us that Melancon is Washington Nationals general manager Mike Rizzo’s number one priority to try to extend Melancon before he enters free agency. Technically, Melancon still remains property of the Washington Nationals, and they are the only team who can negotiate with him. Off the record, some agents will check around to gauge value, and with three top closers on the market at the same time it will be an interesting situation. The Cubs need Chapman, the Dodgers need Jansen and the Nats need Melancon.

The San Francisco Giants could be the biggest player in the free agent market in search of a closer this off-season as they were the worst performer in bullpen relief of the play-off teams, but there is a serious supply/demand issue here. There are not enough quality closers available, and Drew Storen and pitchers like him are not in the elite category to fill a void.

The next ‘best’ name on that list of free agent closers is probably Fernando Rodney if his team option isn’t exercised, but Rodney struggled (5.89 ERA) with the Marlins and turns 40-years-old in March. Rodney’s team option is only $2 million which could make him a sign and trade candidate. Next is Francisco Rodriguez who had a decent year with the Tigers, and after him would be Jonathan Papelbon if a team can deal with his issues in pitching consecutive days. The Braves have already locked up Jim Johnson so he is off the table. Brad Ziegler is set to be a Free Agent, but his success rate fell below 80%.

This perhaps makes Wade Davis a very attractive trade chip for the Royals, and Alex Colome and Brad Boxberger for the Rays.

The other complication for Kenley Jansen is that he will almost certainly be tagged with a Qualifying Offer which will affect his desirability by some teams.

Looking at this list, you do not want to enter the season without a proven closer, and relying on free agency or a trade is going to be difficult to upgrade.