For some, winning 3 division titles in five years is good enough, but for many, the Nats need to make it past the Elite 8 into the Final 4 and beyond to fully satisfy them. The Nats are in a familiar position similar as they were entering the 5th game of 2012, and this time is different because the Nationals have post-season veterans throughout the roster.

This 2016 version of the Washington Nationals is led by a familiar face in Jayson Werth who has proven once again that he plays at a different level in the post-season, and the team’s 2016 acquisition of Daniel Murphy has paid dividends all season as well as in this NLDS.

The starting position players and bullpen overall have been great, and the part that has not carried its weight is the starting rotation. That can all change tomorrow as Max Scherzer has the opportunity to be the ace that the Nationals invested $210 million in for just this day. The encouraging news for Scherzer is that he will be pitching on 5 full days of rest, and this season at Nationals Park on 5 full days of rest, Scherzer has pitched to a 2.33 ERA.

Tomorrow, Dusty Baker will get to pencil in his “A” team sans Wilson Ramos. Baker has four starters batting .333 and over. Baker has five starters with OBPs of .386 and over. Tomorrow is the day for the Nationals to excel in all facets of the game beginning with starting pitching, offense, defense, and baserunning.

At the end of the game tomorrow, it must end in a classic embrace between Jayson Werth and Dusty Baker. That is how it has to be. It feels like destiny. 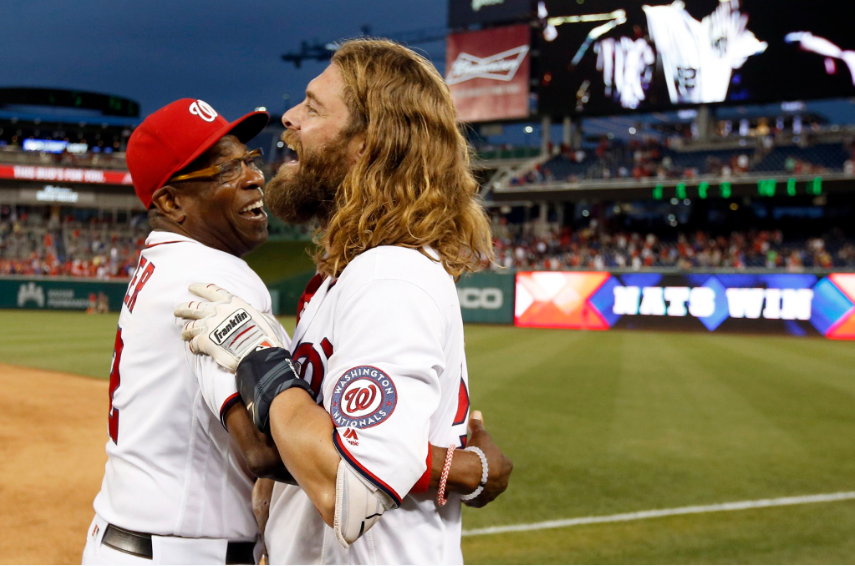 If we see this picture tomorrow, it is good news!