It should be no surprise that Ryan Zimmerman is going back to the DL. The choice to replace Zimmerman’s spot on the active roster is Brian Goodwin who had stepped up his game this year at Triple-A Syracuse. Goodwin was a former 1st round pick in 2011 as a compensation pick for Adam Dunn signing with the White Sox. Thoughts yesterday were certainly pointed in the direction that the Nats would not play a 5th game short today on the bench, “They are contemplating. Should have had Goodwin in the clubhouse …” — Steve M. http://disq.us/p/1aomu58 Zimmerman’s DL stint will be retroactive to August 1st.

In other news, Bryce Harper has reportedly purchased a $2.7 million home in a swanky gated community outside of Las Vegas that we expect will be Bryce’s off-season home for himself and his fiancée Kayla Varner. You can view the home here. 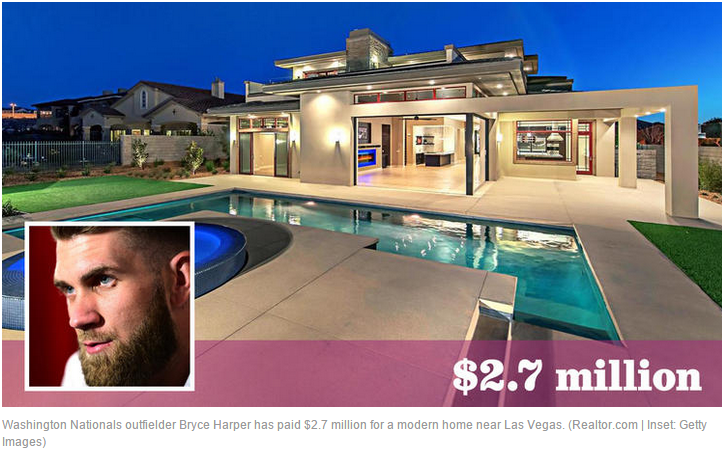 In line-up news, Trea Turner is back to 2nd base in Dusty Baker‘s ‘speed’ line-up with Ben Revere back in center field, and Daniel Murphy at 1st base.

Today’s starters are Stephen Strasburg and Matt Cain. It was Cain last week against the Nats who took advantage of his 5 innings on the mound to shutdown the Nats who had no Daniel Murphy or Jayson Werth in the line-up.  Prior to Matt Moore‘s acquisition, the rumors were that Moore would take either Cain or Jake Peavy‘s spot in the Giants’ rotation, and as it turned out, it was Cain who remained in the rotation with Peavy going to the bullpen.

Line-ups (subject to change without notice):

Screenshot from MLB.com of match-ups