By almost any SABR stat or traditional statistical measure, Wilson Ramos has been the top catcher in the Major Leagues this season, be it WPA or BA, and Ramos might just owe much of this success to a visionary (pun intended) in his field named Keith Smithson.

Rewind back to early Spring Training, Wilson Ramos during his physical, failed part of his vision test administered by team eye doctor Keith Smithson. Luckily for Ramos, the solution was easy, he could get his vision correction from LASIK (laser-assisted-in-situ keratomileusis) surgery and see better than before. The surgery was a success and the results were noticeable quickly by Ramos.

We contacted Dr. Smithson who I have known for several years and he could not speak on the team’s behalf without permission from the Nationals media relations department, and he forwarded out request to Amanda Comak Senior Director, Baseball Communications, and she never responded back to multiple requests. While Dr. Smithson wanted to educate us on player’s vision, we understand that he could not. We can tell you that it was Dr. Smithson who got Cristian Guzman seeing so well that he went from a player rumored to being released (DFA) to a player making the All Star team in 2008. Guzman went from a .219 hitter to an elite .328 batting average. Smithson was also the eye doctor who saw Bryce Harper when he was having vision issues in his first year with the Hagerstown Suns.

Ramos had this to say on his vision, “That helps me….everything is clear right now. After the surgery, I can read the pitch better, I can see the ball better, recognize pitches really well. I’m excited for that. Last year [was] a bad year offensively, but this year, this season I worked a lot [toward] trying to being better this year and doing well. I wanna keep working and try to stay like that for the rest of the season.”

Ramos last year hit just .229/.258/.358/.616 in 2015, which was a step down from his .263/.305/.418/.723 career slash line, and while he was the best defensive catcher in the NL and a Gold Glove finalist, the Nats were rumored multiple times to be looking at Jonathan Lucroy as a trade target. Ramos stepped up his workouts in the off-season and had been posting photos and videos of his workouts. Ramos came into Spring Training in the BSOHL (best shape of his life) except for his vision which since the LASIK procedure has turned him into the offensive weapon he was always considered in the Twins organization as a Top Prospect.

This year Ramos has been in the Top 3 hitters in the Nats line-up and only 2nd to Daniel Murphy in batting average, and while hitting .350 overall, Ramos has been clutch in RISP situations batting .393. Ramos has excelled in High Leverage spots this season .533/.563/.668/1.229.

While Ramos is scheduled to be a Free Agent after the season, we are hopeful that Mike Rizzo can find a way for the Nats to extend him for several years. Ramos has caught 3 no-hitters and was Scherzer’s catcher last week for the 20K performance making Ramos the only catcher in history with those accomplishments. Ramos recently changed agencies from Relativity Sports to Octagon Baseball, and will be a top Free Agent if Rizzo cannot extend him.

Dusty Baker as noted by us over the weekend and followed up by others in the media caught 3 games in a 24 hour period without any response as to why Dusty would push his starting catcher that hard. Dusty certainly remembers the days of Johnny Bench doing that, but how many catchers would go from catching both ends of a doubleheader to catching a 1:35pm day game the next day? We couldn’t find any other instances in the BBRef database.

Also the third game in 24 hours started by Wilson Ramos.

We got to speak to Mickey Myers who is a retired catcher from the Seattle Mariners system who has worked out with Ramos in the past. We asked Myers for his thoughts on catching so many innings in a 24 hour period.

“To put it in perspective, catching one game is tough, extra innings can wipe you out, but going 3 games so close together definitely wears you down and your legs are heavy and you don’t seem to be the same for a while,” Myers said. “Hopefully there will be no long-term effects since he had an off day today. I’m shocked they went back-to-back [in the doubleheader] and then the 3rd game doesn’t make sense.”

Ramos wants to be an iron man behind the plate. Last year he played in a career high 128 games and on May 10th of 2015, Ramos was batting .327 and then  his offensive season spiraled down. Ramos seemed to be more focused on his defense and proving he could stay healthy a full year after injury plagued seasons for a few years before that limited his playing time. As Ramos’ innings piled up last year, his offensive stats suffered. Ramos suffered a knee injury along with hamstring problems in the past which is why Myers thought “you need to go easier on any catcher who has had leg injuries like that.”

The position of catcher is the most physically demanding position on the field Myers believes, and thinks the world of Ramos and hopes he builds on this year’s success. Ramos usually wants to talk about his defense, and now he can talk with pride about his hitting.

“I’m very excited right now because I’m feeling great at the plate, and I’m helping the team. That’s my job, and I’m happy to do it,” Ramos said.

The National League has the best catchers in baseball with Buster Posey and Yadier Molina, but neither of them got to learn under Ivan Rodriguez or Joe Mauer like Ramos did. Some believe Ramos is elite in calling a game, and if he could just stay above average with the bat he will vault to the level of the very best catchers in the game. 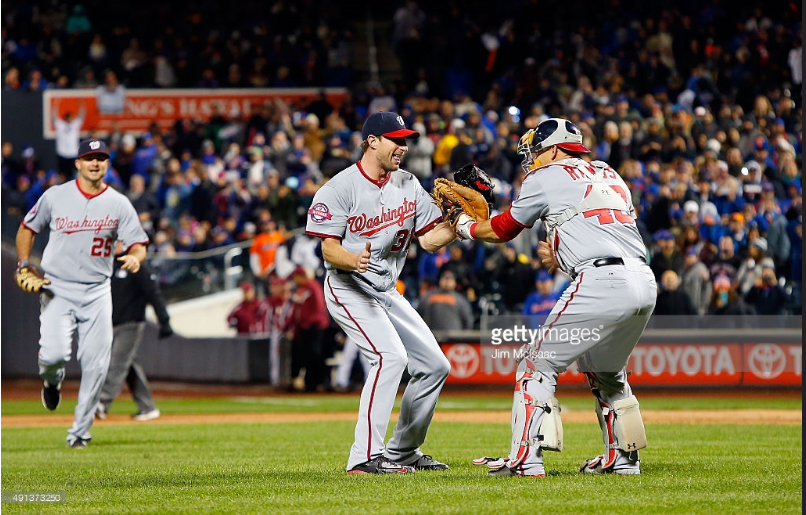 This entry was posted in Analysis, Dusty, Ramos. Bookmark the permalink.
← Previous Article | Next Article →