Time Warp: The Spectacle of Bryce Harper and Brian Knight 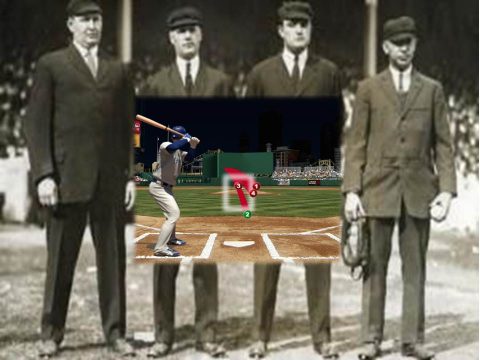 In the odd juxtaposition between reality and baseball, arguably the biggest name in the sport [Bryce Harper] was nominally suspended on the very day his franchise was providing him an honor. If this feels like a recovered draft of a discarded Rod Serling script for the “Twilight Zone” it is because only the late master writer could envision such organized silliness. The irony is not in the timing of the matter itself. Rather it’s the context of its place within a tableau of even grander goofiness. Baseball is currently in a warped dimension between past and future operating systems. More bizarre scenarios are on tap for quite some time.

The old system in baseball was beautiful not for its accuracy or reliability. It was beautiful in its flawed simplicity based upon one unshakable principle: The umpire was inviolate. Knighted with the power of Imprimatur the umpires declared reality…and that was that. Whether it was correct or not was irrelevant. Reality was what the umpire said it was. With those thunderbolts the four Magnificents would take the field and suspend the normal rules of gravity, time, and space. It was a perfect system design for the age of the telegraph.

This system worked for over 100 years because the simplicity and totality of it was such that everyone near and far could understand it. There are arguments that this actually added to the appeal of the game. The blown call was a matter of ongoing discussion over countless cups of coffee the following day. The interest in the game was thereby extended well past the last pitch of the night. Regardless, the system worked on many levels. The most important facet being that the rhythm of the game was preserved. It did cost St. Louis a championship once. The rest of the world laments such indignity for the self-proclaimed “Best Fans in Baseball.”

Enter into this the preposition that such egregious inaccuracy can no longer be tolerated. Somewhere in the distance Pandora surely snickered.  Video replay of various calls was introduced to place accuracy over immediacy.  That’s not a step, that’s a leap.  It shuffled the priority of the sport’s values.  The public’s sense of fairness was fed a bone. But the devil is intrinsically in the details.  The replay system is Byzantine in design. It’s woefully inefficient, often inaccurate, and completely unpredictable. A design-by-committee, the replay works are equal parts theater and safety net for the formerly omnipotent umpires. The reviews are conducted by fraternal brothers, themselves on the line. There are alliances and relationships to be protected. But, most importantly, the agrarian-rooted system design has been forever altered: Umpires are, indeed, fallible. Well, that is until they put on the padding for home plate duties. With this ersatz shield of invincibility the umpire steps back into time.

In our own time, of course, technology has moved on to new and unimagined places. On many broadcasts one can watch the pitch versus the strike zone in real time. It matters not. Only the umpire’s version of reality counts. Meanwhile, the other three umpires are merely mortal, subject to review. This hybrid combination is untenable. The technology to project the strike zone is superior to the video replay. It also does not need a trained interpreter. The heretofore infallible umpire behind the plate is exposed in ways not imagined to his predecessors. The question is not IF baseball will institute the robot strike zone, or even WHEN. This will happen sooner than later. Once accuracy became more valued than expediency the days of living with inherently inaccurate balls and strikes determinations became numbered.  The real question is; how convoluted can baseball make such a seemingly straightforward transition? The answer is “Very.” The transition for the umpires from Thunder Beings to glorified Traffic Signalmen will not be pretty if the early stages of it are any indication.

Add to this mess the reactionary rules that have been instituted over the past few years. A catcher breaks his leg in a home plate collision: Let us create a rule. A take-out slide at second base results in an injury: Let us create a rule. We await the next serious injury and its inevitable legislative outcome. There are a few things assured: It will be complicated, subject to significant leeway in interpretation, and will result in long video delays.

From this cocktail emerges the spectacle of Bryce Harper and Brian Knight during Monday’s game. We’ve all seen the footage numerous times. The basic reason Harper was thrown out had nothing to do with anything said from the dugout. Even when blessed with superhuman powers when determining what is real, umpires don’t have the hearing to pick out one voice from many over that distance. Bryce’s transgression was that he had the temerity to not be demonstrably grateful for Knight’s benevolence in the fourth inning. “I let him stay in the game earlier.” For this magnanimity the young star’s lips should forever be on his ring.  Knight was equal parts vengeful and incredulous.  It was a vestige of a former age when an umpire’s absolute power was unassailable. Within moments the game was over. Returned to civilian status the umpire was addressed in the familiar vulgar Bronx salute by one of the game’s brightest lights for all to see.  An unfiltered window into the now viewing the past was thrown open.  Knight turned away visibly dazed as he looked down and out into an uncertain, but rapidly approaching future state.   It was a tiny, but revealing snippet of the overall shift as baseball clumsily and unhurriedly  wrestles its way out of the telegraph age.

This entry was posted in Analysis, Umpires and tagged Bryce Harper. Bookmark the permalink.
← Previous Article | Next Article →