With some great interviews we have transcribed from MLB Network Radio, and some post-game comments from Tanner Roark and Joe Maddon it might put some clarity on what Joe Maddon’s strategy was and how he exploited Ryan Zimmerman batting behind Bryce Harper. The NL Manager of the Year opens up on small sample sizes, trends, and the Nats line-up. For those who don’t remember, on Sunday, Maddon’s Cubs pitchers walked Bryce Harper 6 times and he could have walked a 7th time if he wasn’t Hit By a Pitch. Twice Bryce Harper was intentionally walked twice to load the bases and first base wasn’t open. This could have backfired on Maddon, but afterwards he was excited that it worked. 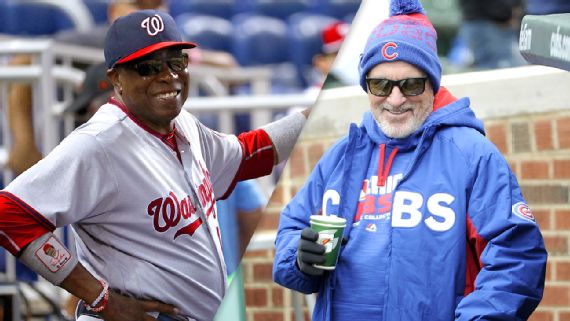 Dusty Baker and Joe Maddon, who guide two of the best teams in the NL, have the respect of their players. Getty Images

“If the other guy gets you, that’s fine. You have no problem with that,” Joe Maddon said. “I know [Harper] hasn’t been as hot as he can be coming into this series, but you don’t want him to get hot. We did what we had to do today, and it happened to work.”

“The best way I could put it, I did not do anything to them,” Joe Maddon said Monday as he was accused of playing ‘scared’ by Tanner Roark. The strategy resulted in Ryan Zimmerman stranding 14 runners as the Cubs won 4-3 in 13 innings. Maddon said the intent “was just the strategy of the game, based on how they built their group. That’s all it came down to. It’s nothing I did. We had to react to the moment. We tried to pick our best spots, based on our abilities versus theirs. That’s how it played out. It happens every day. It just happened more often in (Sunday’s) game.”

Also, a Q&A on line-up construction with the AL Manager of the Year Jeff Banister of the Texas Rangers follows this Q&A with Joe Maddon this week as he delved further into his thinking of using trends and small sample sizes versus a broader look.

Question: Joe [Maddon], what was your approach with Bryce Harper and Ryan Zimmerman batting behind him?

Answer from Joe Maddon: “That’s just a function of the batting order. You’re not going to pitch to [Bryce Harper] in those moments if you have the alternatives.”

Question: Tanner Roark said your team pitched scared. Ryan Zimmerman has been a really good player in this league and you know this as well as I do. How much does that change if Zim was hitting like he was 3 or 4 years ago and hitting behind Harper in that line-up?

Answer from Joe Maddon: “It just depends. We talk about sabermetrics all the time and everyone talks about large sample sizes. I like trends. I like the small sample size last week playing them and it was the right thing to do. You are always trying to build in trends with these numbers. These are human beings with a heartbeat and it was last week…It’s what is trending at that time.”

This is Jeff Banister who changes up line-ups to who is pitching against him and his own trends on his own players to how they are playing. He doesn’t mind moving around his line-up and it has worked to get his team into a 20-15 record.

Question:  When you’re trying to decide the leadoff guy, and DeShields did lead off [last year], give me your thoughts on when you change up the lineup.  How do you go about it?

Answer from Jeff Banister: Well…when Delino was inserted last year, we looked at not the batting average as much as the on-base and the running ability to be able to create runs for us.  That’s one of the things.  When I look at the middle part of our lineup, the power part of our lineup, the guys who can hit it out of the ballpark but also drive the ball in the gaps, its just one of those… and the overall flyball mentality from some of those guys, too.

If we can get a guy on and  get him over, a guy that might steal a bag and get to third, then we get a sac fly.  So an early score for us.  Those kind of situations you’re always looking to create.  And that production fell off for us this year and some of the challenges for Delino, and we were a little stagnant at the top as far as scoring runs.

We looked at Odor and not necessarily the on-base but the quick hit for a home run.  We know that this guy likes to swing early in the count.  We know that he has some home run ability to him, but also he still possesses some speed … it’s a unique combination of not the high on base because of walks and things like that but just still creating quick runs for us and adding that spark for the top of the lineup.

So that’s how we look at it when we decide to make the change. That was the decision, because we like Rudy down there also in the lower tier because he’s such a force of add-on runs and create runs when the top of the lineup’s not doing things, that we still have some potential, some power potential, and run scoring from the bottom part of the lineup as well.

Question:  You had him in quite a few different spots.  You mentioned you had him at the bottom.  Time was spent in the 7 hole spot and then he gets an opportunity to lead off. You make that jump there, and last night he got second.  Is there a spot where you look at him and say this is probably the best spot for him and you? And do you worry about moving guys around in the lineup? Do you like the idea of having guys settle in one spot?

Answer from Jeff Banister: Well, that’s a great debate.  Traditionally, when you think about baseball players, they love routine.  They love knowing where they can settle in.  But also I think that’s manufactured from the outside and it gets talked about more and guys are supposed to feel good and settle in in one spot.

But I think if guys are comfortable and they love being in uniform and they love having a bat in their hand, they just want to be in the lineup somewhere.  There’s notoriety that goes with being first or third or fourth and they get recognition for that.  The analytic thought will tell you that your better hitters get that extra at bat, and I believe in that also.  But I also believe that hitters – when we, not condition them but help them learn that being in the lineup is most important and how they are so interconnected with each other and how they feed off each other, then look…where you hit in the lineup is as important as the guy hitting in front of you and the guy hitting behind you also.  So  we give them counsel on the idea that this Is … we’d love to stand everyone in and be perfect every time.

But this is a different pitcher we are facing every night too so we got to strike a lineup to beat the starter we are going to face.  So these guys are comfortable with the idea that from time to time we are going to move some things around and they are okay with it. Look, we’ve got a different lineup today than we had yesterday.

Question:  Is it easier these days to do [lineup changes] than maybe a couple of years ago?

Answer from Jeff Banister:   I think when you give these guys the information and you show them just how it works and why—you give them the why.  They want to know.  We live in a world of information and truth and in baseball we got the analytic side of it so you can give them the production truth, if you will, on how it looks, how it works, and you give them the why.  And you don’t just go, well that’s why I got you there.  No, we sit down with them and talk about it.  They understand it.  When they can see that vision they can believe it, and then they just go out and roll.

Banister has started to even move Ian Desmond around in their line-up with success. Desi came through in the 2-hole. Who knew.

Each manager has their own line-up construction formula that works, and what is most interesting is how Joe Maddon approaches the other team’s line-up to his advantage.

Besides swapping Ben Revere for Michael Taylor, and Saturday when Daniel Murphy was sick and Lobaton caught for Gio Gonzalez, Dusty Baker has been 1. Taylor/Revere 2. Rendon 3. Harper 4. Zimmerman 5. Murphy 6. Werth 7. Ramos 8. Espinosa  It had become a rubber stamp line-up regardless of how a player was performing. Joe Maddon took advantage of that.