Official: Nats sign Strasburg to a 7 year extension with opt-outs

It’s official! Stephen Strasburg will be a Washington National for the foreseeable future. Timing is not always everything. How strange to leak the news of a Stephen Strasburg extension during the middle innings of last night’s game? This is huge news on so many levels, and mostly because this was shocking news as most believed Strasburg would never stay in Washington.

This contract extension for Strasburg also once again destroys stereotypes like the “Lerners are cheap”, the on-going narrative “players don’t want to remain with the Nationals”, the silly geographic myths “he wants to play close to his home”, the perpetuated defamatory words “toxic clubhouse”, and the most popular one, “Boras doesn’t give hometown discounts or allow his players to extend contracts”. That is a lot of horse hockey to refute.

The #Nats have agreed to a contract extension with RHP Stephen Strasburg: https://t.co/LVgFMEyXL4. pic.twitter.com/ispvuORloG

From Nationals owner Theodore “Ted” Lerner, “Ensuring that Stephen [Strasburg] will remain a part of our organization for years to come is a proud moment for our entire family. We are very fond of Stephen and his entire family, and we’ve thought very highly of them since he became such an integral part of our organization almost seven years ago. We’re honored that he feels the same way about the Washington Nationals, and very happy to keep him pitching in the nation’s capital.”

Here’s the Strasburg deal per the leaks and rumors. It is a 7 year deal for $175 million which works out to a straight line average of $25 million a year. There are opt-outs after year 3 and year 4. There are $1 million a year incentives for any season that Strasburg throws 180.0 innings or greater. The rumors say that there is not any trade limitations, but there is deferred salary to keep it like a Scherzer deal at $15 million a year. Keep in mind that Jordan Zimmermann‘s deal was for $22 million a year.

“I am delighted to ensure that Stephen is going to remain an important part of the Washington Nationals,” Nationals’ GM Mike Rizzo said. “From the moment he was drafted, Stephen has been far more than just a pitcher for our organization, and his talent is transcendent; the numbers speak for themselves. Needless to say I am thrilled we’ll continue to have him as a part of our family on the field and in the community, and looking forward to seeing him on the mound for us every five days for the foreseeable future.”

First off, the Lerners by signing Strasburg to this extension alongside Max Scherzer‘s $210 million deal have now written 2 of the 6 largest pitcher’s contracts in history. Strasburg’s deal will add to the payroll projected into next season which should take it back over the $160 million mark. Details to follow. That would just leave Jonathan Papelbon and Wilson Ramos as the only significant players due for Free Agency after this season.

“Growing up in Southern California, San Diego, all my life and stuff, the East Coast is a little bit of a change,” Strasburg said. “But the city of D.C. has been great to me and my family. It has really grown on us. We’re very comfortable here.”

This Strasburg extension also appears to be a large hometown discount as he was already rumored to be the biggest name on the off-season’s free agent market where demand/supply could have pushed his asking price north of what Zack Greinke received which was $34.4 million a year for 6 years ($206.5 million total). 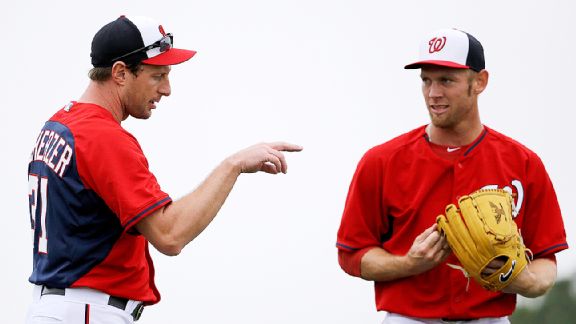 So what does this all mean for Lucas Giolito and Austin Voth as the upcoming starters, and pitchers like Reynaldo Lopez as well as 40 man roster starters like A.J. Cole and Taylor Jordan. The answer is not simple, and the good news is this group of starters except for Gio Gonzalez appear to be tied to the Nats for at least the next 3 years, and this could allow Mike Rizzo to make a deadline trade for a reliever from the group he has now or even an off-season trade in the Winter.

Gio Gonzalez’s team control is for 2 years beyond this year if the team picks up his $12 million option which they almost certainly would do. If the Nats pick up Gio’s 2017 team option and he pitches at least 180 inning in 2017, then a $12 million vesting option would kick-in for 2018. Gio could then become an unrestricted free agent after the 2018 season.

The Nationals at some point will need to move a starting pitcher as Lucas Giolito makes his way into this Washington Nationals rotation.

It seems fairly obvious that one of those pitchers will be traded. Gio Gonzalez’s name has come up a few times in the off-season in trade rumors and most prevalently attached to the Miami Marlins.

The Nationals now have Ace pitching depth to be envied by almost all teams.

The Nationals have a scheduled doubleheader on Saturday. It just so happens that Lucas Giolito was stretched out to his longest outing of the season at 6.0 innings last night, and lines up perfectly to start on regular rest on Saturday. Of note, Giolito is not currently on the 40 man roster.