You can’t make this stuff up. Bryce Harper gets tossed from the game and as that is sorted out Clint Robinson hits a walk-off. Clint Robinson thought it was the 8th inning, and didn’t realize it was actually the 9th inning until everyone came out of the dugout to celebrate his walk-off. It was the first walk-off HR of Robinson’s career, and his 6th HR to break a tie in a game out of his 12 career HRs which is a 50% rate. That’s how you end a losing streak, and CRob saves the bullpen. Shawn Kelley throws 1 pitch for the win.

The big blast that got the Nats back into the game was from Daniel “Hits” Murphy with a 2 run HR as the Nats were behind 4-1. Another huge play in the game was in the 8th when Stephen Strasburg walked Miguel Cabrera on 4 pitches and Dusty Baker went to the bullpen to bring in Blake Treinen who gave up a bloop single. With men on 2nd and 1st, Treinen spiked a ball in the dirt that skidded away from Wilson Ramos and Cabrera took off for 3rd and Ramos got the ball to Rendon for the tag. Cabrera was called out on the field and Brad Ausmus challenged the play. It looked like Cabrera was safe, but the call stood. The bullpen stepped up and threw 2 scoreless to set-up the 4-4 game for the bottom of the 9th.

In the bottom of the 9th, Danny Espinosa led off and was called out on a borderline strike 3 and then Bryce Harper was ejected for yelling from the dugout. Bryce came onto the field for the walk-off celebration at homeplate and was caught on camera yelling an expletive at the homeplate ump Brian Knight which could lead to a suspension or a fine, and could be a hit to Bryce’s reputation.

Here is the chart on the Espinosa called Strike 3 that led to Bryce’s suspension: 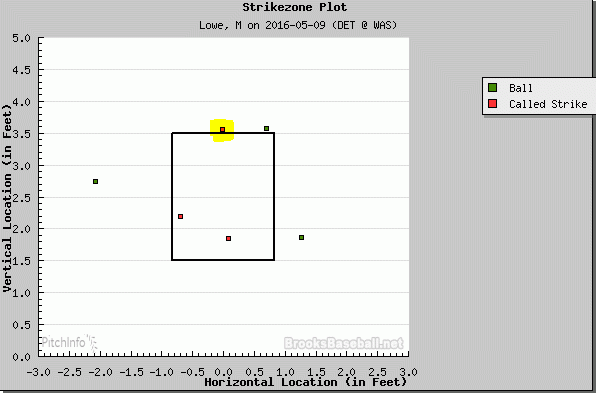 On the big news of the night, we heard mid-game that Stephen Strasburg has agreed to a 7 year extension with the Nationals with an opt-out and bonuses, and that is celebrated with a walk-off in a Strasburg start.

Strasburg has a "rolling" opt out, after years 3 and 4

Stephen Strasburg can earn extra $1M per year if he pitches 180 IP, can earn in $7M in performance bonuses and rolling buyouts after 3,4 yrs

This entry was posted in CRob, Harper, Recap, Strasburg. Bookmark the permalink.
← Previous Article | Next Article →