Game #17 with lineup changes and which Roark will we see?: Game Thread

Today’s 1:05pm start features Phil Hughes and Tanner Roark as starting pitchers and Daniel Murphy gets a day off for the first time this year and Michael Taylor gets another observation day. Chris Heisey will play CF and lead-off in this game, and Stephen Drew will get the start at 2nd base.

The Nats will face righty Phil Hughes who was a 1st round draft pick of the NY Yankees in 2004 and was a top prospect. In 2010, Hughes made the All Star team and finished that season with a very pedestrian 4.19 ERA. Hughes will always be that pitcher who the Yankees thought was their answer and became a pitcher who they had a chance to “sell high” on and he never did become their #1. Hughes finished his Yankees career with a 4.53 ERA over 182 games.
Phil Hughes throws the 4-seam and 2-seam fastball at 92mph, a cutter at 88mph, a curveball, and will mix in an occasional changeup and knuckle curve.

Here are the Nats stats for those who have faced Phil Hughes:

There are no Twins position players who have faced Roark before in a regular season game. 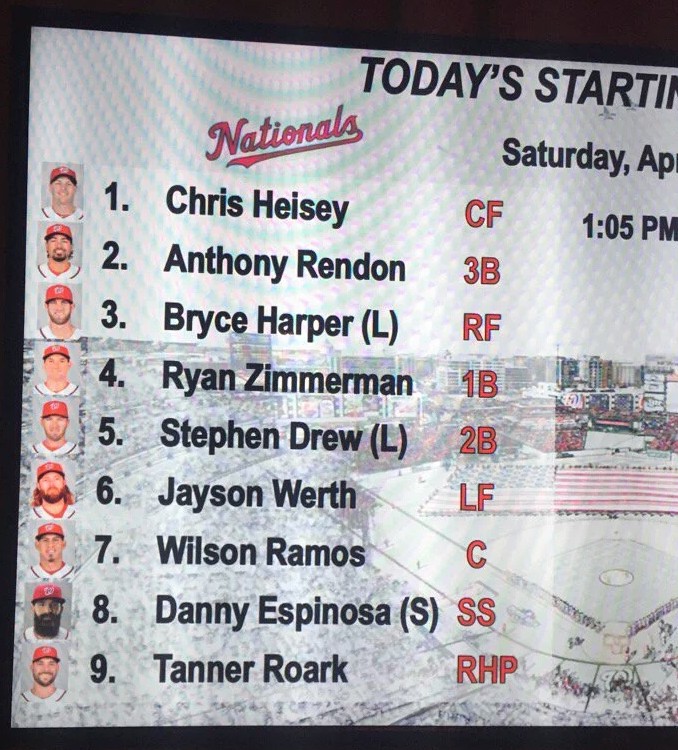 Lineup (subject to change without notice):

This entry was posted in InGame, Roark. Bookmark the permalink.
← Previous Article | Next Article →