UPDATED: The future of the #Nats in Viera

Here is a fantastic group of photos from Gerry Gleckel which gives you a look at several Nats up close.

Under the watchful eye of Nick Johnson, the Nats 1st baseman rotated in a group of Ryan Zimmerman, Tyler Moore, and Clint Robinson. Nick was giving pointers on positioning and angles to the bag. Clint Robinson was looking much better out there getting down on groundballs.

The coastal winds were blowing and most players wore their sweatshirts and thermals in the morning session.

A Wilmer Difo sighting with a new hair style. 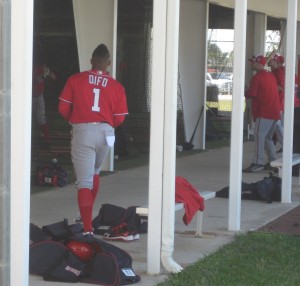 Guess who this player is? You will see below. Hint jersey #7 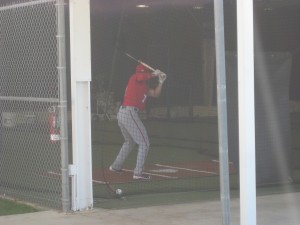 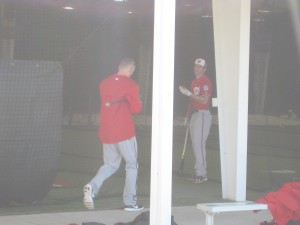 Certainly looks like Trea Turner has put on some size in the picture of him sitting. 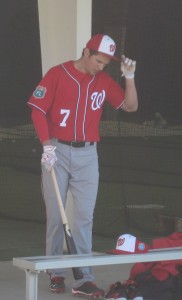 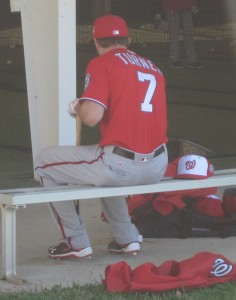 *Except Werth, who got sick and was sent home before he gave whatever to everyone else. (Must be that new crack medical staff they have.  Oh, wait, that was just Dusty and his experience.  Never mind).

Full squad workouts started with warmups, which were really needed given the wind speed and chill in the Viera air.  Most players kept their windbreakers on for most, if not all, of the workout, so I apologize for not labeling every player in sight.  Lots of players are familiar enough without their names and numbers:  for example, unless Bryce was wearing a hijab, the fans would continue to follow him from field to field like iron filings after a magnet. Every time he changed fields, you could hear the kids of all ages running after him. Chris Heisey?  Not so much.  Luckily, Chris put on his batting helmet, so I got the number and could look him up on the roster sheet they give out at the front gate. When the players paired up for long toss, Bryce was the one left over, since his normal partner would be Werth, who was sick. Don’t worry, they found someone for him! Somehow, three of the balls made it out of the field into the hands of the kids lurking at the string barriers.

To make the most of the time for the fielding drills, there are multiple coaches at the plate, hitting grounders to first or third and the yelling where to field the ball (if at all.  Sometimes, they just grab the ball, make the throwing motion, but don’t release).  Nice to see TTB in his normal 3rd base position, and Zim looked perfectly normal at 1st. 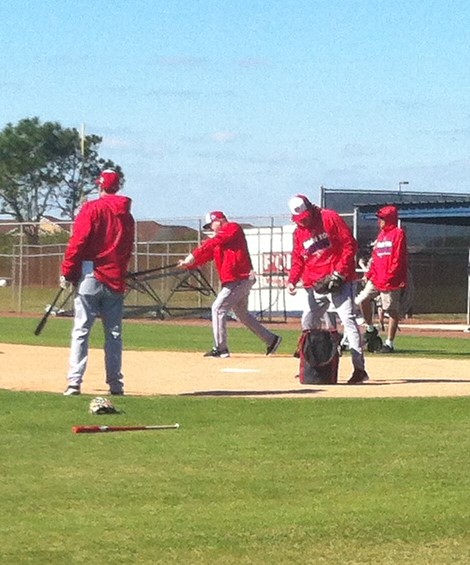 There were fielding drills and batting practice at all 4 fields.  Dusty rotated between the fields, observing, joking, and offering advice along the way.  Ramos seemed to be really whacking the ball today:  but catchers have been practicing for a week already.  Giolito was one of the pitchers doing live practice today, with Kieboom catching him.

Espinosa still has more face fur than anyone (but I didn’t see Werth.) Probably using it as a windscreen today. Dusty was very complimentary of Espinosa and his contact in his ‘live’ BP session.

Here’s Trea and the “red-leg guys” (Bryce and Zim) getting ready to take batting practice.  Some of the practice was against a “real” pitcher like Arroyo, some was just, well, batting practice.  Even when Zim and Harp weren’t hitting, just serving as practice batters for the strike zone, it was good to see them in their batting stances, bats wiggling at the ready. 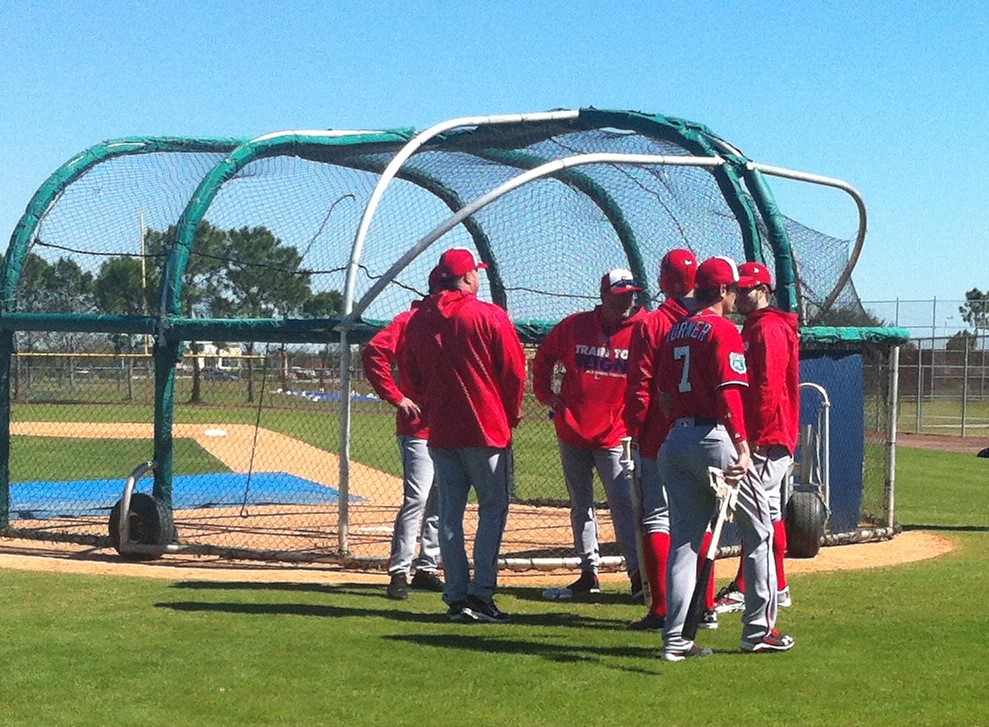 And here’s Trea Turner getting some advice. We will keep the details between coach and his student private. 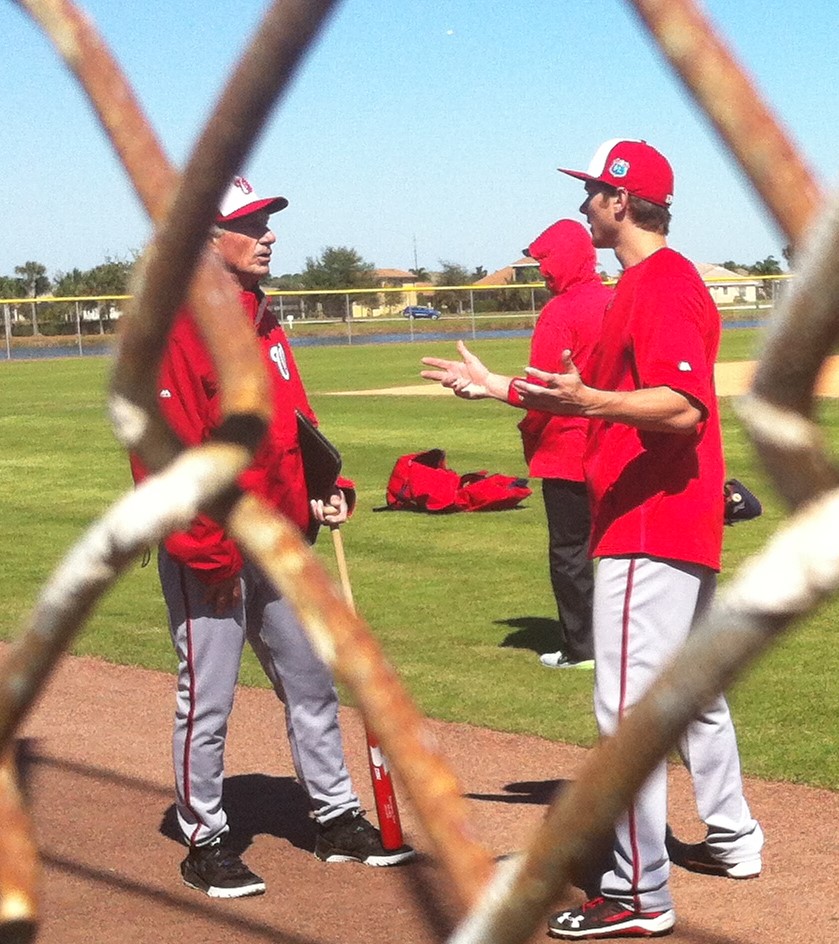 The fields were much busier today on both sides of the fence, as you’d expect with the full squad workouts.  The fans were two deep at some points along the fences (OK, maybe not when I watched Goodwin taking batting practice.  Had that fence pretty much to myself, but Dusty was there watching).

Speaking of Dusty, there is one place he doesn’t take that bat.

Now that there are more position players to work with, the drills can be more like game simulations:  guys line up to take their turns handling bunts, throwing to first or third, etc. Can’t say that anyone stood out on those drills, but I didn’t see any real fails, either.  A lot of these drills are being recorded by the Nats, I assume for later review by the coaches.

After the practices, there were agility drills.  I have to say that Trea and TTB definitely have Moore beat in the agility drills.  Spouse (PE major) noticed that Tony has “springs” when it came time to do the hurdle drills. 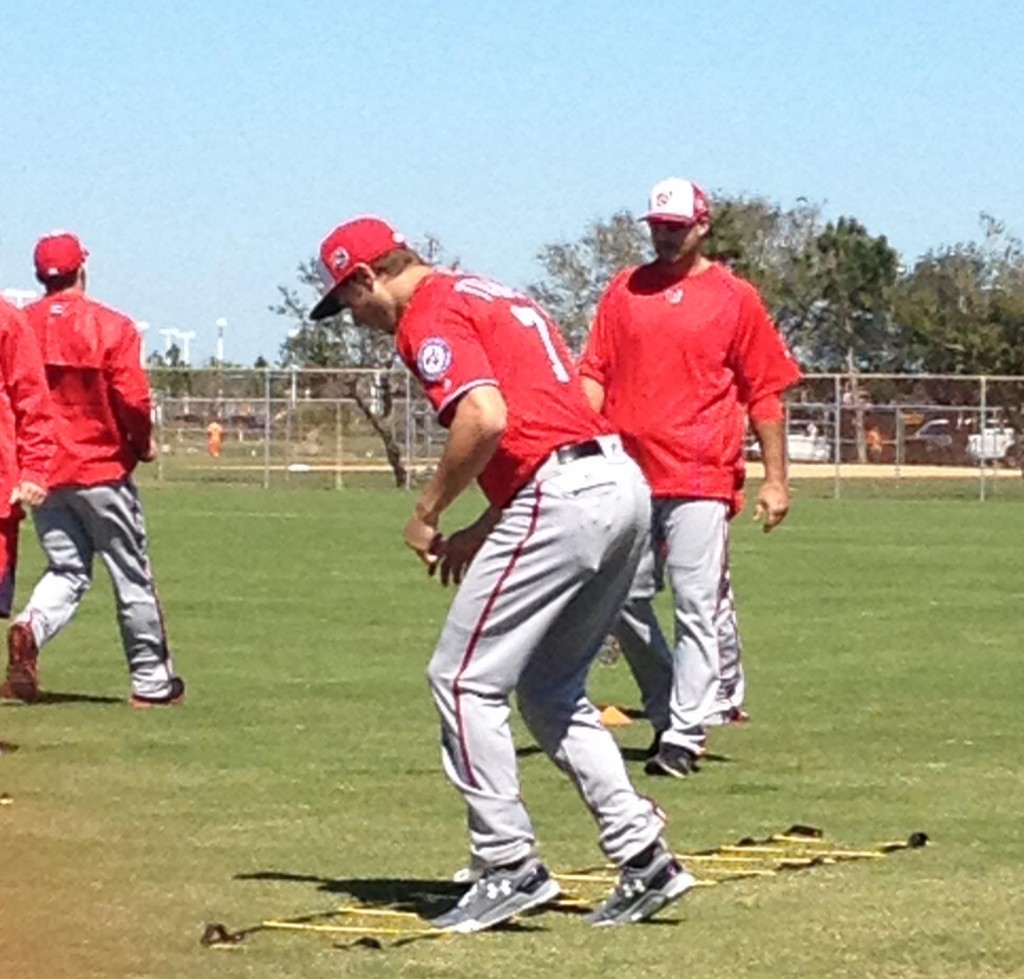 Wrapped up with some core work: the exercise below is not just an “up and hold” exercise:  the guys have to flex 10 times on each side while holding themselves off the ground.  Having done that type of exercise myself, I can assure you that the core is very much involved there.

Total time involved is almost 3 hours, although there is definitely some “stand around and wait your turn” time in most of the practices.

So, after five days of observing Spring Training, what can I say about this year?

Max is well named.  He is just all-out no matter what he’s doing.

If everyone can stay healthy, there’s going to be some darn good baseball played at Nats Park this year. See you at the games—next live report March 10.