A busy Monday in Viera

Posted on February 22, 2016 by ArVaFan aka Laura Peebles

Spring Training, Viera, Feb. 22, 2016
There’s nothing as beautiful as a sunrise over a beach . . . except a sunset over a ballgame.—ME

Yep, got up and took a jog on the beach before heading out. Watched the willets and sanderlings dibbing for their breakfast, and had a stare-down with a couple of terns who didn’t want to get up when I approached. I agree with A-Rod: running in the sand is a great way to disguise how slow you are.

But I digress. On to the fields, where although we arrived later than yesterday, so did the P & C. Susan at the gate informed me that in the DJ (and earlier) eras, the players could either walk over, or take a van that deposited them at the gate (then there was a “string course” to get them to the field without too much fan interference). MW had made them take the van or the golf carts over, so now that seems to be the routine for the players—although Dusty walked over, with one coach, while we were talking. Could have gotten him to sign my hat, but I already have that.

The camp seems more relaxed than last year. It’s not just one thing: it’s a sum of several little things (the timing of the drills, the air horn being more of a suggestion than an order, the amount of laughter between the players and coaches, Dusty teasing a few players, one of the coaches walking in singing “It’s a beautiful day for a ball game.”)

Pap did not get a separate ride over today. He seemed in high spirits greeting his teammates. Dusty did spend some time talking with him during the calisthenics portion of the workout.

The team didn’t do the stretch that led to the Papelbon pretzel yesterday, so you’ll have to settle for this: 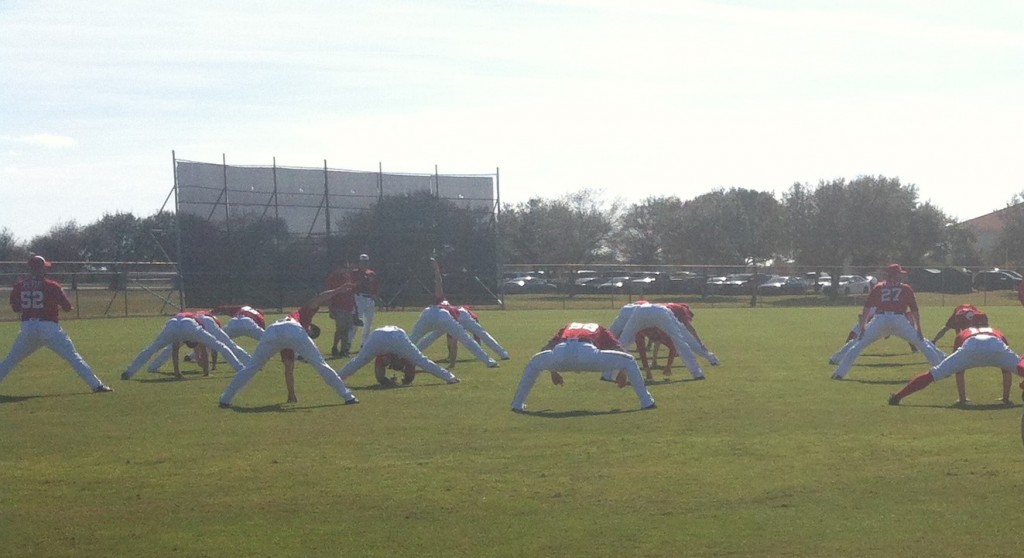 Had a chance to chat with Michael Barrett, the minor league catching coordinator. He’s not related to Aaron: they compared genealogies and they didn’t match up. Michael will be traveling to all the minor league teams.

There was almost an accident during the first round of workouts: Treinen and Perez were paired up for long-toss. Treinen threw a little off center, and when Perez dived for it, he had to roll out of the way to avoid taking down Dusty. Dusty decided to move to another group after that!

On to the pitching. The first group included a fuzzy-faced Scherzer, who was closest to the fan end of the enclosure. His first pitch was, well, let’s say less than Scherzer-esque. Max: “Oh, sh*t.” Fans: Laughter. Max: a sheepish “Oh, sorry.” I don’t think he was that happy with his pitching today, but then for him anything less than perfection would be less than satisfactory. He’s already working on pitch-calling with Ramos: he would tell Ramos what the count would be, and Ramos would signal the pitch. Other catchers gave “their” pitchers advice as well. 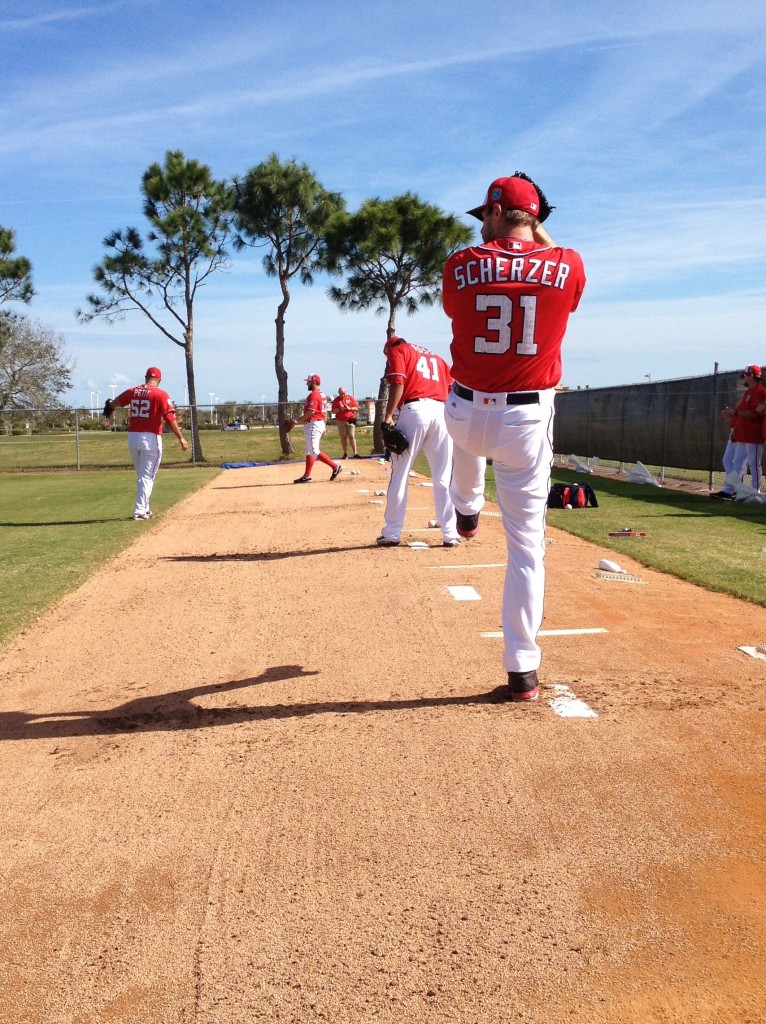 Need to have a word with my auto-corrupt: when forwarding the photo of Max from my phone, it wanted to change Scherzer to geezer. Must be the Florida GPS location.

What does Spring Training sound like? Cleats on concrete, cleats on gravel, balls hitting mitts, the catchers calling the pitchers’ pitch counts, Maddux reminding the players to drink water, bubble gum popping, bilingual coaching and joking, golf and groundskeepers carts buzzing everywhere, the sound of the tarps being nailed into the ground on the practice fields. Especially when there are four PFP going on at the same time, there’s a lot of commands “Run it out,” “Runner on Second”, interspersed with “I got it, I got it, I got it!” What’s missing is crowd noise. Everyone watching is really quiet: you’d think we were watching tennis or golf. I guess it’s because we really are close enough to potentially distract the players (and also, because there might have been, well, two dozen fans today total).

On to the pitchers fielding practice. Giolito needs practice. He overthrew first the first two times he fielded a bunt, and missed third the first time, too. He got some coaching from Speier, and did get better through the drill. Shouldn’t have been the fans making him nervous: we were the only two fans watching. At the end, he got a high-five and I’m pretty sure Speier gave him a 65%. Note: in this drill, the pitcher throws (not pitches) to one coach at the plate, another coach (or the same coach) at the plate tosses a ball that would be the bunt for the pitcher to field to first or third. So there’s no actual bunting involved.

After all the pitchers are done for the day, the catchers have their batting and fielding practice. Spouse watched the other field: apparently Kieboom lived up to his name by putting at least 20% of the pitches over the fence. Here’s Dusty giving Ramos some hitting advice.

There’s a drill I’ll call catchers on the corners. Catchers take turns at the plate, third, second, first. A coach pitches to the one at the plate, who then has to throw to the catcher at the base called by the coach. So the catchers get practice on both throwing and receiving. Sorry to say, but Ramos didn’t look that good on the receiving side (no, he didn’t drop them all. But he didn’t catch them all, either). But it’s early yet.

After all that, the catchers still had running and stretching to do. Ramos kept up reasonably well on the running drills, although he did get called for a false start. Lobaton is definitely a faster runner. 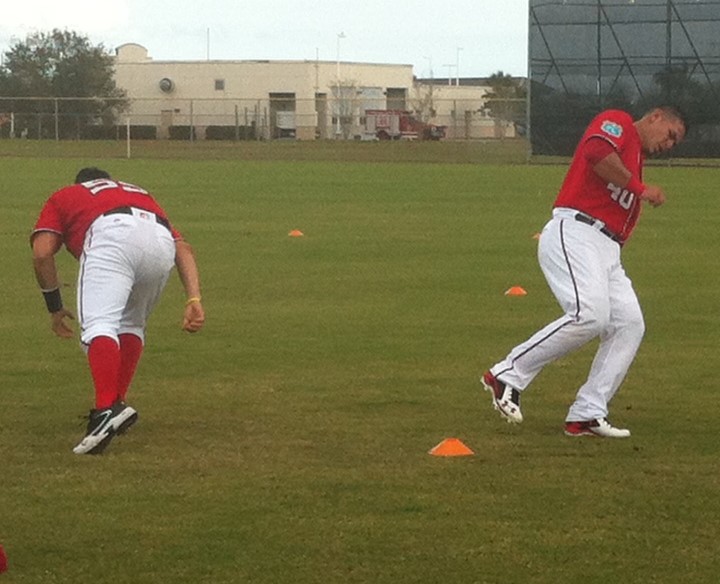 Dusty came over to check on this group, and asked Suero and de los Santos why they weren’t running. They said they were done. Dusty’s response: So why are you still smiling? Run some more! [editorial comment: thought crossed my mind at that point: “you know, those same words would have sounded so much different coming from MW.” You know, I’m beginning to get hopeful for the season.]

This entry was posted in Papelbon, Ramos, Scherzer, SpringTraining. Bookmark the permalink.
← Previous Article | Next Article →