Intentional walks via HBP. Bryce Harper has a target on his back.

On May 29, 2015, Tony Cingrani came in as a reliever to face Bryce Harper with 2 outs, and Span on 2nd base with 1st base open.  The world knew Cingrani wouldn’t give Bryce anything to hit, and possibly would just intentionally walk Harper who was ‘en fuego‘. Instead on pitch #1 thrown by Cingrani, he nailed Harper square on the spine (see video link below) with a fastball measured at 93.7 mph that was hard enough to crack bone and seriously injure Harper. 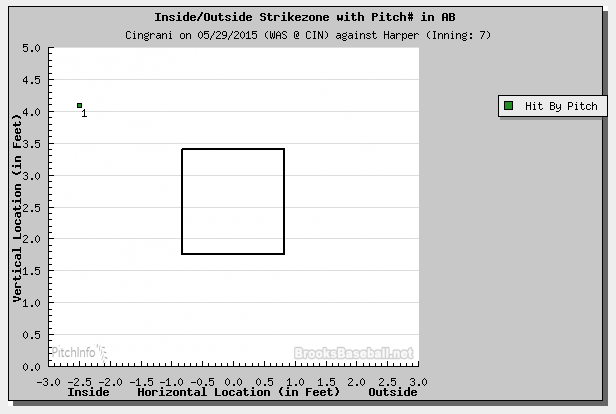 You can debate whether it was intentional, but why throw 4 pitches and impact your WHIP when you can throw 1 pitch that doesn’t affect your pitching non-ERA stats that most look at which is WHIP, BB/9 K/BB, and pitch count.

Harper was finishing the greatest month in his career and was on a Ruthian HR pace as he clubbed 13 HRs in May with 18 total HRs for the season to date and 28 RBIs in the month of May and was at a May slash of .366/.493/.899/1.392 before he was nailed on the spine, and would sit out the next game, and didn’t look himself for several games after the HBP.

The reason we bring this incident up is because it never got the press that Papelbon got when he nailed Machado.  Where was the outrage?  That spine shot could have cost Bryce his career and quite possibly cost Bryce the Triple Crown as he was so hot before the HBP that you’d swear his hair was on fire when he ran the bases.  Harper’s monthly slugging % and HRs nosedived (to very good numbers instead of Herculean numbers) after that HBP. Bryce hit just 6 HRs in June, 5 in July and 2 in August.  Add those numbers up and from May 29th to Sept 3rd, Bryce hit 13 HRs which was the same number of HRs he hit in the first 28 days of May 2015.

For Cingrani, he threw 1 HBP in all of 2014 in near double the innings he pitched in 2015, and with no surprise, that hit-by-pitch on Harper was the 1st one of the season thrown by Cingrani. The next time Cingrani gave up a HBP was when Kris Bryant was on 2nd base, and he nailed Montero on the the 1st pitch.  Sound familiar?  See a pattern here? His 3rd and last HBP of 2015, Starlin Castro was on 2nd base and guess what happened to the dangerous Anthony Rizzo?  You guessed it, HBP.

You can view the Bryce Harper video here and read the story as told by SB Nation.

Is there a double or triple standard here?  People here and other places are still talking about Papelbon’s HBP on Machado and it was discussed on TalkNats a few times this week again.  The Cingrani HBP’s are suspect and he wasn’t suspended or even accused of being a dirty player and instead the table was turned on Bryce by Cingrani:

Cingrani on Harper HBP: "He should have jogged, but what are you going to do? Be a baseball player. Sorry I hit you, run.” #reds

Bryce knows that Cingrani can control a fastball.  This wasn’t a Cingrani curveball or slider which Cingrani has given up HBPs in his career, but the fastball?  It was amazing how great Cingrani’s command was when the batter after Harper stepped into the batter’s box. Cingrani threw 4 pitches to Ryan Zimmerman and all of them were fastballs and 3 were strikes.

Harper was a gentleman after the game: