Where is the #Nats thin ice?

We are now less than 2 weeks to the official start of Spring Training.  Metaphorically speaking, every team this time of the year has that thin ice warning for the areas of their team that lacks depth and screams of danger.

The Nats have said goodbye to several key players and this Jordan Zimmermann tweet (below) from the ice is a perfect spot to bring up that Rizzo didn’t add another frontline starter to replace Zimmermann for the 2016 rotation and instead chose to go with existing team depth.  It now looks like the Nats will go with Joe Ross and Tanner Roark at the back of the rotation with AJ Cole and Taylor Jordan as 40 man depth as well as Yusmeiro Petit who can make spot starts. Lucas Giolito is not on the 40 man roster, and he could and most likely will make his debut in 2016 for the Nats. Bronson Arroyo is an intriguing addition to the Nats, and like Giolito is not on the 40 man roster.

The next area of concern is counting on the health of Jayson Werth and Ryan Zimmerman and their declining output.  Health is everything and both players have had their share of injuries.  This is a year that the Nats must hope that their players can be healthier and put up better numbers.

2. Thin Ice Warning #2 is the depth on the roster and in the minors in case of injuries

The bullpen will rely on Papelbon anchoring the back of the bullpen, and when the Nats traded Storen, the team left themselves without a proven closer behind Papelbon.  Papelbon’s stats with the Nats plummeted from where he was with the Phillies.  ERA went from 1.59 to 3.04 and K/9 went from 9.1 to 6.1.  The back of the Nats bullpen will rely on the youngster Felipe Rivero and free agent Shawn Kelley.

3. Thin Ice Warning #3 is the depth in the back of the bullpen

Shortstop will transition from Ian Desmond to a competition with Danny Espinosa, Stephen Drew and Trea Turner.  While we all feel great about Trea Turner, there is a cautionary tale there that Rookies take time to adjust to full-time exposure in the MLB. Byron Buxton who was the #1 prospect last year got schooled in Minnesota.  Trea Turner is the 11th rated prospect in baseball and should be a future star.  You hope Trea will look like a Rookie of the Year candidate.

4. Thin Ice Warning #4 is the production from the shortstop position 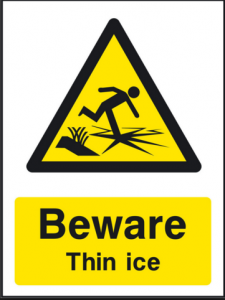 The Nats could still make some moves going forward and the team has been proactive adding their new Medical staff to the organization. The Nats as a team at this point in the off-season look better than many others who still have roster holes.