The Washington Nationals on September 27th of 2015 hit their low-point of the season when Jonathan Papelbon put his hand around Bryce Harper’s neck in what we’ve called “The Choke”.  It became emblematic of the way the 2015 Nats season went as it was also a choke in the eyes of many.

The Nationals were written about by one writer who claimed that there was dysfunction in the Nationals clubhouse and this story hit the news stands the day before  “the choke”. Was it coincidental in the timing that tension increased after that story to spill over to a physical altercation or was it totally unrelated? We will never know, but that story was not a positive picture of the clubhouse and this paragraph from that story may have sealed the fate of Matt Williams even if “the choke” never happened:

Now, several Nationals players believe Williams won’t be able to grow even if the club brings him back for 2016. And this isn’t just one or two malcontents. These opinions span positions and experience. “It’s a terrible environment,” one player said. “And the amazing part is everybody feels that way.”

Mike Rizzo responded days later to that quote and others by saying, “If I knew who that person was, I would respond to it. When it’s some blind accusation from an unnamed source, I don’t react to those.”

We could all guess who “that person was”; however, we agree with Rizzo that unnamed sources  putting out negatives like that aren’t what we are about.  Not making the playoffs of course raised the tension level in the Nats clubhouse.

When the 2015 season ended so did many jobs in the Nationals organization with the reigning NL Manager of the Year (Matt Williams) and many in his coaching staff headed to the unemployment line.

Matt Williams is gone and so is the player (Drew Storen) who was none too happy after his public demotion when Papelbon was brought in as the closer as Storen was traded earlier this month ending his employment with the Washington Nationals.

Still after all the moves Rizzo has made, the Nats are still a target from those who say the Nationals clubhouse is toxic and trying to say that players aren’t coming to the Nats because of a toxic clubhouse. James Wagner made this comment in December regarding why Zobrist didn’t come to the Nats saying, “He didn’t feel as comfortable in the Nationals clubhouse.”  We contacted Zobrist’s agent at Octagon for a comment about Wagner’s quote, and did not receive a response.

Rizzo said this after the Winter Meetings in December, “I don’t see any common thing between the 3 [O’Day, Heyward, Zobrist] other than they chose the teams that they chose over many other teams that had interest in them.” 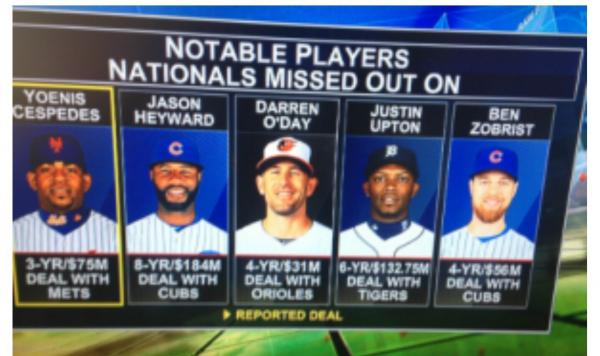 On MLB Network yesterday Ken Rosenthal went on a rant, “When you look at them all individually, you can understand why each player might have made the decision that he did.”

“But the other thing you hear rumbling about in the industry is that players don’t want to go to Washington. They perceive that clubhouse to be a less than happy and harmonious place and they feel that it’s just not a great situation right now.”

“That said, that situation if it is indeed as bad as players perceive should change this year. Part of the problem last year was Matt Williams, no doubt about it, and part of the problem was the Nationals had too many guys in their walk years. Too many guys thinking about individual goals, perhaps, instead of team goals. And now, you have a new manager, one of the great unifiers in the game, Dusty Baker, and you also have a situation where  Strasburg is really the only major free agent they have at the end of this season.”

Rosenthal continued, “So things should improve, but this is a team with strong personalities, and there are players who perceive them to be again not the best group in terms of cohesion, a place where a lot of players seemingly do not want to go.  Whether their reasons are understandable or not, they’re making that decision time and time again.”

Rosenthal and Harold Reynolds bantered back and forth as Reynolds asked, “Ken, I’ve got to ask you. I mean it’s like the elephant in the room that almost all these guys [on the Nats roster] are represented by the same agent, too. How much effect does that have that Boras represents so many players on this team?”

Yes, 9 players projected to be on the Opening Day roster are represented by the Boras Corporation but to try to say that’s an issue in the clubhouse seems ridiculous, and this just goes to how outlandish the entire segment on the MLB Network got to.

Let’s get back to Rizzo inking Daniel Murphy to a deal.  That was one of the biggest signings of the off-season and occurred after Zobrist, O’Day,  Heyward and Phillips all didn’t join the Nats for various reasons.  Rizzo also signed Shawn Kelley, Yusmeiro Petit, Oliver Perez, and Stephen Drew. It’s been a busy off-season for Free Agents and that also includes several Free Agents signed to Minor League deals like Sean Burnett, Scott Sizemore, Chris Heisey, Reed Johnson and Jhonatan Solano. All these players had choices and chose the Nats, and three of them are former Nats.

Surprise surprise that there was some loud noise and criticism on Twitter and other blogs of negativity on Rizzo that he failed on Zobrist and swung and missed badly on Brandon Phillips, and he didn’t get Darren O’Day or Cespedes.  On the radar and off just as quickly was the Nats rumored $200 million offer for Jason Heyward.  Commentors were trying to put together a pattern there, and even some in the media that Rizzo was getting turned down everywhere.

Here is what Tom Boswell of the Washington Post had to say after the Murphy signing,
“Partly, this is January happy talk. Murphy was the Nats’ third choice for second base after Zobrist and Phillips.”

When you are counting chronologically, it would be the third choice; however, if you told Rizzo at the onset of the Hot Stove season the eventual finalities of Zobrist, Phillips and Murphy, he quite possibly could have made Daniel Murphy his first choice from the start. Circumstance changes results.  Murphy most likely would not accept a 3 year $37.5 million backloaded deal on November 15th.  On December 24th, Murphy was ready to take that deal and did.  Timing is everything.

Ben Zobrist who will be 35 years old in May would get a 4 year deal at $14 million per year, and Rizzo didn’t want to go more than 3 years on a deal to Zobrist. Brandon Phillips who is right-handed and is Zobrist’s age, had a complicated situation where Phillips had to agree to waive his no-trade clause and was rumored to demand extra years on top of the 2 years he was owed which didn’t fit Rizzo’s plan in many ways.  Cespedes had his own reasons also.

Sometimes in deals it’s the GM who says no and didn’t get turned down.  Often times, the best deals you make are the ones you did not do.  Rizzo has a plan and sometimes patience pays off, and sometimes the best laid plans do not.  They say it takes 2 to tango, and you can take a horse to water but can’t make ’em drink.  Zobrist, O’Day, Heyward,  Phillips and even Cespedes all had parts of the round peg that did not fit perfectly in the circular hole. The hole is small with a narrow focus.

After missing out on Zobrist & Phillips the #Nationals have signed Daniel Murphy by @bdentrek #MLB #HotStove https://t.co/nXOw7ScWPb

We knew Rizzo’s Hot Stove objectives as well as Dusty Baker’s and Bryce Harper’s. All 3 were clear as to their off-season wishes and objectives. “The 2016 Nats will be younger, less experienced but more athletic and speedier. A little transformation…We would like to get more left-handed.” Rizzo wanted to get younger and more athletic while adding that lefty impact bat. Dusty Baker wanted that high OBP speedy leadoff man and an improved bullpen. Bryce Harper wanted that lefty bat and the big right-handed bat before or after him in the line-up. The Nats could end up younger when all is said and done.

The bullpen is stocked with 4 new arms with the names of Kelley, Gott, Petit, and Perez. The infield now has that lefty impact bat with Daniel Murphy, and he’s athletic with some deceptive speed.  The Nats got younger, speedier, and more athletic by adding another lefty with the acquisition of Ben Revere.

Many times commentors were told not to judge Rizzo in November or mid-December, rather to wait and see how this roster looks when Spring Training starts.  We could say right now that we shouldn’t judge Rizzo on January 10th because he might not be complete with his roster despite twice in the last week when he said he could start the season with this roster, and the baseball world saw him a day later add Revere.

We said early in January even before Cespedes that if we had to judge Rizzo on his report card on January 10th, it would be a solid B to B+, and if the Nats got Cespedes we would have moved the Nats to an A if they did nothing else.  Yesterday, Sports Illustrated gave the Nats an A- rating: http://www.si.com/mlb/2016/01/25/winter-report-card-washington-nationals  based on what they’ve done this off-season, and they aren’t a Nats blog which makes it all that more impressive to see that our B+ was bested by an A- at Sports Illustrated!

Thank goodness for those who don’t jump to the negative because there’s more shock value in that, and we know that you get more “clicks” with writing scathing stories of extreme negativity, and we don’t play that game here. We thank “FarAway” for the heads-up on this blog piece on Fangraphs:  http://www.fangraphs.com/blogs/picking-the-top-of-the-nl-east/

One fact you can ponder is that the 2016 Nats clubhouse won’t look the same in personnel when you consider that there will be over 1/4 of the players will be new to the team plus an almost entirely new coaching staff except for Henley and Schu plus the new training staff. The Nats have added Ben Revere, Stephen Drew, Daniel Murphy, Yusmeiro Petit, Trevor Gott, Oliver Perez, Shawn Kelley, and also Dusty Baker.

To get to an A to A+ report card, we said before that it would take the acquisition of Andrew Miller and a creative trade of Papelbon. Starters are at a premium and while we have discussed ad nauseum the armchair GM strategies of adding a starter through free agency and then trading from that strength it just didn’t work out for Leake or Kazmir or even Chen.

Rizzo surprised us jumping into the mix on Cespedes, and Mike Rizzo still might not be done.  Sit back and relax as we are just about 3 weeks from the start of Spring Training.

You can dwell in the negative or feast on the positive.  Spread an encouraging word to your friends.  Change the measurement of your glass. Mine is more than 1/2 full!

This entry was posted in CoachingStaff, Dusty, Murphy, RizzoForADay. Bookmark the permalink.
← Previous Article | Next Article →