They say ‘speed does not slump’.  Speed also isn’t all about stolen bases; however, that is the easiest speed stat to look at, and the Nats were poor in 2015 in stolen base attempts ranking 4th to last with only 57 successful stolen bases. 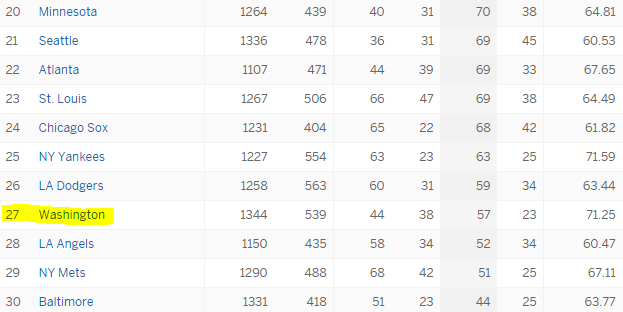 The top 10 teams in the Majors all had 90 or more Stolen Bases in 2015, and the Royals were actually 5th in the Majors with 104 successful swiped bags.  It’s an illusion sometimes to think the Royals were stealing bases “at will” but sometimes the threat of running is the magic elixir in their arsenal and that becomes the great intangible.  Sometimes it’s going 1st to 3rd on a single or 1st to home on a single if you remember this play by Lorenzo Cain in the 2015 ALCS.

Or one of the greatest running plays in World Series history with Hosmer scoring from 3rd on a groundout to tie the game.

Cincinnati, Arizona and Houston all attempted more than 1 stolen base per game, and of course Dusty Baker was last with Cincinnati and speaks often about the need for speed.  In many of Dusty’s thoughts on the 2016 Nats roster he was looking for that speedy lead-off man with a high OBP.  He now has Ben Revere for that spot and Trea Turner in waiting.

From Dusty Baker in November, “You’re always in need of left-handed pitching, left-handed hitting, and in need of speed. I think that’s the number one thing that’s missing, I think, in the game is speed.”

“I don’t know if we got that [lead-off] guy yet because the other guys are prone to strikeouts and don’t have that high OBP. We had that guy in Denard Span.”

That was before and this is now.

“With the history of the Nationals and the history of injuries, we’ve got to keep our frontline guys healthy and we’ve just got to stay healthy. That’s our #1 priority [going forward].”

It sounds like Dusty Baker is a happy man.  He got Oliver Perez as an extra left-handed pitcher, Daniel Murphy and Stephen Drew as extra left-handed batters, and Revere for his speed game and lead-off abilities.

Mike Rizzo is happy also.  He spoke a conference call about the Revere acquisition, and here are his thoughts:

“[Ben Revere] is one of the fastest players in the league. He can steal you a base. He plays good defense. He’s a left-handed contact hitter. When we talk about players like Ben Revere and his skill set, he doesn’t hit many doubles and he doesn’t get many walks, but the guy gets on base. Last year, he was at a .342 clip. His singles turn into doubles. We feel good about him. He’s hit at the top of the lineup each stage of his career.

“He’s got a propensity to steal you a base in big situations and he’s the type of leadoff hitter that is very tough to pitch against. He fouls off a lot of pitches and has really good at-bats. We look forward to seeing him on our team this year. He’s played against us for years. He’s a guy that we’ve respected for a long time. It should be fun to see his gregarious personality, his smile and his energy, the way he grinds out at-bats, plays defense and steals bases.”

With Davey Lopes as the ‘unofficial’ baserunning coach, the Nats could see the running game emphasized for these 2016 Nats.  Speed is the great intangible as pitchers often change their delivery to quicken their time to the plate with a speedy runner on base  and when pitchers change their normal delivery they are more prone to mistakes, and you tend to see less curveballs and change-ups which helps the batter.  This all plays into the strategy of causing havoc on the basepaths.

If a speedy runner causes an errant throw, and the runner ends up on 1st or 2nd base they don’t get any credit in any major stat unless they score a run and it’s negated by the drop in the BA anyway.  Watch how many times Revere and Trea Turner hustle out of the box and are safe on throwing errors and tell the stats geeks that shouldn’t count somewhere.

Runs Scored factor into WAR but stolen base efficiency doesn’t.  OPS has the slugging component which only gives 1 point for a single and negative points for an out. If Ben Revere turns 31 singles into 31 chances to be standing on 2nd base after a stolen base and then is caught 7 times removing himself from the basepaths, why aren’t we accounting for that in a modified OBP and modified OPS?  Let’s continue this thought and create a new stat (see table below) which in the annals of history has probably been suggested in some formats before by stat hounds.

Speedsters of the SABR era Dee Gordon, Juan Pierre and Coco Crisp also aren’t helped by standard stats. Crisp has said before that  Sabremetric stats don’t quantify him well, and they would be right except Billy Beane “gets” this type of player and so does Mike Rizzo. Beane signed Crisp a few years ago to a free agent contract.

The issue is most fans don’t get it.  Ben Revere might agree with Crisp as we are going to graphically show you what happens when we turn 31 steals into 31 extra bases (as doubles) and then we will remove 7 on-base chances off for those Caught Stealing and deduct those from the OBP as if he never got on base.  OBP goes down 11 points but SLG goes up almost 52 points and the OPS rises a net of 41 points as OPS stands for OBP + SLG and the adjusted number would take that OPS to a very respectable level.

With a .760 adjusted OPS, only 3 Nats would qualify for enough plate appearances in 2015 to best that mark and that would be Harper, Escobar and Clint Robinson.

It’s time for BBRef and FanGraphs to start using this stat and take it one step further and deduct TOOTBLANs also, and if they can create a stat to account for hustle errors caused by a batter, it’s a bonus that should be rewarded with credit for that in their OBP.  Staying on base is just as important as getting on base and some would say staying on base is more important because it often shifts momentum. Michael Taylor who had a poor OBP was guilty of 7 TOOTBLANs for 2015 to lead the Nats and Bryce was 2nd on the team with 6 TOOTBLANs.

Expect many more Ben Revere and Trea Turner posts in the future like we’ve done in the past.

Per @statcast, Trea Turner reached 22.188 mph on that near-hit. Billy Hamilton has topped that only 3 times this year going home to 1st.

This entry was posted in Dusty, Revere, Turner. Bookmark the permalink.
← Previous Article | Next Article →