Your 2016 Washington Nationals roster, payroll, projections as of today!

Mike Rizzo wrapped up his last few hours in Nashville to pull off a trade that needed to be done at some point this off-season.  No, not Papelbon, it was Yunel Escobar who was traded from the Nats along with $1.5 million in cash to the Angels for hard throwing reliever Trevor Gott and a low rated 28 year old Minor Leaguer (Mike Brady aka Mr. Brady to those of us old enough to know that reference).

Escobar was definitely the most fashionable person on the team. But don't worry, Trevor Gott will make up for it. pic.twitter.com/6QemXItWJ2

This trade also creates a domino effect on the active roster and fills up the 40 man roster at 40 currently.  We have penciled Difo to take Escobar’s spot on the roster and Gott into the Opening Day roster and removed Blake Treinen.

Don’t fret, we expect Mike Rizzo to make a few more roster moves and shuffles before the April 4, 2016 Opening Day which is now 115 days away.  Clearly we all know the rumors that the Nats are ‘seriously’ pursuing free agent Jason Heyward and others such as Mike Leake. 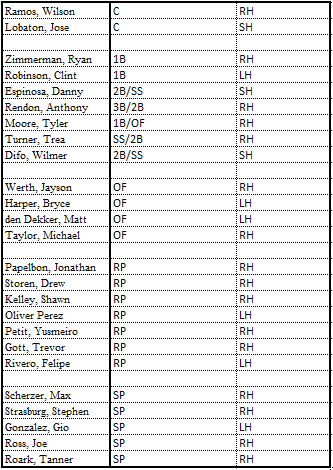 Analyzing the personnel on the roster, who will be Dusty Baker’s high OBP speedy leadoff man and who will be his starting shortstop?

With Yunel Escobar gone you have a hole at shortstop when you consider Major League experience totals 63 combined games between Espinosa (58), Turner (5) and Difo (0) if you use Baseball Reference as your guide or 65 combined games if you use FanGraphs as your guide Espi (59) and Turner (6) with a further note that those games include some partial games played at shortstop with Espi putting in 468 innings and Turner 25 2/3 innings at shortstop and if you divide that by a 9 inning full game that translates to only 55 full games played at shortstop in the Majors by them combined.

This lack of experience is prompting what we’ve learned from our source that Rizzo has reached out to Dan Lozano who is the agent for 37 year old Jimmy Rollins who would be the stopgap to Trea Turner as to not rush him to the Majors and then Rollins can settle into a bench role like he had with the Dodgers when Corey Seagar took over Shortstop in September.  This will be something to keep your eye on. Rollins had the worst season of his entire career in 2015 hitting just .224 with a .285 OBP. Alexei Ramirez is another Free Agent shortstop on the market and he’s coming off of a poor year on defense with a -12.6 range rating and questionable offense with the same .285 OBP that Rollins had for the 2015 season. The good news for Ramirez is that he had a strong 2nd half slashing .277/.325/.432/.757.   Very small sample sizes, Espi was a -1.7 UZR at shortstop in 2015 and a +3.5 in his career at shortstop.  It would probably behoove Rizzo to keep searching for other alternatives while considering TVT or Espi on Opening Day. 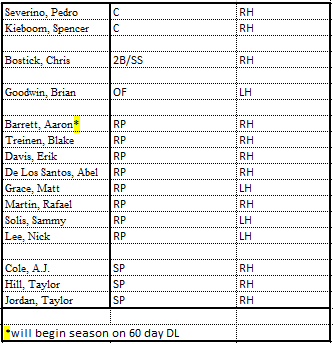 While Aaron Barrett will be shifted to the 60 Day DL, he is not eligible to be shifted off the 40 man roster right now which would mean that the next roster add would need a corresponding move.

The Nats payroll has been updated to reflect the recent moves: 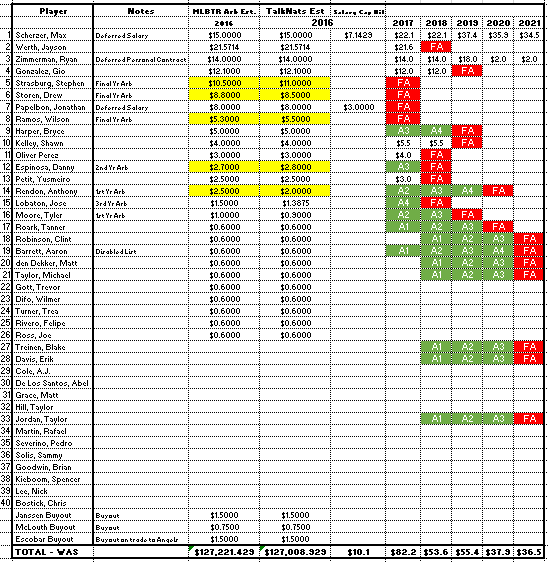