Before the clock strikes midnight EST tomorrow night, teams must submit to the league office a list of all tenders and non-tenders from players eligible for arbitration.

The Nats now have 8 arbitration eligible players after Carpenter’s DFA:

That list got the analysts at MLB Trade Rumors thinking of players who were not “sure things” to be extended a tender and Stammen, Lobaton and Moore all landed on their list of players who could find themselves among that group of players who are non-tendered.  http://www.mlbtraderumors.com/2015/11/non-tender-candidates-7.html  MLBTR points out “Please note that not all of them will actually be non-tendered — many are simply bubble players who at least merit consideration for a non-tender and could also find themselves traded.” Teams can also non-tender their player and negotiate to bring them back, but they risk a player signing with another team.

This is typically a time when GMs are working the phones trying to trade a player now before they non-tender them.  Stammen, Lobaton, and Moore all would be scooped up quickly if they were non-tendered and in that case the Nats get no trade compensation. The most likely case, Rizzo will tender all 3 and work on deals with each of their agents prior to submitting arbitration numbers or Rizzo could work on trading a player like Tyler Moore who just doesn’t have a clear roster spot on this team.

Here is MLBTR’s service time and arbitration projections for those 8 players (below).  You will note that Rendon only has accumulated 2.130 years of service time which normally is below the 3 years needed to qualify for arbitration; however, Rendon qualified as a “Super Two” which under the Collective Bargaining Agreement set forth a 4th year of arbitration for some players who fell short of 3 years of service but had more than 2 years.

TalkNats projections of arb players on our Payroll Estimates under the column of “Real Cash” that we compiled last month were slightly different than MLBTRs (highlighted): 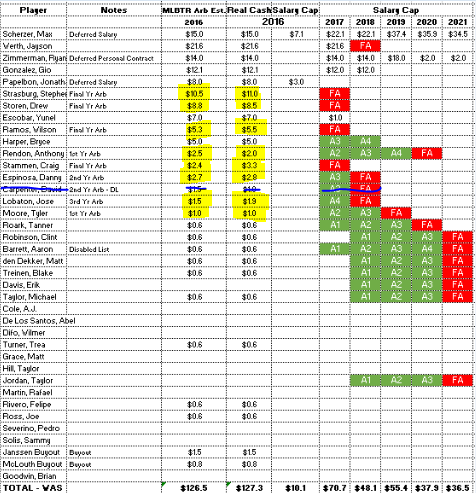 You will note that David Carpenter has been DFA’d and no longer is part of the salary equation which would bring down the TalkNats salary estimate to $126.3 million.

Rizzo will be busy today and tomorrow working the phones with agents and other teams.

One thing we do know is that if Tyler Moore stays he will need a new jersey number as Dusty Baker took his #12.

Here’s the big risk if you non-tender Tyler Moore—you’d be relying on Ryan Zimmerman as your only right-handed 1st baseman and Clint Robinson as your lefty 1st baseman with no depth in the Minors.

Zimmerman hasn’t exactly been an “Iron Horse” at 1st base and that Tweet above was the day before Zimmerman’s season was over. Read the Tweet “Revised #Nationals lineup. Original had Zimmerman. He’s been scratched. Day off, team says.”  We were concerned at the time about the awkward slide at home where Ryan tumbled over the weekend and sure enough he pulled his oblique while telling everyone he was okay. Ryan was later listed as day-to-day and there was no reason to DL him with expanded September rosters, but his season would end at 95 games played in 2015 coming after only 61 games played in 2014.

The Nats would need another righty 1st baseman option in the wings like Werth just in case Tyler Moore is no longer a Nat.  It might just be the right time for both to happen.