Back To The Future on Dusty Baker and young arms

We got an anonymous email referencing a short article in ESPN Magazine from July 12 2002 titled “Prior Restraint” that we were told would contradict the quotes that Dusty Baker made about Mark Prior at his news conference.  Seemed a little “cloak and dagger”. What does that have to do with the Nats?

Reading this ESPN article was like a Back To The Future lesson where you know the ending of the story.  The article was very insightful on how you want to handle a young arm like Mark Prior. Written right after Don Baylor was fired by the Cubs and before Jim Hendry even thought of hiring Dusty Baker who was the Giants manager at the time, this article was ahead of it’s time in 2002.

When we first mentioned Dusty Baker was a finalist on October 23rd, the comments on our pages were lukewarm if the Nats hired Baker mostly based on reputation, and many reputations are fair and many when they are negative are not.

This was the typical story on the ‘negative’ that followed Dusty Baker around  like this one from 5 years ago in Bleacher Report: http://bleacherreport.com/articles/367793-got-young-pitching-keep-it-away-from-dusty-baker  Articles on Dusty rarely talked about his successes taking failing teams to the playoffs or how former players showered Dusty with positives, rather they focused on the negatives. 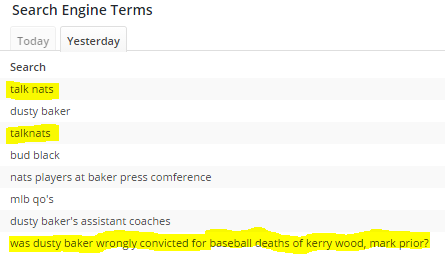 To digress, every day we get a traffic report from a software add-on called Jetpack and it tells us how people find us, where they are geographically, what they read, etc. On search engines, people actually typed these words and phrases (insert pic) and found us through Google, Bing, Yahoo, AOL, etc.

“Was dusty baker wrongly convicted for baseball deaths of kerry wood, mark prior?” was exactly how one person searched and found our site even though we never used those exact words.  Inquiring minds wanted to know and Dusty answered a similar question after his Press Conference on Thursday and appears Dusty was probably “wrongly convicted” in the world of public opinion that operate on deep emotion.  Dusty needed to answer his critics as this “ruining arms” label has followed Dusty for more than a decade or as the person more specifically typed in “baseball deaths”.

As we referenced above to this Back To The Future stuff in ESPN Magazine in July 2002, the article was written by a young writer Andy Latack who is now a lawyer.  Latack referred to future ace Mark Prior:

“…Baylor got used to the boos before he got canned. “This kid is going to be a franchise pitcher very soon,” Baylor said. “So to ruin his arm by having him throw 140 pitches? Even if I’m gone, that’s something I don’t want on my resumé.”

What Don Baylor was afraid of happening to Prior and ending up on his resumé ended up on Dusty Baker’s resumé for more than a decade even though Dusty never had Prior throw 140 pitches which Baylor exaggerated (or did he), but Prior did throw 133 pitches in a game on Dusty Baker’s watch which is considered excessive nowadays even with veterans in today’s baseball. In fairness, baseball wasn’t the same back in 2003 as it is today.  Mark Prior was just 22 years old when Dusty got him in 2003.  Dusty allowed Prior to throw 100 pitches or more in 26 games in 2003.  Prior threw over 119 pitches or more 10 times in 2003.  Prior went from 116 2/3 innings in his 2002 rookie season plus 51 in the Minors (167 innings total) to (cover your eyes) 234 2/3rd  innings in 2003 which included the post-season. Luckily Prior only attended the All Star game in 2003 and didn’t pitch. Mark Prior threw 3,401 pitches in the regular season in 2003 and in comparison that amount would rank him 4th in 2015 in total pitches behind only Keuchel (3,492), Archer (3,449) and Arrieta (3,438).

Prior would never be the same again going from an Aces 2.43 ERA and an All-Star in 2003 to 4.02 the next season with only 118 MLB innings.  His MLB career would spiral down and would end abruptly in 2006 while he became a journeyman Minor Leaguer signing with the Padres, Rangers, Yankees, Red Sox and Reds before he was done in 2013, almost 7 years after he pitched last for the Cubs.  People don’t forget easily in sports when things go wrong and they tend to look for someone to blame and that was Dusty Baker.

Before Dusty Baker, it was actually Jim Riggleman who got blamed for Kerry Wood’s first arm injury for much of the same criticims. From that same ESPN Magazine article:

“The Cubs have been in this situation before. Four years ago, they had a stud pitcher, just like Prior, whom fans never wanted to see pulled from a game. Then Kerry Wood blew out his elbow and missed the next season. Still, from his experience, Wood learned a little about the demands of Chi-town fans. “I could be at 165 pitches,” Wood says, “and [then-manager] Jim Riggleman would still get booed when he left the dugout.”

Yes, it was Jim Riggleman who was Kerry Wood’s 1st manager and managed him in the 20 K game that Game Score rated (105) as the greatest pitching performance in baseball history on May 6, 1998 which was 1 point better than the Scherzer no-hitter on the final weekend of Nats baseball in 2015.

The ESPN article had this prediction (bolded below) that just never came to fruition of matching that decade prediction and as we wrote above Dusty has had a decade ‘plus’ of the “ruining arms” reputation and this from the same ESPN Magazine article,

“…But the Cubs have other plans. This kid will be their ace for the next decade. So in his first go-round, especially with his team hopelessly out of contention, there will be no taxing this golden arm. Once Prior reaches 100 pitches, the bullpen phone starts jangling. Because for the Cubs’ brass, this is about the long term.”

Not sure if anyone has ever quoted this Andy Latack article before, but got chills reading that juxtaposition in almost a prophetic statement of what could happen if Prior goes more than 100 pitches.

This is our transcription of the 106.7 radio interview of Dusty’s answer on his reputation on handling young arms,  “And the people that are talking stuff about how I ruin arms, hey man, after 20 years, how many people don’t have somebody that’s had an arm operation? The last two years there have been more Tommy John than in the history of the game, and I wasn’t even in the game. So they can’t blame me for those. You look at the Cardinals. Wainwright has had two operations. Carpenter had to have a couple.  Garcia had a couple. You look at every team, it’s happening everywhere. There’s always haters, and you know something, go talk to my guys and see if I ruined them! Supposedly I ruined Prior?!? There was no such things as pitch counts, and we had unwritten pitch counts ourselves. Now this stuff is new with  Strasburg. If we had had the Strasburg kind of scenario and situation back then, then maybe this wouldn’t have happened, but there was no such thing at that time.”

“We’ve got a plan for [Mark Prior], and we’re not going to deviate from that.”

But what was the plan? Did they deviate from it? It does appear after Don Baylor was fired mid-season in 2002 that the interim manager Bruce Kimm allowed Prior to push the pitch counts after Latack’s article was published, but also in some needed accuracy, Baylor let Prior throw 119 pitches and 124 pitches in 2 starts on his watch.  The 124 pitch game did come after an extra days rest. More from the ESPN article:

“…Every time pitching coach Larry Rothschild goes to the bullpen to monitor Prior’s warm-ups before a start, fans scream at him. “Screw the pitch counts!” they say. “Let the kid throw!” Rothschild ignores them, but they get even louder when Prior gets sent to the showers. “Fans’ expectations are okay if they motivate a player and give him energy,” Rothschild says. “But they can also wear you down.””

Tom Verducci during Spring Training of 2003 wrote this article: 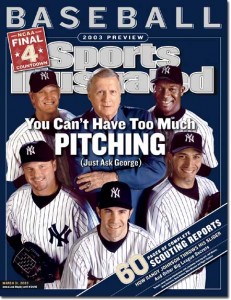 Keep in mind that the article was written in 2003, the year in question with Mark Prior and the title of Verducci’s article is, “The Magic Number It’s 120, the maximum pitch count for almost any starter under any circumstances. But does it really protect pitchers–or just managers?”

“…Rothschild says he and Kimm allowed Prior, who ended the eighth inning with 120 pitches, to complete the game because his delivery was intact and he was not laboring. “It looked like he
was playing catch,” Rothschild says.”

The Verducci article sure makes it seem like Rothschild who was Prior’s pitching coach as a Rookie and that 2003 over-used season was well aware of pitch counts. Verducci continues:

“As for Prior, who had a 3.14 ERA in his five starts after the 136-pitch cause celebre, he has a new manager: Dusty Baker, whose San Francisco Giants’ staff led the majors last season in 120-pitch games, with 19. Says Prior, “My goal is to give the team seven, eight solid innings every time out, and I want to go nine.” Will the almighty pitch count allow it?”

“It’s become so prevalent,” Rothschild says, “pitchers are monitoring it themselves. If you think you should be getting tired because your pitch count is getting up there, you will be tired. I’m not so sure we’re not developing pitchers who are conditioned to be tired at 120 pitches. Pitch counts have taken on a life of their own.”

Verducci observes pitch counts are kept on many scoreboards and made this observation:

“In nearly every major league dugout a coach or the next game’s starter uses a handheld clicker to count pitches during games. More and more ballparks keep pitch counts on scoreboards. Think of a kitchen timer: click, click, click … Ding! He’s done!”

Cody Nielsen wrote before the 2010 season in Bleacher Report wrote, “…Mark Prior, who was the most heralded college pitching prospect ever. He was Strasburg before Strasburg was. ” and he wrote, “Baker rode them hard for the entire season, sometimes allowing them to throw 120-125 pitches per start, something that baseball’s medical professionals urge against for young pitchers due to the tendency for the arm to get injured through overuse.”

The cautionary tale we told over and over was what happens to the arms of Harvey, deGrom and Syndergaard who all were over-used.  Will we be referring back to this article in the future?

Innings pitched is one thing, pitches per game another, and here is your MLB leaders in 2015 in pitches per game on average : http://www.sportingcharts.com/mlb/stats/pitching-pitches-per-start-leaders/2015/ 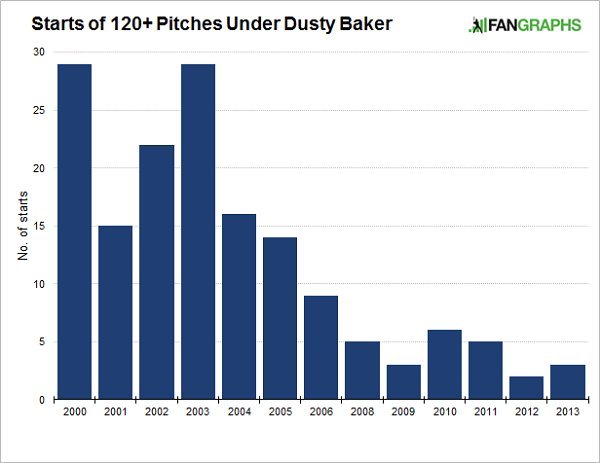 h/t to Rayvil for this graph via FanGraphs. This further supports our contention that Dusty Baker changed and evolved on pitch counts!

There is no way to ever say that Dusty Baker ruined Mark Prior as if you know anything for certain, but that won’t stop the haters that Dusty refers to. The Reds gave Dusty Baker another chance to manage, and he seemed to manage his pitchers to sounder pitch counts. Prediction: Joe Ross and Lucas Giolito, Eric Fedde, et al will be fine with Baker managing them.

Updated 11/10/15: The writer of the ESPN article, Andrew Latack, was kind enough to phone us.  13 years ago he was a sports journalist for ESPN then he went to Law School and today works at CAA in their sports division in NYC.  As you may know, CAA reps Ryan Zimmerman, Drew Storen, Trea Turner and Lucas Giolito amongst others.  We had a great “off the record” conversation about the article and cover art on that particular magazine.  I told Andrew Latack that he was prophetic in his ability at the time to know how important the pitch count was.  Remember his name as it might come up some day in a Free Agent negotiation!