Do you remember Colonel Jessep played by Jack Nicholson say those famous words to the Tom Cruise character? A lot of truth can’t be handled.  There were some tough questions asked and answered, and Rizzo shot down some very shoddy journalism.  We got Rizzo’s side of the Bud Black and Dusty Baker hiring drama and Dusty answered questions on clubhouse unity after the stories of Werth ripping down line-up cards and the Papelbon/Harper choke incident.

That led to Dusty saying, “A team has to be close.” .  That was a theme of the day and how communication is so important. He talked about “love” and “togetherness”. Dusty is aware of the clubhouse incidents with Werth and Matt Williams as well as the dugout incident of Papelbon and Harper and “love, togetherness, and communication” was a key message

Baker didn’t mention Papelbon, but did go on to say, “There’s always conflict at some point of time.  I’ve never been on a team that didn’t have any. I’ve only been on one team that had it visible like that on TV. From my military Marines days, you handle it like men and you talk about it, and you get it out in the open and you don’t let things fester. That’s the main way.”

"A team has to be close." – Dusty pic.twitter.com/pmWOHNDHYs 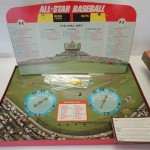 “Think Lucky” motto, and Dusty said that was actually originated by Luke Appling to apply to when you get that hit on a ball in the sun, a lucky bounce, a lucky play, and of course make your own luck. If any of you played Cadaco All-Star baseball in the 1960’s you’d remember Appling who played in the  1930’s to 1950 as he hit .388 one season and later coached Dusty.

Injuries have been a big issue for the Nats to key players, and you will recall Rizzo did not retain Lee Kuntz and staff.  We mentioned Paul Lessard before and while it’s not been announced it’s a “done deal” we were told last Thursday by one of our sources. Sources: Lessard to the Nats  During Dusty’s interview process,  he recommended Paul Lessard from the Reds to Mike Rizzo and Mike Rizzo was so impressed he hired Lessard before Dusty was even on-board.  I believe Lessard parted with the Reds last Thursday October 29th. Here’s a bio on Lessard from when he was hired by the Reds in 2009: REDS hire Paul Lessard

According to the website www.ManGamesLost.com , the Nats had 1,030 games lost to injury in 2015 with was the 7th most in the majors.

Here is a screenshot of 5 most recent years and you can compare the Reds and Nats and the Nats were the 12th worst team in the Majors and the Reds were right in the middle at 15th.  The Nats were an average of only 61 games a year worse than the Reds.  The Tigers were the best team in this period and you would expect AL teams to have a slight advantage using the DH which keeps some players fresh.

We hope Rizzo has examined all the factors closely. 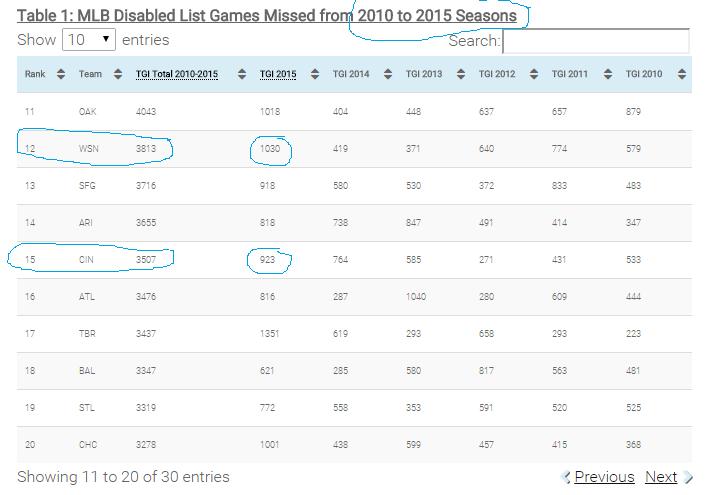 Dusty Baker for the first time fully covered the issue that has dogged him for years where people say he has ruined young arms. He didn’t dodge the issue.  The list included Mark Prior, Kerry Wood, Robb Nen, and some say Edinson Volquez.  The interview was from radio station 106.7 after the press conference:

This is our transcription of Dusty’s answer,  “And the people that are talking stuff about how I ruin arms, hey man, after 20 years, how many people don’t have somebody that’s had an arm operation? The last two years there have been more Tommy John than in the history of the game, and I wasn’t even in the game. So they can’t blame me for those. You look at the Cardinals. Wainwright has had two operations. Carpenter had to have a couple.  Garcia had a couple. You look at every team, it’s happening everywhere. There’s always haters, and you know something, go talk to my guys and see if I ruined them! Supposedly I ruined Prior?!? There was no such things as pitch counts, and we had unwritten pitch counts ourselves. Now this stuff is new with  Strasburg. If we had had the Strasburg kind of scenario and situation back then, then maybe this wouldn’t have happened, but there was no such thing at that time.”

Now we can debate what unwritten pitch counts are, but the fact is Dusty answered the question that has followed him for well over 12 years.

Mike Rizzo talked about how Dusty’s 2013 Reds team was 13th in defensive shifts which shows that the myths on Dusty aren’t true. This interview was from radio station 106.7 after the press conference focused on SABR and advanced stats:

“My reaction is, hey, those guys don’t know what they’re talking about.  If I didn’t care about on-base percentage, then why am I beating your butt all the time? You know what I mean? Now, what I said was, the walk, I think, is being overemphasized, especially with guys that can’t run the bases. And the name of the game is called hitting, it’s not called walking, and a walk is a byproduct of not being pitched to or fouling off enough pitches.”

Dusty Baker admitted that he had phone Matt Williams who once played for Dusty in San Francisco. Dusty has lost manager jobs 3 times now and he gave Matt Williams advice,

“Get a job in baseball. You may have to get a job as a base coach.  Get a job.” Then the more delicate issue was Dusty asking Matt about the Nats opening for manager that opened due to Matt’s dismissal.  Dusty told Matt that he was going to contact Rizzo and throw his name into the list of hopefuls. Dusty said he wouldn’t give details of the rest of their conversation.

Dusty's advice to Matt Williams: "It’s like your dog dies. Then you’ve got to go out and get another dog" (via @ScottSAllen and @JunksRadio)

The last 72+ hours was a whirlwind started by our Tweet that said there was a “snag” in the Bud Black deal:

Rizzo addressed the drama that played out in the media when Bud Black was announced as the new Nats manager prompted by James Wagner of the Washington Post.  There were several Nats beat writers that followed Wagner’s source, and at the time it seemed to make sense given it was during the World Series and the Nats would most likely wait for the World Series to end.

Going back to early morning on October 23rd on the Friday before the World Series, we broke the news that Dusty Baker and Bud Black were the finalists per our source.  It seemed to be a shock to everyone including us that Baker was a finalist: BAKER AND BLACK ARE FINALISTS .  Later that afternoon WaPo ran a story that Baker and Black were coming back for 2nd interviews.  We again reiterated that these appeared to be the only 2 candidates standing and this would be the finalists. MLB Trade Rumors credited us on the piece  http://www.mlbtraderumors.com/2015/10/latest-on-the-nationals-managerial-search.html

On Monday October 26th Black and Baker were both interviewed and we posted that Rizzo knew who the next manager would be BUT the contract would need to be negotiated.http://www.talknats.com/2015/10/26/breaking-nats-6th-full-time-manager-is-known-not-made-official/

On Wednesday evening during the actual World Series game the news broke from Wagner that pushed forward that Black was chosen.  There really was crickets after that until we tweeted the “snag” message.

Somehow Wagner posted this Tweet while it was basically becoming public that the Black negotiations were over and Rizzo was actually finalizing the Baker contract as we soon learned by Heyman and Nightengale.

Wagner says “For those wondering” and we all wonder how he could post that which seemed to lack a factual basis, but certainly he could have been given bad information? It was early in the 7am hour the next morning that Baker was officially named by the Nats as the new manager.

MLB Trade Rumors credited us with this “The TalkNats.com blog first reported issues in the contract negotiations.” http://www.mlbtraderumors.com/2015/11/nationals-manager-dusty-baker-bud-black-unresolved.html

Bob Nightengale of USA Today reported that Bud Black was offended by a 1 year contract offered at $1.6 million and Nats beat writers were pumping out stories on the drama only nobody got Rizzo’s side of the story until today.  Colin Cowherd went on a rant on how dysfunctional the Nats are and these media outlets were skewering the Nats and the Lerner’s are “cheap” chants started reappearing, but why? Dusty Baker got a 2 year deal at $2 million per year.  As Rayvil commented early this week, “Who cares where you start in a negotiation, it’s where you end.”

Rizzo says team negotiated simultaneously with new manager Baker and Black as the finalists.  Key word ‘finalists’ which is consistent to what our source told us 2 weeks ago from tomorrow.

“At the end of the day, it did not come down to money, it did not come down to term.  It came down to who were we, meaning the general manager-president of the team and ownership,  most comfortable with.  We definitely had financial parameters discussed with both at the same time. We felt that was the best track to go by because sometimes the negotiating process also tells you a lot about the people that you’re negotiating with. As we discussed baseball in the interview process, and parameters in the financial process, we came to the conclusion that Dusty Baker was the perfect guy for us.”

Rizzo, on if Black was offered job: "Black was one of the finalists. We definitely had financial parameters discussed with him and Dusty."

Rizzo called Bud Black a finalist and obviously Dusty Baker was making this consistent with what we wrote on October 23rd in our Finalist post.

Then the most bizarre from Aaron Oster of ESPN980:

Rizzo made it really clear that they never offered the job to Bud Black, and that money was not a consideration at all in the process. #Nats

So who is telling the truth?  Is it a truth thing or just a difference in the terminology?

The #Nats offered Bud Black the job Wednesday, and he accepted it, but did not start contract talks until Thursday. https://t.co/VPKD1HiFif

If Mike Rizzo is telling the truth 100%, a lot of these media people got it wrong, and some got it right or at least partially right, but we will probably never know unless Bud Black wants to weigh in.

But how do you explain this San Francisco newspaper article that Dusty Baker hadn’t heard a thing from Rizzo after the interview? Is the timeframe off? http://www.sfgate.com/giants/shea/article/Catching-up-with-Dusty-Baker-6603149.php

Will anyone apologize to the Lerners or Rizzo for all the hateful things they said or wrote?

Lesson 1: Don’t jump to conclusions and if you feel the urge, read this a few times

Lesson 2: We will never know the whole truth

This entry was posted in BudBlack, CoachingStaff, Dusty. Bookmark the permalink.
← Previous Article | Next Article →