We formed a group to reach out and talk to people who know Bud Black, and the resounding responses we heard over and over is “he is a great guy”, “a wonderful guy”, “someone you can talk to”, “a person who has your back”, “a Manager who believes in you”, and those words were spoken to us by every player we talked to in similar phraseology.

Current players with the Padres wanted to speak in anonymity about their former boss even though they had all positive things to say so we wanted to branch out to former players with other teams also in hopes of players who would speak on the record.  Every player was eager to talk. There will be a second Part B story as we have others that will be interviewed once Bud Black is officially named as the Manager.

From current Padres, we got the following quotes:

“Bud Black was just the most down to earth guy. I was once walking into the tunnel and there’s Bud talking to an IT guy and Bud is talking about IT. He wasn’t talking about himself, he was talking about the IT guy and what he does. Bud just has the ability to talk about your interests, your family, his family and relate. You could go to him with any problem.”

“The Man knows pitching, he knows defense, he knows strategy. He was given a tough situation here and he made the best of it. I wish him luck.”

“First thing that comes to mind about Bud Black is just a great communicator. Nobody was beneath him as he didn’t feel he was better than you. He would approach you and ask about how your day is going and genuinely cared.”

“Bud got involved with Celebration of Champions which was about kids stricken with cancer through [Rady’s] Children’s Hospital. He just didn’t go there to be a celebrity to attach his name with it—he was there as a caring and compassionate person who cared. Did I say cared? Bud brought his family and was just so genuine. It was touching.”

With a quick fact check, indeed there was Bud Black and Padres personnel involved with Rady’s Children’s Hospital of San Diego.

Bud Black had this to say about Rady’s Children’s Hospital: 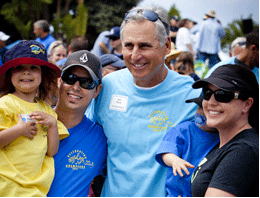 “Celebration of Champions is one of the most treasured events that the San Diego Padres are a part of. The players and I look forward to this event with compassion and emotion. It is truly one of our favorite days of the year.”

We asked everyone if there was anything they didn’t like about Bud Black in a constructive criticism type of way, and former players again couldn’t come up with anything except this interesting comment.

“The team spent a ton of money in ’15 and when the team didn’t win it meant change was coming. I didn’t expect it to be that quick. We lost our manager and then our interim manager [Pat Murphy 42-54], and certainly other changes are coming. It’s part of the business and it sucks.”

To that, you think to yourself it’s the situation that the team finally decided to spend money after years of being in the bottom of payroll spending and then they expect immediate results?  It doesn’t always work that way AJ!

Sure, Bud Black is going to be expected to win in Washington DC in 2016 because this is a team with a top payroll and star players and the young man [Bryce Harper] who will be the 2016 reigning MVP will help his offense and better than any player on offense that Bud Black will have ever managed making it a year of high expectations that Bud will have to meet. He is in this position to win and he knows that.

One player willing to go on the record was one of Bud Black’s pitching pupils who rose to stardom and national recognition for the playoff winning Oakland A’s in 2014 and this years surprise team, as the closer for the Houston Astros, and if you didn’t figure it out by those hints, we are referring to Luke Gregerson.  Luke has 3 perfect postseason saves with the A’s and Astros and a postseason ERA of 1.93. 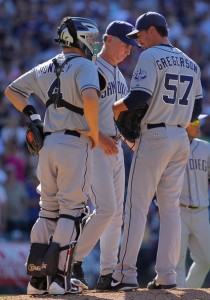 Gregerson spent his first 5 MLB seasons as a reliever with the San Diego Padres, and all under Bud Black’s tutelage, and was traded in his last year before Free Agency to the Oakland A’s who were bolstering their bullpen for the 2014 playoffs.  When I phoned Luke, the first words he said when I told him I was from Washington DC, “I know why you are calling”.  I did have to call him back as he was tied up, and the conversation was like it was with the other players with all the positives on what a great guy “Buddy” was; however, with Luke Gregerson, he wasn’t guarded with his words and spoke from the heart about a man who was integral in his ‘life’.  Gregerson was a 28th round pick of the St. Louis Cardinals and was traded to the San Diego Padres.  Gregerson had a fast trajectory only having spent 2 full years in the Minors and it was Bud Black who brought him up.

Gregerson had this to say, “Great things about Buddy as he gave me my chance.  Of course you have to win and produce but you need that chance and I got it with Bud. A week and a 1/2 into Spring Training and he saw something in me and he put me up with the Padres and I stuck with them from Spring Training and 5 full seasons.”

Gregerson talked about how everything doesn’t always go right as a Rookie, and Bud and his pitching coach stuck with him. Gregerson even had a Save in his Rookie season.

“They threw me right into the fire and before I knew it I was a 7th and 8th inning set-up man with some chances to pitch the 9th.  I was able to do it all. If I gave up 3 runs one day, I was out there the next day because Bud believed in you.  You need to have a short memory as a reliever.”  Gregerson continued, “It’s how you react and bounce back that separates you, and he prepared me along with the staff for where I am now.  Very influential in getting you ready mentally.”

Then we got off the subject to more of what we’ve heard from everyone about Bud Black, and we can repeat the theme from Gregerson, “Extremely open and easy to talk to. Enjoyable to talk to.”

Next was the best part when I asked if Luke had any criticisms of Bud Black, and Gregerson paused and laughed and said, “Bud’s gonna remember this one. Favorite story off the mound.  I’m not sure if I remember the situation exactly but I think I was in a 2 out, 2 strike count with a man on base and I gave up a 2 run HR. After I come off the mound and head back to the dugout, there’s [Bud] waiting for me on the top step of the dugout and Bud looks at me with a stare of anger.  I just looked at him and said, ‘You never hung a F***ing slider?!?’ and Bud calmly paused and said ‘Yep’ and we were good. I knew what I did. He knew what I did.  We talked about it some more.”

Gregerson talked some more about how he loved playing for Bud Black and his pitching coach Darren Balsley (pronounced Balls-lee) and how they prepared him for what has turned out to be back-to-back playoff seasons for Gregerson with the A’s and now the Astros. In fact, Gregerson signed a 3 year deal in Free Agency with the Astros, and says he loves it there too which is understandable given what the future looks like for Houston. Things are great for Gregerson as he was a star for the Astros with 34 saves that included the post-season, and it still goes back to humble beginnings as Luke got his big break from the Padres and the mental toughness, which is essential for a closer, was nurtured by Bud Black and Balsley.

As we asked everyone the question, why was the Padres offense so bad at times?  Gregerson answered that as a pitcher he didn’t know but had thought about it. Luke told me, “I tried to rack my brain on what it takes to push the runs across with regards to the offense. I think we led the league in wins when scoring 2 runs in a game.  We had those 90 wins in 2010 so something was working right that year.”

What was also impressive is that Bud Black would take calls from writers when he was the Manager of the Padres to answer questions on his former players. This was from Evan Drellich interviewing Bud Black on Gregerson about signing as a Free Agent with Houston as the presumptive closer:

“[Gregerson’s] got the stomach to do it, he’s got the head to do it and he’s got the stuff to do it, so why not? First thing’s first, they’re getting a very talented pitcher, performer. There’s a track record of performance, a track record of late-inning production. Luke’s been durable, he’s got weapons. Everybody thinks that it’s just the slider, but no, he’s got weapons. Good fastball, developing change and the slider.  A guy that we always counted on from a manager’s perspective, never had to worry about Luke. A guy that as he grew in service time, became one of the leaders on our team.”

Now you understand why Black’s former players would love this man.  Many managers wouldn’t take the time to answer a writer from another city about a former player. Just impressive all around.

We will add any updates we have, and we hope you enjoyed a glimpse into the person who could be your manager of the Washington Nationals!