The art of hitting is a combination of skill, positive thinking, a good memory, a plan, and a little bit of luck! 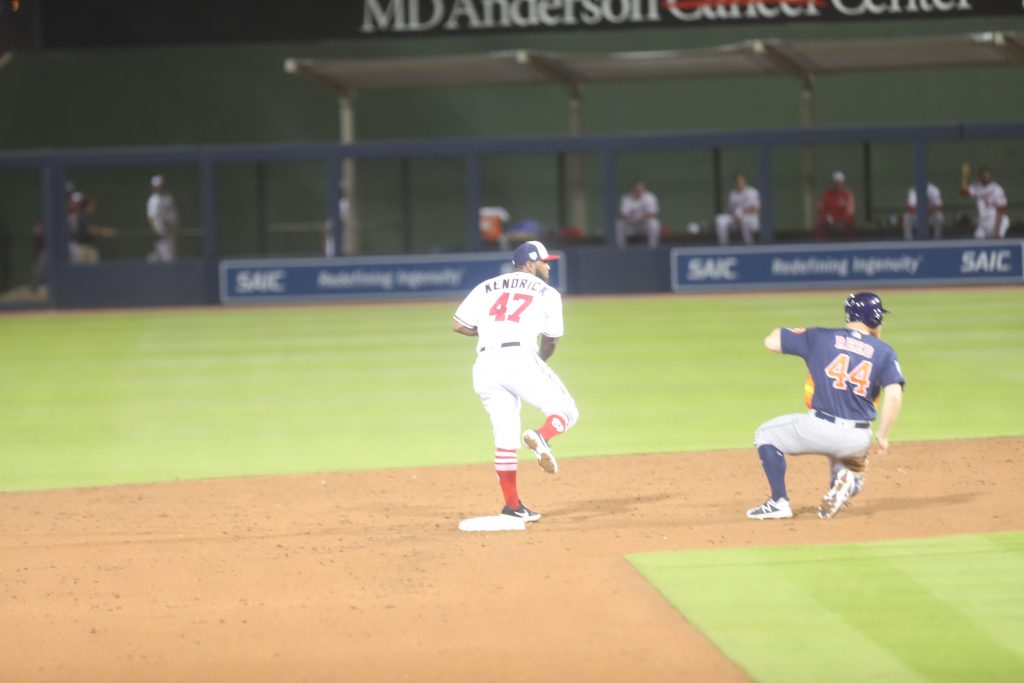 There was a time in Washington Nationals’ history that batters seemed to have no plan (approach) when they got into the batter’s box. They were young in 2008, and teachers need good students to be successful. There seemed to be an evolution change where Nats’ hitters seemed to be smart about their approach in the batter’s box and had a plan. Years of wisdom helps too in the game of baseball. Now with a young team, and system, you hope that these key essentials are being taught at the lowest levels of the Nats’ system.

“We have to have a clear plan and approach at the plate. Know what you are looking for before you get in the box. Once your mind is set on what that is lock it in and don’t miss!!” — Howie Kendrick a few minutes ago on his IG https://t.co/7MN1Dm2lj2 https://t.co/mbYhVAatq4

When the stakes were the highest, Howie Kendrick came up big for the Nats, and you can hear about his approach with his game-winning home run in Game 7 of the World Series in the video clip above, and of course his NLDS grand slam in extra innings.. But his spot in history probably does not happen if not for Juan Soto and Anthony Rendon. Huh, what? Soto might have changed the divine line of destiny for the Washington Nationals in the dramatic Wild Card game against the Brewers in 2019. But if Rendon did not learn from a previous decision on chasing high fastballs against Josh Hader, Soto probably never gets his chance. Follow along here who a walk by Rendon changed everything in a game with two outs.

Watch that Wild Card game again as a student of the game or just fast forward to the eighth inning. There was more to it than than the obvious — with Soto’s bases clearing single. A Michael A. Taylor HBP that survived a nail-biting challenge, and a lob wedge broken bat single by the veteran, Ryan Zimmerman, that landed in the only place it could — to not be caught as three Brewers fielders converged on it. Zim was inserted strategically as a pinch-hitter and that shattered bat should be bronzed. Every bizarre play that clicked into place seemed so unlikely at the time and then it added up to the improbable.

As a student of the game you must also watch that Saturday night loss on August 17th against the Brewers. In front of a nearly sold-out crowd at Nats Park, disappointed fans exited that 14-inning loss with multiple comebacks wasted. But don’t fret, what Rendon learned in the bottom of that 9th inning as the Maryland kid, Hader, schooled the 2019 All-Star on that day with two outs and the bases loaded. Were you paying attention? The winning run for the walk-off was dancing off of third base less than 90 feet away from homeplate. Rendon expanded his zone and saw nothing but four-seamers, and came up empty with a strike-3 swing and miss. There would be no walk-off on that night.

In the Wild Card game, Rendon represented the potential winning run in the 8th inning with his team losing 3-1 and two men on-base. He was reminded by his hitting coach, Kevin Long, that he should not chase the high fastballs from the Brewers closer. “Lay off of the high pitches” was the subtle message from Long. Trea Turner was given the same message and to no avail as he struck-out the same way he did on August 17. Sure enough, Hader went to the same approach from August 17th on Rendon too.

Some thought Hader was throwing fastballs because he could not locate his slider. All high fastballs worked the first time for Hader so why not try it again? This time, Rendon was patient, unselfish, strategic, a good student of the game, and he worked the walk, and earned his base because he stuck to his plan. What happened there was extending the hope. He laid off of that high fastball that was so tempting and loaded the bases for Juan Soto with two outs and a 3-to-1 deficit. Rendon did not chase. He did not try to be the hero — but he was a necessary accomplice. Tony did his part and kept the line moving with a walk. Now it was up to then, 20-year-old, Soto.

What happened next changed everything for every player who has ever worn a Washington Nationals uniform, manager, GM, and owner, and the fans. It was like exorcising the demons of postseason, past. How many times have the Nats been called chokers that never got past the NLDS? Soto’s at-bat was nothing short of the work of legends. But if Soto struck out in that situation, Rendon’s career with the Washington Nationals probably ends right there with big question marks. His 2019 postseason batting average would have been .000. His 2017 postseason batting average was .176. His 2016 postseason batting average was .150. When Rendon took that walk, Soto became the “Magic Juan’d” and sent everyone home from Nats Park with hope. That hope became the springboard for some of the greatest postseason performances in history by Stephen Strasburg, Anibal Sanchez, Patrick Corbin, Rendon, Soto, Zim, and Kendrick and so many others.

Lord, thank you for the 2019 NL Wild Card game pic.twitter.com/yc8FLNEqjV

That Soto single that cleared the bases off of Hader, and whatever you believe happened to that baseball when it met the turf in front of the Brewers’ right fielder, Trent Grisham, is part of the lore. If you believe in the baseball gods, maybe it was just the Nats time. From the challenged hit-by-pitch on Taylor to Zimmerman’s broken bat blooper to Rendon’s walk to Soto’s single — it had all of the elements of the game of inches.

“That ball is an inch foul, and it could have been an inch fair,” said Max Scherzer about a key Joc Pederson shot down the line in game 4 of the NLDS. A game of inches.

Yes, baseball is a game of inches, bounces, and split-seconds. A game of luck and a game of skill. They say the luck evens out over a long career. Soto’s ball bounced the right way, and sent the Nats packing for the NLDS in Los Angeles. Soto said he was sitting on Hader’s slider. The rest is history. But it all started with key at-bats with a plan.

“Baseball is 90 percent mental. The other half is physical,” Yogi Berra once infamously said.

Yes, Yogi was never great at math, but he was right about that mental part of the game. You have to be a positive thinker. Some batters envision their success before they actually step into the batter’s box. The distinct advantage is with the pitcher, and the good hitters just try to change that advantage as much as they can in their favor.