Daylen Lile is ready for anything after a rehab-focused 2022 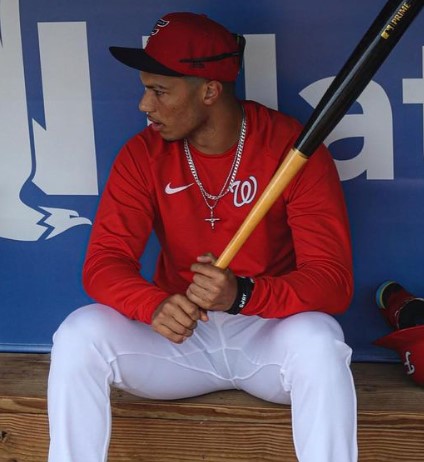 In the second round of the 2021 draft, the Nationals selected Daylen Lile, an outfielder with a smooth left-handed swing. Lile was the 80th-ranked draft prospect in his class and earned a reputation as one of the best pure hitters coming out of high school. A month later, he was getting his first taste of professional baseball in rookie ball. Lile, the Nationals’ 16th-ranked prospect, ended the season with a .219 batting average and .613 OPS in 19 games.

In February of 2022, Lile felt mentally and physically prepared for his first full year of professional baseball. After a productive offseason, he was ecstatic for the chance to demonstrate his growth playing for the Single-A Fredericksburg Nationals. However, professional sports have a way of changing the best laid plans. In March, Lile was advised to undergo season ending Tommy John surgery to fully repair his UCL, an injury that had plagued him for a few years.

“It started back in high school,” Lile told me on a zoom call. “Then, during Spring Training, it finally just gave out.”

Lile spent all of 2022 at the Washington Nationals Spring Training facility in West Palm Beach, Florida rehabbing his elbow. Losing a season is hard for anyone at any time in their career, but it’s especially difficult for someone as driven as Daylen Lile. He missed the fans, his teammates, and playing the game. It was devastating for Lile, but he stayed positive through it all.

“Staying positive was the hard part through this whole process, but I have a lot of people behind me that lift me up and motivate me to keep grinding. This is just a little bump in the road and it’s going to be an even better comeback.”

The rehab process for Tommy John surgery is long, tedious, and strenuous. It requires mind-numbing repetition of light exercises that target range of motion and ligament strength. For the first few months of the process, lifting of any kind is prohibited. The nature of the injury also limits the player from participating in any baseball activities (throwing, swinging, etc.) until they are fully healthy.

Each day after finishing his rehab work at the Ballpark of the Palm Beaches facility, Daylen would head back to the hotel. While he waited for the next day of rehab work, his friends and organization mates stayed to complete their baseball workouts. Knowing this made being away from the game that much harder. Fortunately, it was not all work and no play. The Nationals gave Daylen a chance to travel around the affiliates during the 2022 season to keep him in good spirits.

“(The Nationals) sent me to Fredericksburg (Single-A affiliate) for about a week, then Wilmington (High-A affiliate) for a couple days just to get out of Florida. Also, to see how the minor league life is, be around the fans, and some of my teammates.”

It’s easy to write-off a full year of serious rehab as a dead zone for development, but Lile used his time to improve his body mechanics as soon as he was healthy enough to do so. According to him, his lack of hip mobility was his most glaring issue. So, Lile and his hometown trainer, Maurice Urrutia, worked hard over the past year to target his mobility, explosiveness, and performance. The goal being to translate the improvements into power at the plate, route efficiency in the outfield, and speed on the basepaths.

And, while Lile was sidelined he had time to work with Nationals development staff to dissect his swing and find areas for improvement. He devoted his hours to studying film with strength and conditioning coaches Shane Hill and Gabe Torres to discover any tendencies worth adjusting.

“We would go back and look at old film and video, then look for certain stuff I needed to work on. Just little things like correcting my hinge to help me stay on my back side, staying in the right launch position, and not getting out on my front foot,” Lile explained. “Back then I used a lot of upper body and (my swing) was more my hands than anything. Now I’ve learned how to use my body from the ground up and sync everything.”

Today – 10 months post-surgery – Daylen Lile is medically cleared to resume baseball activities. With Spring Training around the corner, the plan is simple; see how he feels against live pitching for the first few weeks, then move up to Single-A and beyond once he’s back to form.

It’s safe to say he’s chomping at the bit to be back under the lights, in front of the fans, playing the game he loves. Lile has been working for the opportunity to put on a uniform again for almost a year. You better believe he’s going to make the most of it.