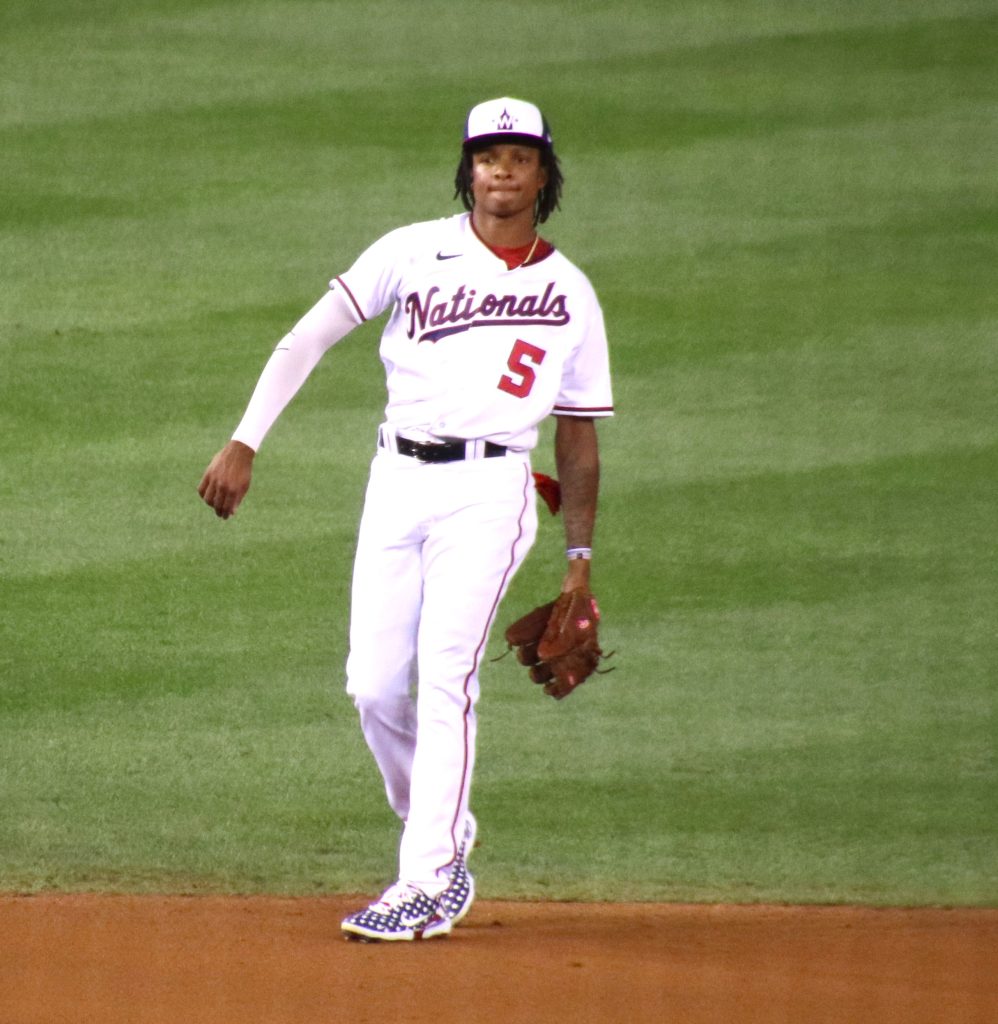 Two weeks ago, there were some Washington Nationals fans who wanted to send CJ Abrams packing to some farm, far away. He was hitting just .207 and looked kind of lost out there. Then all of a sudden he had some hits drop in, and his defense stepped up too, to an elite level.  There was a reason why the minor league analysts rated CJ Abrams as one of the best prospects in all of baseball. He ranked in Baseball America as high as the № 9 prospect in 2022, and he was a Top-10 prospect in the 2019 draft, and went 6th overall to the Padres.

Scouts loved Abrams’ elite athleticism, speed, and contact skills as a left-handed hitter. Some have compared him to Trea Turner at the same age, with similar tools and size at 6’2″ and a skinny 185 pounds. Of course the Padres drafted Turner also, and traded him to the Nats for a little déjà vu. Baseball America rated Abrams in a pre-draft analysis as “An 80-grade runner, Abrams gets out of the batter’s box well and posts sub-4.00 second run times regularly.” Then he had a leg injury and that dropped him to a 70-grade runner, which is still in the top 10 percent.

The speed tool is still excellent with an average sprint speed of 29.1 which ranks him in the top 8 percent in baseball, and to give you perspective, Lane Thomas is the fastest on the Nats at 29.3.

Some worried that Abrams wouldn’t stick at shortstop, while others worried he needed more time in the minors to develop. In his time in the big leagues after his debut earlier this year with the Padres, Abrams was ranked as a -3.0 OAA at shortstop which had him below average. One of the issues is he plays so aggressively that he has had issues with throwing errors.

CJ Abrams is a difference maker with the glove, arm, bat, and speed. That’s a 4-tool player. #Nats https://t.co/Ast5LVDNTb

The good news is that Abrams’ OAA with the Nats now has him as a +1 fielder , and since that is a cumulative stat, you could extrapolate that to a full season at +6. He started slowly with the Nats, and in the past two weeks went from a -1 to a +1, for a +2 improvement in just two weeks. A +6 OAA would rank Top-10 in baseball. The good news, with time and hard work in pre-game prep, Abrams has improved markedly in his first month with the Nats.

The bad news is that Abrams has no walks in the month of September, and just one since he was called up by the Nats. The great news is that his K rate is only 15.8% and that has improved over his time with the Padres. While he has no home runs, he hits the ball hard, and deceptively hard. He is mostly a top-spin hitter which takes distance off of balls in the air, and he is a lower launch angle hitter. With some adjustments and adding muscle, his power numbers could certainly increase. His hard hit percentage is 33.3 percent, and his line drive rate is 24.4 percent. Both of those stats have improved with the Nats over his Padres tenure. It’s his oppo approach which is most noticeable with the Nats at 23.2 percent which is nearly a 10 percent improvement over his time with the Padres. That has all factored into a better hitter for average with the Nats over the Padres. But he has been an unlucky hitter with only a .280 BABIP versus a league average of .290.

The hardest hit ball in the game from all batters:

But with Abrams’ speed and hard hit percentages, you would expect a higher batting average. His power will develop, and he is getting some extra base hits. Give it time, Abrams is still just 21, for another 16 days.

What is most impressive is Abrams’ defensive instincts, with his solid jumps and reaction time on groundballs and a reach at the last split second to glove balls. He has used his athleticism to turn Web Gems and this has made his pitchers look better. It is all backed up in hard data in the stats. Defense matters as we say over and over, and before Abrams arrived, the Nats were horrific as a team on defense, and dead last in the majors. The Nats are now sixth overall on team defense since Abrams arrived.

“I love everything he’s doing right now,” manager Dave Martinez said this week. “I’m watching him making plays that I haven’t seen made in quite a while.”

The Nats’ manager is right. We have not seen sparkling defense like that since …uh… Turner was in a Nats uni, but truthfully, Abrams is slightly better in my opinion, although Trea still has the edge in the speed, power and hit game. Time will tell of course how Abrams develops.

“I take pride in my defense, getting outs,” Abrams said. “Anything to help a pitcher, and help him get W’s.”

Speaking of stats and hard data, there is Abrams in his first 15 starts, slashing an awful .148/.193/.167 with a laughable .360 OPS, versus Abrams in his past 11 starts looking like an All-Star, hitting .341 with an .818 OPS.  In the books, Abrams overall final statline will look bad for his rookie season. You just can’t erase those first 62 games combined with the Padres and Nationals. But his improvement is what should excite anyone who can see beyond the normal stats. You might be seeing the real Abrams of the future breaking out here recently. That fine wine needs time to age and breathe.